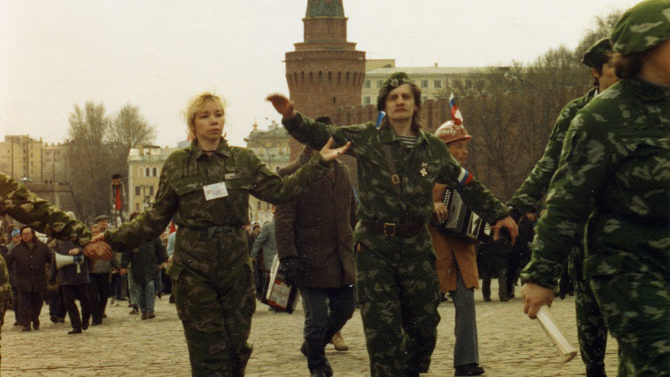 People tell me to “lighten up.” Life is too short for all this political negativity, they say. Quit marching, quit calling, quit complaining. But I won’t stop opposing President Trump and his un-American actions for two reasons.

I lived in Russia right before and right after the collapse of the Communist regime, first as a student and then as a journalist. I saw the results of living in a country where everything—the papers you read, the conversations you have with your neighbors, your job—is based on whichever version of reality the state decrees that day. I saw the cynicism and hopelessness that comes with a steady diet of blatant lies from your leaders. “Why bother?” most everybody said. “Let them lie and steal. It’s what they do.”

Trump, with his glib lying, hand-picked media and Potemkin rallies, is our first Soviet president. His supporters may not care that our president admires and defends Putin, a dictator and ex-KGB man, but I do. Republicans in the House and Senate may not remember the blood and capital America spent fighting the Cold War, but I do. Watching our know-nothing president wasting that victory makes me angry on behalf of the people who won it.

The second reason I’ll never stop speaking out against Trump and his attempts to Russify my country is more personal and harder to talk about, and has to do with the people like the ones in my photograph.

These men and women were veterans of the disastrous Afghan War (“the Soviet Vietnam,” we used to call it, until we had our own disastrous Middle Eastern war). I watched as the veterans marched around the Moscow square in silence, in uniform, holding hands with the other people they’d served next to.

“They’re protesting the Communists,” whispered a woman straight out of babushka central casting.

“Why?” I whispered back. It didn’t seem right to talk.

The men and women—maybe 60 of them?—continued their march around the square. They carried no signs, made absolutely no sound. It was unnerving, this silence, so I left the square. Twenty minutes later, I was just about to round a street corner when a yowling mass of people tore around it first. They crashed into me without slowing at all, and knocked me over exactly the way waves used to back on Jacksonville Beach when I was five. I curled into a ball and hugged my knees as the veterans from the protest and hundreds of unlucky people caught up in the crowd ran over me. They were screaming in terror, heads down, running for their lives.

I sat up in the middle of the street after they passed. They’d carried and kicked and tossed me a good ways down it, I saw. I started checking myself for injuries and then stopped.  “What were they running from?” I wondered.

I crouched against a wall as, helmets down, shields up, clubs raised, hundreds of police in full riot gear caught up with the back of the first crowd and began beating people. They were not beating the veterans, just people dressed in office clothes whose shoes were no good for running. A van sped around the corner, and the police began heaving unconscious people into the back of it.

A blond man in a brown suit ran up to the wall and cowered there next to me. The policeman who was chasing him came after. The policeman raised his club to hit someone. His visor was up, and he looked straight at me. His eyes were blue.

“Who wears sandals with suits?” I thought. Then I passed out.

It costs me a lot to show up at rallies, because I’m afraid of crowds. But, I tell myself, you have nothing to fear. This is not Russia. This is America.

True, the way we treat our veterans is uncomfortably similar to Russia, but there is still so far to go. In America, journalists are not murdered for writing articles because, despite what Trump says, America is not run by murderers. In America, I can start a business, eat at a restaurant and drive down the street without having to bribe somebody, because America is not run by thieves. And in America, I can peacefully protest without being beaten, because America enforces its Constitution.

So I hear the people who tell me to lighten up. But way more than them, I see the people in my photograph. They are people who fought for their country, and I think about them while I fight for mine.