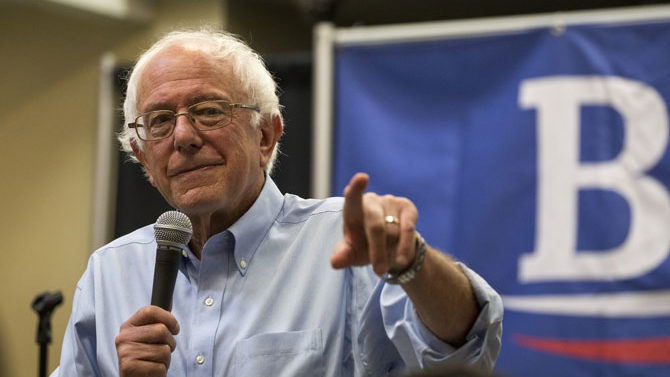 The presidential primary election is almost here, and Georgia has the exciting opportunity to elect a leader who will fight for justice, equality and the working class. That’s why I’m happy to announce I’m endorsing Sen. Bernie Sanders.

Sanders often calls income inequality the “great economic issue of our time.” Athens has the eighth highest rate of income inequality of any city in the U.S., according to Bloomberg News. Sanders will prioritize a living wage by raising the federal minimum wage from $7.25 an hour to $15 an hour, because nobody who works 40 hours a week should be living in poverty. Sanders will also prioritize putting the Paycheck Fairness Act into law so women in Georgia will stop getting paid only 83 percent of what their male counterparts make. And finally, under President Sanders, the millionaires and billionaires who make up the 1 percent will pay a higher tax rate on the wealth they hoard.

Another issue Sanders is discussing that should resonate with the residents of Athens is the cost of tuition at public universities and the amount of debt that is heaped upon the graduates of such institutions. The cost of tuition has more than tripled over the last 15 years at the University of Georgia, outpacing the funding of the HOPE scholarship, and the average four-year graduate in Georgia receives not only a diploma but $26,000 of debt. We need Sanders’ vision to fight for tuition-free and debt-free college. This idea is not radical; it is being done in countries around the world and is not too far removed from the HOPE scholarship. Let’s increase the number of diplomas, not debt-collection letters!

Athens is also struggling with infrastructure issues ranging from a great lack of sidewalks and bike lanes to incomplete Internet availability to insufficient public transit funding to aging sewage systems, bridges and roads badly needing attention. With limited local funding and a GDOT list that is ever-growing, Sanders’ plan would help tackle these issues by investing $1 trillion over five years in infrastructure. This plan would also help create millions of jobs across the nation.

Sanders has delivered a plan to support the children and families of Athens. Bernie’s plan centers on enacting a universal child care and pre-K program, and putting in place guaranteed paid family and sick leave. We must break away from a system that ties the quality of a child’s education to the amount of money the child’s parents make. All Athens families deserve access to quality education and child care for their kids during the formative years of 0–3, so they are prepared and not at a disadvantage when they start kindergarten. We also need to make sure parents are able to take care of themselves and can all be able to spend that precious time with their families.

Now, I know the arguments against Sanders, but they don’t stick. They say Bernie is unelectable, but actually, a Quinnipiac poll released on Feb. 18 showed him not only polling better than Hillary Clinton but defeating every GOP candidate. They call Bernie a “socialist”; he is a democratic socialist and embraces “socialist” ideas such as public schools, national parks, publically maintained roadways and public fire and police departments. They say these are impossible, radical ideas; Bernie’s platform is made up of logical plans that have been successfully executed and proven to work. They say these ideas are too expensive, but Sanders would use the elimination of tax loopholes, a more equitable tax code and a better prioritization of spending to pay for these items. You can see a specific breakdown on his website, BernieSanders.com.

What I ask of you is not just to vote for Bernie Sanders on Mar. 1. What I ask of you is to become a fighter, in your own way, for social and economic justice. Please reach out to your neighbors and have discussions, get involved with your schools, hold your elected officials accountable at public meetings or via correspondence, use public transit and other alternative transportation options, volunteer in your community, and work with advocacy groups such as Athens for Everyone. Because touching “Bernie Sanders” on that screen is just the beginning.