ACC Shouldn’t Be Profiting Off of Inmate Phone Calls

At the Sept. 6 Athens-Clarke County Mayor and Commission meeting, commissioners voted on a contract that would bring in $1.25 million in revenue over the next five years. No public funding would be necessary, and almost all labor would be provided at no cost to the county. When it came time to vote, it passed easily, with eight of the nine commissioners present voting in favor.

So what’s the problem? The contract is with a for-profit prison technology company, and the revenue is coming from the families of those who have had the misfortune of being incarcerated in our county jail, guilty or not.

The Clarke County Jail outsources its inmate phone service to a private prison company, currently Securus Technologies. When an inmate makes a collect call, the company charges fees to the callee, takes a percentage for itself and kicks back a portion to the county. County Manager Alan Reddish said, “It’s a practice we’ve been following in this community for many years.” 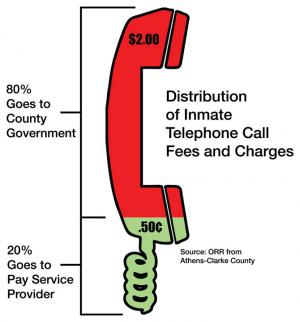 The specific contract passed last month gives ACC an exceptionally high commission of 80 percent, meaning that the county takes 80 percent of the money collected from each call. These calls should bring in about $312,000 a year; Securus Tech will take 20 percent of that for its services and will give the jail the remaining $250,000. That’s the kind of markup you can expect from ticket scalpers selling UGA-Georgia Tech tickets. County revenue, no matter how badly needed, should never be raised in such a way and at such an exorbitant cost to citizens.

Even worse, a majority of the money will be coming from Athenians who are under the poverty line. Nationally, 53 percent of those arrested are already in poverty, and since people above that line can normally afford bail, 80 percent of people who end up filling jail cells tend to be in or near poverty. Most of the calls we’re talking about are being made by the people who stay in jail, not the ones who had the money to get out. Minutes turn to hours, days turn to weeks, and those unable to pay bail sit in their cells awaiting trial. Once the poverty-to-jail-to-poverty cycle starts, it can be hard to break. Even those who are presumed innocent are punished financially, physically and emotionally before they have a chance to defend themselves in court. Seventy percent of the inmates in the Clarke County Jail this past January were awaiting trial.

There is something morally wrong with making money off people you are holding captive. Commissioner Andy Herod noted, “There does seem to be something distasteful about making a quarter of a million dollars off of phone calls from inmates at the jail,” right before he voted to approve the contract to Securus Tech.

County officials say the jail is very expensive for them to operate, which is true, but not because of phone calls. The jail is so expensive because of the huge growth in the number of people held in jails and prisons. Over the last 30 years, the number of people being incarcerated nationally has increased by 500 percent. The war on drugs, rise of private prisons and policies that punish poverty with jail time have all contributed to this increase in incarceration. If we want to lower the $11 million operating budget of our jail, we should continue to look at ways to jail fewer people, not make money off the families of those in jail.

County officials are quick to point out that Securus Tech offered much lower call and fee rates with this contract compared to previous contracts. This is certainly true, and I was confused why a profit-driven private prison corporation would all of a sudden offer its services at these lower rates. Have they seen the error of their ways? More likely, it’s because the Federal Communications Commission may be handing down a ruling on Oct. 22 capping these inmate phone fees and rates very close to the ones offered to the Clarke County Jail. We have a situation where a private-prison corporation is prepared to lower the amount of revenue it receives, but Athens-Clarke County is eager to increase its cut.

Many commissioners seemed not to be aware of the implications of this contract when they voted on it. I hope now the Mayor and Commission will see how this negatively affects our community and vote to end this policy next year. I’m not advocating for the county to pay for the calls, but I’m asking that the 80 percent kickback be ended, and that callers only pay the cost of the service. With this new information, five commissioners have already admitted to me privately that the county needs to look at changing this practice. We cannot let our Mayor and Commission pass policies that perpetuate systemic poverty. Please, ask your commissioner to stop raising revenue in this way.

The Mayor and Commission often hear from people of privilege about things like historic districts and sidewalk cafes. People of privilege need to be just as willing, if not more so, to stand up for our neighbors whose voices are silenced by poverty, inequality and jail cells. The phone is ringing. Answer the call.

Tim Denson is a co-founder of Athens for Everyone, an organization pushing for progressive policies in local government.