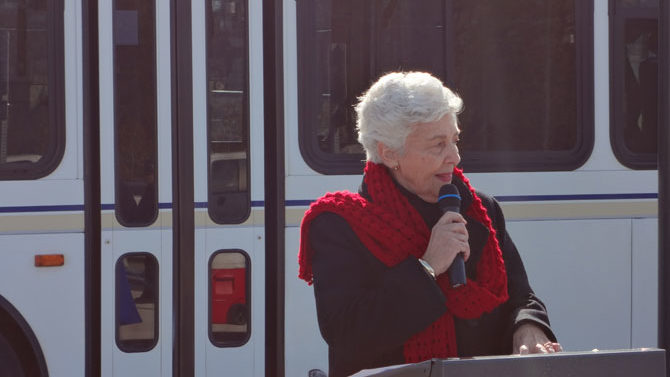 Athens, it’s time to stop beating up our public transit system. For years now, our transit system has been hit in every way possible—lapped with repeated fare raises, cut by slashes in service and strangled with a continuously tightening budget. The decision-makers walk away unscathed from these actions while the hardworking Athenians who rely on our transit system show the bruises.

We can begin to heal these wounds by funding Sunday bus service. A new initiative request for Sunday service has been submitted by the resourceful people at Athens Transit. This is a great opportunity for our Mayor and Commission to start mending our public transit system.

The last few years have been tough, and the recession bit into every department and budget. Routes have been shortened, night service cut back an hour, fares raised to a steep $1.75, and local funding for our transit system has declined by 40 percent since 2009.

Athens for Everyone has been surveying current and potential transit riders since November on ways to improve our system. In these surveys and interviews, Sunday bus service has been the most often cited improvement that users would like to see.

Many Athenians, especially those going through hard financial times, have no or limited access to a car and rely on the bus for everything from medical needs to visiting family to worshipping. That’s why many churches such as Hill Chapel Baptist and Athens Church have signed on to ask for Sunday bus service.

On Sundays, those who rely on transit must walk along dangerous highways in deep-cut paths in the clay and weeds. They are forced to burden friends and families for rides, if they are so lucky. They risk riding bikes along roads that were designed with no thought or care for cyclists. Many, including the elderly, must surrender their Sundays to being shut in their homes.

Adding Sunday bus service will help more than just bus riders, though. As the Athens-Clarke County website states, “every dollar that U.S. taxpayers invest in public transportation generates $6 or more in economic returns.” Transit users would be able to go shopping and spend their money, convention-goers would be able to get to our fine restaurants, visiting Dawg fans could easily venture out from downtown, and local businesses would have workers with reliable transportation and increased weekend sales. This would all help to drive up tax revenue, which could then help to finance Sunday service.

Even at a time when county revenue is increasing, our elected officials will say, “We can’t afford it.” But it is estimated to cost around $364,000 to implement Sunday service. After subtracting the nearly $71,000 in estimated bus fares, the cost comes down to $293,000, or just 0.2 percent of the 2015 general fund. In 2009, 2.8 percent of our general fund went to transit, but in 2015 only 1.7 percent. At the same time, the general fund grew by 3.8 percent. The transit department has done an unbelievable job with the funding it’s been given; just think of the great things it will do if we give it a little bit more.

I also worry that the upcoming $120,000 transit study could be used, intentionally or not, as a stall tactic ushering Sunday service into that purgatory of good ideas forgotten. The only study that is required to know that Sunday service is needed is to ride the bus. There you can talk to the Clarke County teacher who has a vision impairment and can’t get her kids to birthday parties on Sundays. Talk to the man who has to walk four miles on Sundays to get to work and keep his job. Talk to the elderly woman who can’t go to church on Sundays anymore because she now relies on The Lift.

Transit keeps our roads safer, our air cleaner, our economy growing and our community stronger, all while getting us where we need to go. With our community facing big issues, such as a 38 percent poverty rate and an income gap big enough to drive a bus through, it’s time that our leaders start making decisions that can help alleviate those problems.