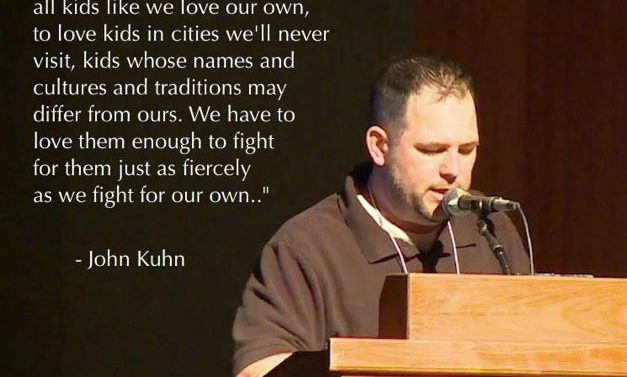 Last weekend I had the privilege to attend one of my favorite conferences ever, in Austin, TX, where nearly 500 public education advocates from all over the country (some 30 states I am told) gathered to learn, commiserate, share, listen, engage, talk and have at least some fun as we all sought ways to more effectively advocate for strengthening, not dismantling, our nation’s public schools. What a concept, right? Far from any talk of giving up on public education, the people who packed the NPE conference are speaking out, writing, demonstrating, asking questions, showing better solutions and pushing back against the false cures packaged and sold as “reform” to an unsuspecting public. As a board member of NPE, I had worked for months to help organize this maiden voyage/grand experiment. We wanted to provide a place where parents, teachers, students, academics, officials, commentators, people in general, could come together to find each other, share and activate and identify better ways to improve our schools and the quality of education they provide for their students. Taking advantage of holding the meetings at the University of Texas, we also planned it to immediately precede the massive SXSW edu conference being held at the convention center not far away. Quite a few people registered and attended both conferences, so as we had expected, Austin was ground zero for education policy talk last week. And we come away from the conference with some concrete and realistic ideas for turning that talk into action, at the local, state and national levels. (Some good pictures from the various activities of the weekend are here: bit.ly/1fVrwJh) The official photographer for the event was UT-Austin student Carlo Nasisse, Clarke Central HS Class of 2012 and Georgia HS Champion Journalist of the year for 2012!)

The highights for me were many, so here are a few:

• The panels and workshops were very well done, and the only problem was there were too many good ones occurring simultaneously; you simply could not get to every one that interested you. So, you had to just pick your spots and make your choices and hope to catch the others someday on the Internet (and quite a few of them are streaming here schoolhouselive.org) My first panel, on Saturday morning, was one I had helped to conceive and was moderating: The Role of Parents in the Advancment of Public Education. It included heroic parent leaders from three cities: Helen Gym from Philadelphia, Jessie Ramey from Pittsburgh and Karran Harper Royal, from New Orleans. All of these public school moms have been through different strains of reform policy in their towns and in their schools, and each had stories and strategies to share and discuss. The crowd was full of parents, too, from Newark and MInneapolis and beyond, from suburbs, major cities, rural communities and small towns, east and west—a room packed full of parents who want to know how to better advocate for good schools for their kids, and everybody’s else’s kids too. It was powerful and not the last time that weekend I wished the allotted time of 75 minutes had been longer. We could have gone on for hours.

But we had other panels starting in a few minutes, and I was especially interested in the one called Framing the Message: Winning Hearts and Minds. This one was all about ways to counter the marketing budgets and heft of the forces behind what is being pushed as the dominant narrative about “failing schools” and “choice as the answer” as policies get geared toward corporate “solutions” like charters, vouchers and the various elements of “test-driven reform.” The facts we cite and the language we use are important to framing the dialog in ways that lead to helping bolster public opinion that good and effective public schools are a vital public good, distinctive in their ability to raise up young citizens prepared to participate fully in the civic life of a democratic society. The panelists were all stellar: Jeff Bryant of the Opportunity to Learn Campaign, Natalie Blake of the Z. Smith Reynolds Foundation, Brian Dunn of the National Education Association and Sabrina Joy Smith of Integrity in Education. Again the large seminar space was standing room only and from the Q&A you could tell the discussion had provoked some new ways of thinking about the issues and the presentation of the facts and stories.

• The rest of the panels I attended on Saturday and Sunday were equally compelling—an investigative journalism panel featuring some prominent bloggers and journalists whose work ended up inspiring major articles in mainstream outlets, providing evidence of the need for people willing to do the digging for the stories of what is really happening at the granular level, in the classroom and on he ground. And a panel on Corporatization and Privatization featured the K-12, Inc whistleblower from Oregon, who went public with the horrendous teaching and learning conditions at so-called virtual charters which are increasingly sold as a solution in the reform toolkit. And I missed panels on TFA, Testing, Student Activism, Educators Organizing Resistance… there was no way to be in two places at one time, and there were so many worthwhile panels being held simultaneously.

• Lunches and small dinners meant I got to spend time with people from all over—Athens, Decatur, NC, LA, some AmeriCorps volunteers, board members I only met for the first time at the conference, NYC, Boston—a nice mix of folks, and all in Austin for the same purpose. Those visits and people were highlights as well.

• The keynote addresses were all as inspirational as I’d expected: Karen Lewis, of the Chicago Teachers Union, and John Kuhn, superintendent of a rural district in Texas, gave rousing and engaging calls to action to parents, students, teachers, communities all working together to reclaim the mantle of real reform of our schools—to advocate for good schools for all kids, led by teachers with experience and dedication to each child they teach. Diane Ravitch, speaking on Sunday morning at the traditional church hour, delivered one of the finest speeches I have ever heard from her, specific in its indictment of those who seek to drag down our schools and turn over our children to those whose motive is profit over all. But she was also very clear as to what we need to be pushing for as a positive agenda, the kinds of schools all children need to succeed. These keynotes served as great bookends that bolstered the many messages that emerged during the workshops and panels that went on all weekend. The theme of testing, overtesting, misuse of testing results, the harm all this is causing our schools and our students—that theme was clear all through the weekend in so many ways. Here’s a good writeup of John Kuhn’s spirited keynote on Saturday: bit.ly/MLu9jI.

On the final day of the conference, the Board announced a call for congressional hearings on the proliferation of standardized, high-stakes testing that is driving education policy with such negative outcomes. We announced it at the conference and the next day, at the SXSW edu conference, Diane Ravitch highlighted it in her speech to that group. By Tuesday, our co-founder Anthony Cody asked a panel on accountability at SXSW, featuring Randi Weingarten of AFT and Peter Cunningham, ex-spokesperson for Arne Duncan at the Department of Education, whether they supported this call for hearings, and both responded that they do. Day by day, people all around the country are realizing that while accountability is important, the pendulum has swung way too heavily in the direction of metrics over all, that the standardized testing regime is harming, not helping, teachers’ efforts to reach every child and provide all of them with a meaningful and effective education. See this story for some nice coverage of the call for hearings and some fallout at the SXSW edu event: wapo.st/1kVY6tz. 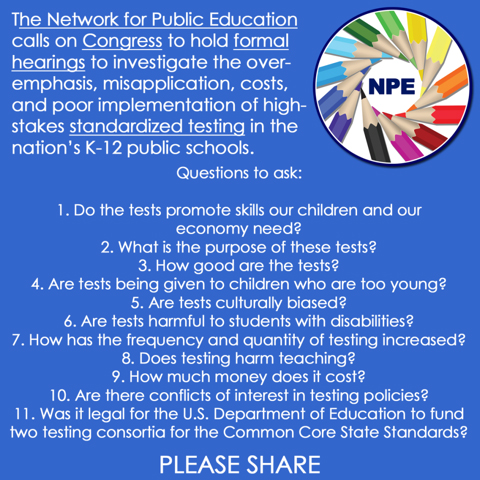 On the morning I left Austin, Valerie Strauss published my op-ed on her widely read education site of The Washington Post: wapo.st/1e2rFEW. I’d worked on it for a while and had received a lot of editorial assistance from friends from all over, so it was nice to have it finally see the light of day. I was inspired to write the op-ed out of my growing concern that the local public high school experience that’s been so good for our older (11th grade) daughter and her many friends from all over—that Clarke Central HS really might be drastically different in a very short time, and not in a good way. It will be forever changed for the worse if the macro-forces driving our educational system toward accountability (testing) run amok, driving all the best teachers away, which we are seeing signs of increasingly.

To summarize, the first-ever NPE conference was an intense, intelligent, positive meet-up of likeminded souls, all of whom are dedicated to a certain, unshakeable principle: that each child deserves a good school and a good education. How we get there is a huge challenge, of course, but fortified by the knowledge that there are so many hardworking, creative, brilliant people also working on this ongoing cause in every corner of the country meant for me that #NPE Austin was a reassuring, necessary, confidence-building exercise. I hope we do it again, and I hope it is even better than this first one last week in Austin. Stay tuned.