Eugene Talmadge, Georgia’s Most Hateful Governor, Doesn’t Deserve a Bridge Named After Him 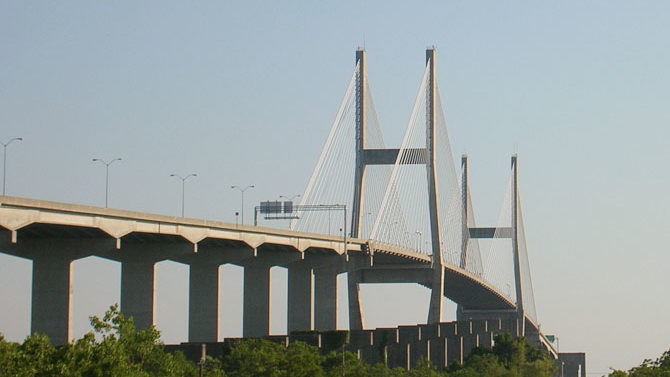 Though the Ol’ Bloviator has some qualms about wholesale destruction of flags, statues and other monuments to the Confederacy, he has been hollering for years that they have no place on state or local government property, as they imply a continuing affinity to the cause of white supremacy.

It should follow readily enough then that no public highway or bridge should bear the name of Eugene Talmadge, one of 20th Century America’s foremost political fomenters of racial hatred and persecution. Even in these sad times, it seems difficult to believe that the powers that be in Georgia would resist an effort—by the Girl Scouts, of all people—to rechristen the Eugene Talmadge Memorial Bridge in Savannah in honor of Juliette Gordon Low, a Savannah native who founded their hallowed organization.

A recent New York Times report indicates that previous attempts to strip Talmadge’s hateful moniker from the bridge that is effectively the gateway to Savannah have come to grief “in the backrooms and boardrooms of Atlanta” and that some of the state’s lawmakers claim that “over the years… Mr. Talmadge’s relatives have warned legislators against altering the name of the bridge.” These efforts apparently included intense lobbying and threats of political reprisal against anyone who supported renaming—“I’ll raise $100,000 just to beat ya.”

Most of the pushback against renaming the bridge seemed to come from the relatives and associates of Eugene Talmadge’s son, Herman, who passed away in 2002. An arch-segregationist in his own right when he was elected to the U.S. Senate in 1956, “Hummon,” as he was known hereabouts, was governor of Georgia when the bridge officially named for his father opened in 1954. Though members of the family were loath to speak on the record, Lynda C. Talmadge, Sen. Talmadge’s third wife and widow, did allow that “if people looked into the history and the record and the contributions and the things that the Talmadges did, they’d see that it’s warranted to be named Talmadge.”

Fair enough, Ms. T. Since it’s Gene Talmadge whose name is the focal point of the current kerfuffle, let’s just have a look at his “history and record.” In his three terms (1926–1932) as Georgia’s commissioner of agriculture, Talmadge was charged with violating a state law requiring him to deposit fees collected on fertilizer in the state treasury (rather than in banks owned by his friends, as he was wont to do). He was also criticized by a state Senate investigative committee for paying himself and family members more than $40,000 in salaries and expenses, and using state funds to underwrite his annual trips to the Kentucky Derby.

His tour de force, however, was a purported scheme to raise hog prices in Georgia by using state money without authorization to buy 82 rail-car loads of hogs, which were to be purchased at prices just under the going rate in Chicago, and having them shipped there for resale. The hogs lost considerable weight in transit, and other complications resulted in the loss of more than $12,000 in state funds. Resolutely defiant in the face of all the charges—and evidence—against him, Gene would go on to use accusations that he stole state money to buy the hogs to great political advantage.

A master manipulator of Georgia’s infamously malapportioned county-unit system in which the total of about 1,200 votes cast for him in three sparsely populated rural counties like Gilmer, Glascock and Lincoln effectively canceled out the approximately 26,000 votes for his opponents in Fulton, Talmadge readily confessed to his loyal following in the countryside that he had sure enough “stole them hogs,” before adding quickly, “but I stole for you!”

This brand of politics propelled Talmadge into the governor’s office in 1932 and 1934. During his first term, he distinguished himself by granting three times more pardons than the state prison board recommended, raising reasonable suspicions that he was running a “pardons racket.” When the legislature refused to approve cutting the price of automobile tags to $3 across the board, he achieved it by executive order, further endearing himself to the country folks, even as his action drained away desperately needed revenues for their local schools.

Despite his promise never to do so, after textile interests contributed some $20,000 to his re-election campaign in 1934, as soon as the votes were in, he declared martial law and used the National Guard to break an ongoing strike, incarcerating the dissident workers in a hastily arranged concentration camp near Atlanta. He would soon summon the troops again, this time to physically remove the state treasurer and comptroller general from their offices for denying him access to funds not officially appropriated by the legislature, capping this dramatic show of force by ordering the vaults cut open with blow torches and the monies removed.

Talmadge’s disdain for the New Deal was obvious from the start, and his contempt for its architect only marginally less so, as evidenced by his scornful reference to Franklin Roosevelt as a president who couldn’t get out of his wheelchair and “walk around and hunt up people to talk to.” (If your thoughts are straying at this point to a contemporary politician occupying a considerably more critical post who is also given to bullying, strong-arm tactics and mocking the disabled, consider your analogy validated.) Such crudeness didn’t appear to hurt Talmadge in Georgia that much, but in those days—as opposed to these—it seemed to affirm his unsuitability for higher office, specifically for representing Georgia in the U.S. Senate, as his unsuccessful bids to unseat Richard B. Russell in 1936 and Walter F. George in 1938 appeared to indicate.

Talmadge would be back for another gubernatorial run in 1940, however, and once in office, he would constitute what amounted to a one-man wrecking crew where higher education in the state was concerned. Vowing to purge Georgia’s colleges of sympathizers with “racial equality,” he inflicted mayhem to the max at the University of Georgia, particularly in his attacks on College of Education Dean Walter Cocking. Cocking’s ties to the philanthropic Rosenwald Fund, which in Talmadge’s mind translated into “Jew money for n—-rs,” rendered him far too liberal for the governor’s taste. When Talmadge’s rampage was done, a number of faculty and administrators had been ousted, as had several members of the Board of Regents who were deemed less than totally comfortable with Talmadge’s dictatorial tactics. Not surprisingly, an official finding of “gross political interference” in the affairs of the state’s white public universities led to their immediate loss of accreditation and, later, to Talmadge’s failure to win re-election in 1942.

Because gubernatorial terms had been extended to four years, “Ol’ Gene” had to wait it out until 1946 to claim the office of governor for a fourth time, but claim it he did, in a campaign that left no doubt about the depth and ruthlessness of his racism. The Supreme Court had recently struck down the Democratic primary as a whites-only affair, meaning that in 1946, Georgia blacks would have their first chance since Reconstruction to vote in significant numbers in a race that actually mattered.

There had been little mystery about the racial attitudes of a man who freely admitted to horse-whipping a black man until he yelled “Sweet Jesus!” Racial tensions were ratcheted up with every Talmadge warning of a “nigra takeover” in the 1946 campaign, leading him to sanctimoniously counsel “wise Negroes” to “stay away from white folks’ ballot boxes” on Election Day. This they largely did in his home county of Telfair, and even more so in Schley County, where the state representative simply positioned himself at the polling place with his shotgun after vowing to immediately dispatch any black person with the temerity to show up to vote. In the end, though relative racial moderate James V. Carmichael claimed a majority of the popular vote, Talmadge amassed enough county unit votes to win his fourth term as governor, albeit one he would never serve.

The most tragic immediate consequence of the racially charged campaign came roughly a week after the primary, when two black couples were gunned down in broad daylight by a mob of whites at Moore’s Ford in Walton County. Several other reports of violence against blacks surfaced over the next few weeks—Talmadge’s victory having signaled that, as one journalist put it, it was now open season on blacks, “and every pinheaded Georgia cracker and bigoted Ku Kluxer figured he had a license.”

Meanwhile, Talmadge’s health disintegrated rapidly, and, suffering from complications of cirrhosis of the liver, he died without being sworn in as governor a few days before Christmas in 1946. His unwitting bequest to the state was the fierce and altogether ludicrous struggle to claim his office that led to the notorious “three governors” controversy, which revealed Georgia politics at its most venal, benighted and self-destructive worst, and thus offered a fitting conclusion to a sad and sorry chapter in the state’s history.

Beyond striking a decidedly foreboding tone for the gateway to one of the nation’s most inviting cities, any bridge that continues to celebrate so toxic a historical legacy as that of Eugene Talmadge is, in itself, an obstacle to overcoming that legacy.