The Past Isn’t Dead, But Some Versions Of It Are Pretty Sick 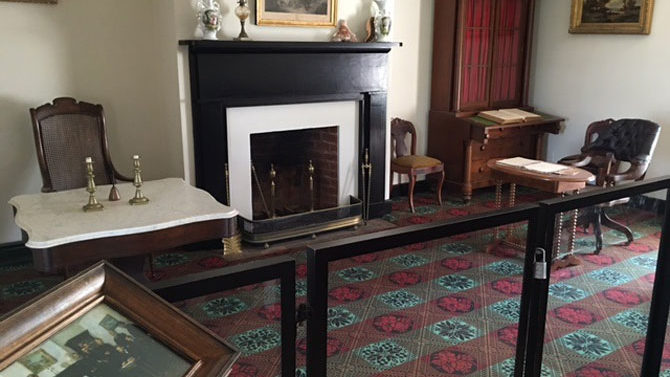 It’s not as if the Ol’ Bloviator and his wonderful bride needed any further confirmation of Gavin Stevens’ famous declaration in Requiem for A Nun that the past is neither “dead” nor “even past,” but if we had, we definitely got it a few weeks back after we made the twisty trek from Lexington, VA, where the O.B. was teaching at that point, across the mountains to Appomattox National Historical Park.

The exhibits and artifacts were impressive, but our real destination was the McLean House, where the actual surrender took place. (There is a misconception that this happened in the courthouse because at the time this tiny hamlet was known as “Appomattox Courthouse.”) This had come to pass because poor Wilmer McLean happened to be the first person Lee’s aide, Col. Charles Marshall, encountered upon arrival at Appomattox Courthouse. When they pressed McLean about a suitable site for the surrender, he first offered a dusty, unfurnished building nearby that struck Marshall as not quite up to snuff for one of the most critical meetings in the nation’s history. McLean then offered an on-the-spot, Medallion-miles-be-damned upgrade, the parlor of his home.

Lest ol’ Wilmer be seen as churlish and inhospitable, it is important to note that he had pretty good reason for reluctance in handing over his home to the Confederates, having done the same with his previous residence, near Manassas, as a hospital and command post for General P.G.T. Beauregard during the first major battle of the war at Bull Run No. 1. His house had taken a cannonball to the chimney during the fight, and, after seeing it and his and his wife’s 1,200-acre plantation ravaged by war, he removed himself and his family some 120 miles to the south to the near-obscurity of Appomattox Court House, where he thought surely the war would not find them again. (Even today, any soldiers approaching the town from the west, might deem this a fair assumption on Wilmer’s part.) Yet, McLean seemed destined to have, as he was later to say, “the war [begin] in my front yard and [end] in my parlor.”

After the proceedings were concluded, Wilmer’s coerced hospitality would be rewarded with a locust-like stripping of his furnishings and even pieces of his house itself by Yankee souvenir-seekers who took most anything not nailed down and tore out a lot that was, especially in the “surrender room,” where Lee, accompanied by a single aide, sat at the desk on the left and Grant, surrounded by several members his staff, sat at the one on the right.

All in all, at 20 feet by 16 feet, it seemed like a mighty tight space for such a momentous event. The carefully reconstructed courthouse, dwellings, store, etc. definitely took us back and underscored what a tiny, out-of-the-way place the village of Appomattox Courthouse had been in April 1865.

It had been a satisfying experience and a sobering one, though perhaps not nearly so much as the one that awaited us. As we approached Appomattox, we had at one point found ourselves in the midst of what seemed like a caravan of trucks and SUVs, all of them with humongous Confederate battle flags flapping all over the place. The O.B. remarked at the time that he hoped to hell they weren’t headed to the same place we were, but they all whipped into a truck stop, and we headed on. We noticed as we neared the park that there were four state-trooper cars with flashing bubble-gum machines along the road and several park rangers, as if they were awaiting either a Donald Trump rally or Bonnie and Clyde in a stolen getaway car. All of this had told the O.B. somehow that we had not seen the last of that ostentatious band of flaggers, and sure enough, upon exiting, as we came upon a little Confederate cemetery on the edge of the park, there they were, apparently holding some sort of rally. 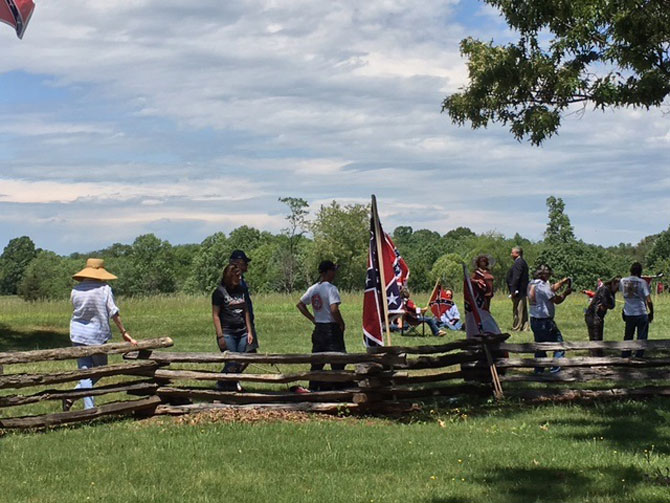 As the O.B. stood in the parking lot a hundred feet or so from the proceedings trying to get the widest-angle image an iPhone can deliver, he noticed the approach of a right good-sized fellow whose grim countenance and purposeful stride said that he was less than thrilled by the O.B.’s attempt to capture the event for posterity. Thereupon ensued the following exchange.

O.B.: “Not really. Just been over at the park and wanted to see what was up. This is public property, isn’t it?”

Instead of replying, he turned away, doubtless after concluding that it would not say a whole lot for his version of Southern honor if he curb-stomped a rickety old geezer six inches shorter and 30 years older than he, especially in plain sight of a couple of park policemen. The incident might have seemed less striking had we not just been hammered with the park service’s emphasis on Appomattox as the place where, thanks largely to two reasonable and heroic men, America came together again. Suffice it to say, you certainly could not prove any such thing by the crowd at the cemetery, who gave little indication they were aware of what actually transpired about a half-mile to the east in Wilmer McLean’s parlor.

The O.B. regrets not pressing on another 100 miles or so east of Appomattox to take in his family’s first North American “home place” near Petersburg, where Ambrose Cobbs, late of Willesborough, in the South East of England, claimed his 350-acre headright grant in 1639. (Each new colonist was granted 50 acres of land for every “head” he brought, including his. Ambrose arrived with his wife, Ann, and children Robert and Margaret, along with three men indentured to Ambrose in exchange for his paying their passage. Hence Ambrose was credited for seven heads at 50 acres each—350 acres.)

Fuming about this missed opportunity to get better in touch with his family’s past did spark the O.B.’s curiosity about how his ancestors fared in their early years in Virginia. Turns out that they did pretty well. Ambrose’s son, Robert, and grandson Ambrose would both serve as vestrymen of Bruton Parish Church in Williamsburg, and Robert was appointed sheriff of York County in 1682. According to historian Christine Eisel, however, Robert’s rapid social and political ascent did spark some jealousy:

“In October, 1658, Elizabeth Frith Woods, along with Johanna Poynter and Elianor Cooper, plotted to post a libelous document on the Marston parish church door… The three women maligned [vestrymen] Thomas Bromfield, Robert Cobbs (by implication) and their wives by accusing them of making mirkens. Mirken was a slang term used to describe a ‘pubic wig’ for women. The device was most often associated with prostitutes and sexually promiscuous women of low standing. A mirken was designed to hide the deformities that could occur from mercury treatment for syphilis and/or gonorrhea, or to temporarily replace pubic hair that was shaved due to body lice. The women did not accuse anyone of wearing mirkens; they accused them of making mirkens, an accusation that carried layers of meaning. They did not imply that the Bromfields and Cobbses engaged in loose sexual activity themselves; rather, they implied that the Bromfields and Cobbses associated with such people, who were beneath the standing of proper vestrymen and their wives. The women also implied that the Bromfields and Cobbses insulted their neighbors by sending mirkens to them. Further, Woods and her conspirators implied that the Bromfields and Cobbses were covering up some improper and ugly activity, just as a mirken was designed to cover or disguise a deformity.”

According to Eisel, the women were eventually dismissed as vicious gossips, and two of their husbands were fined a whopping 10,000 pounds of tobacco for their wives’ efforts to defame my seven-times great-grandpa Bobby, but from the looks of it, things got hairy for a while.