What’ll It Be, Sir: Beer or Prune Juice?

The Ol’ Bloviator is long past looking forward to his birthdays, and in fact, he is well along into dreading them. Not the least of the reasons for this is that in recent years, anniversaries of his arrival in anno domini MCMLXVII have been prefaced by developments seemingly devised specifically to warn him emphatically that his day of departure from this mortal coil might be coming any day now, and certainly sooner rather than later. In 2010, for example, while he was running along without a care in the world, he was not-so-subtly reminded of his mortality by the left front fender and tire (CRUNCH!) of a hit-and-run driver. Last year, five days before he was to close out his sixty-fifth year on the planet, he tripped while running and received an early birthday present in the form of a crack in his outer hip bone, thereby achieving the symmetry of having suffered fractures on both lower limbs which, in turn, serve as bookends to his totally devastated discs in the L4-L5 vicinity.

Yet, resolutely oblivious to these oversized flashing neon signs that he should be rocking on the porch rather than pounding the pavement, the O.B. persists. The upshot is that he has become a battered and bloodied affirmation of the stereotypical old man who gives evidence of being a runner primarily through his inability to walk normally. If you think the O.B. is exaggerating in the least here, just watch the airport wheelchair guys who automatically assume he is their passenger and descend upon him as soon as he limps/shuffles off the plane. Granted, this is now a regular occurrence, but lest his birthday week pass without further evidence of his advanced decrepitude, this one began with news of the passing of the loveliest damsel ever to grace the magical Mouseketeer kingdom, Annette Funicello. While her death doubtless came as a welcome end to a protracted ordeal for her friends and family, it robbed a huge slice of the   males of the O.B.’s generation of the primary object of the first stirrings of their pre-pubescent sexuality. Truth be told, the first thought about Annette that entered the O.B.’s head was that although she was a girl, she really seemed nice. Suffice it to say, stronger feelings (that he does not care to elaborate on here or elsewhere) soon supplanted this one. The O.B.’s sadness at Annette’s death was only compounded by the discovery that she was merely four years his senior. Who knows? Maybe he could have a shot with her after all.

Then, a couple of nights later, still bummed out over losing Annette and totally blitzed after a day of absolutely mind-numbing research in the manuscripts library of a prestigious New England university, the O.B. staggered into a brew-pub/pizza joint, where a pint or two later, he ordered himself a big ol’ pie. Unfortunately, just as he prepared to ravage it with all the gusto of a man who hadn’t eaten since breakfast, he noted the designation assigned him on his pizza tab: 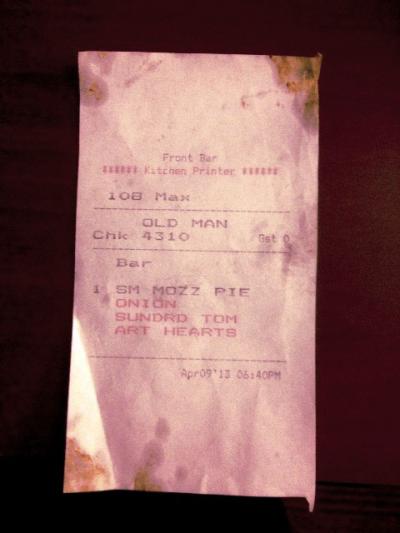 (Sorry about the tomato sauce fingerprints. When it comes to pizza, the O.B. is a less than fastidious ravager.)

When the O.B., making great pretense of jocularity, called the barkeep on his brazen display of ageism, the young man responded with an apology that was itself a little more genuine in its jocularity than the O.B. might have preferred, especially, coupled as it was with the familiar millennial shrug, which so far as anyone can tell, seems to translate loosely into “Whatever.” (In this barkeep’s case, the shrug also translated into a tip of $3 Confederate. Turn the town upside down on that, Buddy Boy!)

In the end, however, since the shaggy ol’ prof was plenty old enough to be this guy’s grandpa and that of practically everyone else in the establishment, there was really little option other than to be amused by the whole business, especially when it called to mind numerous male members of the O.B.’s non-academic age cohort who persist in fancying themselves viable candidates for lusty frolics with playful coeds.  By way of salving his own wounded ego just a bit, the O.B. has wondered whether the barkeep’s less than respectful designation of him might be related to his telling the lad that the first pint of the house brew put before him was totally flat. If such ridicule is the price of maintaining one’s standards, then so be it, for at the O.B.’s advanced age, no maxim resonates more powerfully with him right now than “Life’s too short to drink bad beer.”