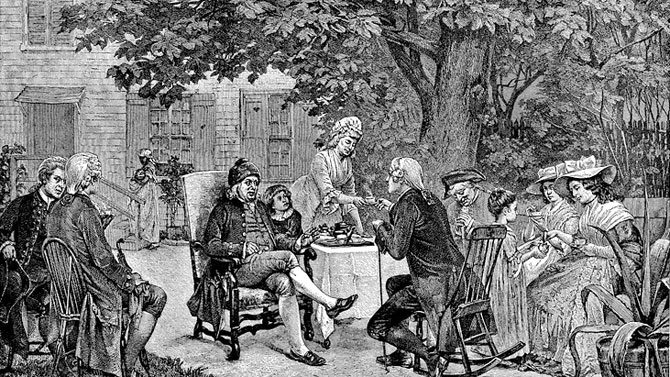 In the 43 years that the Ol’ Bloviator has taught United States history in both state universities and the public schools, he has done his dead-level best to resist the temptation to turn his lectern into a â€œbully pulpitâ€ for proselytizing his own political gospel according to James. Not surprisingly, the OB also gets his back up when others, with no particular preparation in the field but a truckload of ideological axes to grind, attempt to prescribe both the content of historical curricula and the lessons that are to be drawn from them. A textbook example of such an effort to control the textbooks is Georgia Senate Bill 426, introduced by Sen. William Ligon (R., Brunswick) and others and currently under subcommittee review.

â€œThe Teach Freedom Actâ€ seeks to â€œmodify requirements for instructionâ€ in U.S. history and other related social studies disciplines. In keeping with the spirit of a similar initiative launched with Tea Party backing in Tennessee, this legislation is premised on the belief that â€œa positive understanding of American history and government is essential to good citizenship.â€ The problem from the get-go here is that the bill seeks a positive understanding rather than an informed one. Hence, it would require teachers to impart â€œan understanding of the mandate of the British government that required slavery in the colonies and the actions of various Founders who always opposed slavery, as well as early civic and religious movements to end slavery, and the self-correcting constitutional language the Founders included to allow the nation to end the institution of slaveryâ€¦ â€

This item is particularly distressing because it suggests first of all that the sponsors of this bill are themselves poorly informed of the history of their own state. If there was a British â€œmandateâ€ requiring slavery in the colonies, how was it that in 1735 the House of Commons passed a resolution affirming the initial decision of Georgiaâ€™s Trustees to ban slavery in the colony? Likewise, the â€œself-correcting constitutional languageâ€ supposedly drafted by the Founders â€œto allow the nation to end the institution of slaveryâ€ actually applied not to slavery itself, but to â€œthe Migration or Importation of such Persons as any of the States now existing shall think proper to admit,â€ i.e., the international slave trade, and even then it prevented Congress from taking action against that trade for the next 20 years. President Thomas Jefferson supported the act of Congress that forbade further international commerce in human property after 1808, but for all his public display of angst over the issue, like several of the other founding fathers who are described in SB 426 as â€œalways opposed to slavery,â€ he proved extremely reluctant to free more than a few of his own bondsmen.

Ironically, in combination with the rising demand for labor sparked by the introduction of the cotton gin in 1793, the ban on further importation of Africans actually helped to boost slave prices, thereby proving quite the financial boon for Jefferson, James Madison, James Monroe and other slave-holding presidents and prominent statesmen. The fact that these men held slaves does not mean that they deserve no credit for their various contributions to our infant republic, but covering up that fact simply clouds our understanding of how slavery managed to hang around so long in a nation ostensibly dedicated to freedom and equality.

The proposed billâ€™s off-kilter references to slavery barely scratch the surface in revealing its manifold inaccuracies and unsubstantiated generalizations about the often complex and by no means consistently orthodox attitudes of our early leaders toward religion, â€œfree enterpriseâ€ and the â€œdemocratic process.â€ There is also reason for concern in its rigidly prescribed, severely front-loaded version of American history, which leans so heavily on the first six presidential administrations that only two of the documents it stipulates for inclusion in the accepted curriculum appear to bear directly on events that transpired after 1832. There is also the provision that â€œinstruction, activities, and curricula in United States history, particularly in the high school curriculum, shall be taught chronologicallyâ€¦ â€ History is more than a mere succession of events. It typically happens across broad expanses of time and not necessarily in linear fashion. Students may like the idea of simply memorizing the main events of each year from 1776 to 1787, but such an approach promises little in the way of a comprehensive understanding of developments such as â€œgrowing dissatisfaction with the Articles of Confederation,â€ a mandated point of emphasis in SB 426.

The framers came up with a pretty remarkable document in 1787, but surely not even their most ardent admirers could credibly contend that either they or the words they put to page actually anticipated the many roadblocks and circuitous detours that our nation would encounter on its way to where we are now, any more than the most prescient currently among us (Are you listening, Newt?) have the faintest clue about what things will be like in the year 2237. Regardless of whether it best serves the agenda of Glenn Beck or Jesse Jackson, to institutionalize such a one-dimensional and misinformed narrative of the past based on a heavily ideological perspective on the present is to encumber future generations with a version of history that they may hardly recognize, much less find instructive.

(An earlier version of this harangue ran on Maureen Downeyâ€™s excellent blog at the AJC. If you go over there, donâ€™t miss the comments. They include such gems as: â€œWell, at least Cobb had the decency to name his blog appropriatelyâ€”Cobbloviate indeed. To say that Cobb is a bit ‘full of himself’ is an understatement. Holy cow.”)