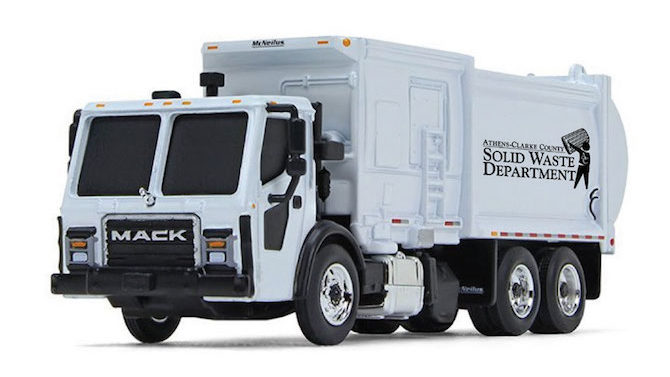 Commissioners get constant complaints about noisy trash haulers, whose trucks sometimes spill trash in addition to picking it up. Already, ACC has limited the number of residential haulers to five companies in order to limit the number of trucks rumbling through neighborhoods, but that hasn’t stopped the complaints. A work session this week will consider other possibilities, including a zone system that would allow only one hauler to serve each area outside the former city limits, which are served by the government’s own trucks. The zone approach was rejected several years ago, but as complaints continue, commissioners may be more friendly to it.

Haulers might bid on each zone, since some neighborhoods are denser than others, or the county’s own trash service could expand to serve the entire county, eliminating private haulers entirely.

County regs already allow for another possibility, and commissioners used it last week for the first time: If a neighborhood served by private haulers wishes to be served instead by the county’s trucks, either 60 homeowners or a commissioner can request the change. Last week, Commissioner Russell Edwards made that request for Riverbend Parkway, where homeowners say trucks of four haulers making round trips along the dead-end street create noise and safety risks. County staffers will study impacts of such a change, and there will be a public hearing before a final commission vote. If accepted, “it’s going to add cost” for the county, Manager Blaine Williams said, but residents served by county trucks must pay a monthly trash fee.

Several commissioners were enthusiastic as they approved corridor studies (costing $400,000) for Lexington Road and Atlanta Highway. The Lexington plans have been a “long time coming,” Herod said, with input from hundreds of citizens, and significant construction by GDOT will begin next year at the Loop, where traffic backs up regularly. Neither corridor has continuous sidewalks; the studies recommend building sidewalks along the south side of Atlanta Highway and along Mitchell Bridge Road, and along the south side of Lexington Road to Southeast Clarke Park. They suggest adding a bus transfer station inside the Loop and “premium” bus service on both corridors, along with automated bus preference at stoplights; added landscaping, including a center median on Lexington Road; and improved crosswalks. New “pocket” parks and connective multi-use paths are also proposed, but $4 million from the transportation sales tax earmarked for each corridor won’t fund all the studies’ proposals.

Should house parties require event permits from the county? Maybe so, Commissioner Jerry NeSmith told fellow commissioners, given a bed-and-breakfast rental offered as a “party house” in a residential Athens neighborhood. “It has to do with an irresponsible owner who’s advertising his rental as a party house, which he does not occupy. It has a swimming pool and an outdoor bar and a hot tub… Apparently, there’s some activity there that requires neighbors to close their blinds and not get sleep,” he said. Requiring an event permit, NeSmith said, would simplify enforcement. ACC doesn’t regulate short-term rentals like Airbnb, but laws regarding parking and noise are already on the books.