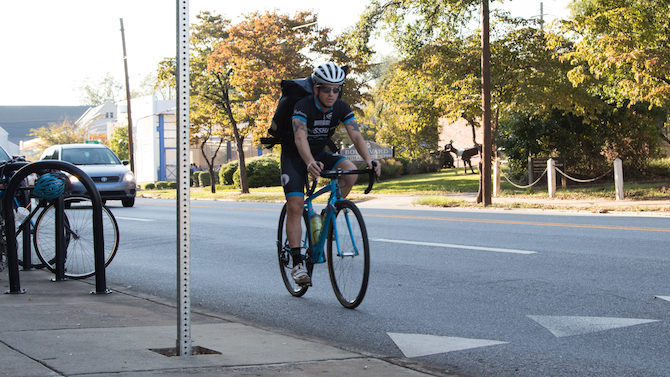 A draft “network plan” for future sidewalks and bikeways, resulting from months of work by a citizens’ committee and hired consultants, will soon be up for public comment.

Consultants with Toole Design Group told commissioners at last week’s work session (video is available at athensclarkecounty.com or youtube.com/accgov) that hundreds of citizens filled out surveys, posted comments on an interactive map or were interviewed one-on-one in the past year. “If we saw people walking or bicycling, we talked to them,” Toole’s Ernie Boughman said.

The consultants also looked at earlier county corridor and transit studies and tried to assess demand for bike/ped connections with a view to increasing the numbers of people who will actually use such facilities, not just adding miles of bike lanes or sidewalks. Athens is blessed with “very passionate” advocates for bike/ped facilities, Boughman said, and while a fraction of bike riders are “fearless” or confident, most are “interested but concerned” about their safety.

The developing map will update the county’s existing bicycle master plan and provide some priorities for building both sidewalks and bike projects as funds are available. “We will end up with many more projects than there’s money for,” Boughman told commissioners.

The yearlong process of developing the route map was not difficult, citizens’ committee member Tony Eubanks told Flagpole. “We’ve all been on the same page.”

ACC’s “single-stream” (no need to sort) pickup and drop-off recycling options make recycling painless, and they benefit the county by extending the life of the Lexington Road landfill (currently expected to last another 60 years). But with more materials being recycled, prices have declined, and costs and income typically run neck-and-neck. “We’re getting more cardboard than we ever dreamt of, because of all the online shopping,” Janssen told commissioners.

She’d like to see increased fees to cover recycling and education programs, including composting, as well as landfill costs. (Nearly half of landfill fees and a 60-cents-a-month trash pickup surcharge already go to such programs, totaling over $900,000 a year.) Janssen proposed increasing the surcharge over time to $2.15 (and $15–$34/month for commercial and industrial customers).

Commissioners were supportive, but wary. “I got calls from people—you’d have thought I shot their cat” when the initial 60-cent fee was introduced, Commissioner Jared Bailey said. “There will be pushback.”

Commissioner Melissa Link suggested a surcharge on plastic bags: “What could we do to get that rolling?” Mayor Nancy Denson responded, “Have a different mayor.”

Commissioners also got a report from the county’s external financial auditor (high marks) and from a consultant hired to study pay scales for county employees. ACC is “struggling” to hire and keep police and some administrators, Russell Campbell of Management Advisory Group told the commission. ACC hasn’t given raises based on performance since the 2008 recession, and pay for employees of less than 10 years often lags the marketplace, he said. The study is ongoing, and Campbell didn’t estimate the cost of increasing wages or pay separation, but county manager Blaine Williams has said it could be “millions” annually.