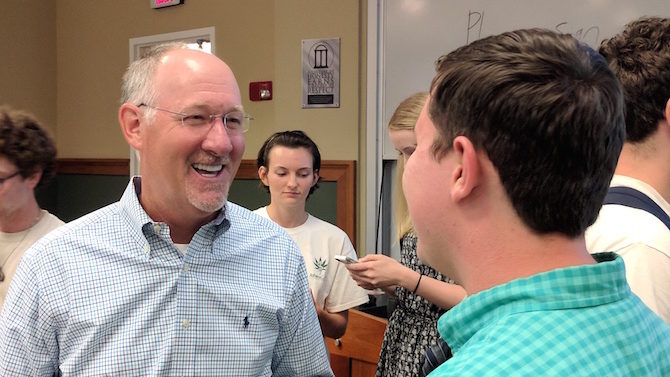 Georgia’s foremost advocate for medical cannabis, state Rep. Allen Peake (R-Macon), will continue his efforts to expand access to the drug during the legislature’s 2018 session, he told the UGA College Republicans last week.

Peak explained the current state of medical marijuana in Georgia. It all started with a passionate email in 2014 from the mother of Haleigh Cox, a four-year-old with Lennox Gastaut Syndrome who at the time was experiencing close to 100 seizures a day, reaching out asking him to fight for medical cannabis to help save her daughter’s life.

But there’s more to be done, Peake said. The Commission on Medical Cannabis voted against cultivation in Georgia, meaning THC oil must be imported from other states. That runs up against federal laws prohibiting such action. Legislation in 2016 would have created an in-state cultivation model, but despite passing the Georgia House, it never reached the Senate floor.

Peake outlined two pieces of legislation he introduced in the General Assembly: HB 645, which would allow licensing for medical cannabis cultivation, and House Resolution 36, which would place a referendum on the November 2018 ballot to authorize the state to regulate medical cannabis production.

In the meantime, Peake not only pushes legislation to increase availability, but helps individual patients. Once a month, he receives a shipment of bottles of cannabis oil that he gives away for free to registered patients. It’s a legal loophole that allows him to combat the short supply of oil.

Though he opposes recreational marijuana, “no one has ever died of a marijuana overdose,” Peake said, citing a recent study by UGA professor David Bradford showing an association between legal medical cannabis and reduced opiod abuse. “They may have gotten the munchies.”

In addition to the federal stance on marijuana, the pharmaceutical industry poses a threat to moving forward with medical cannabis. Federal restrictions may be eased, if the CARERS Act of 2017, legislation in Congress that looks to end federal interference on state laws and reschedule marijuana, passes, Peake said.

In Clarke County, advocacy groups like NORML and Athens CARE have pushed for changes in marijuana laws, including decriminalization. Although Mayor Nancy Denson says she personally supports legalizing marijuana for personal use, she has blocked efforts to reduce penalties on the local level, based on the city attorney’s opinion that doing so would violate state law.