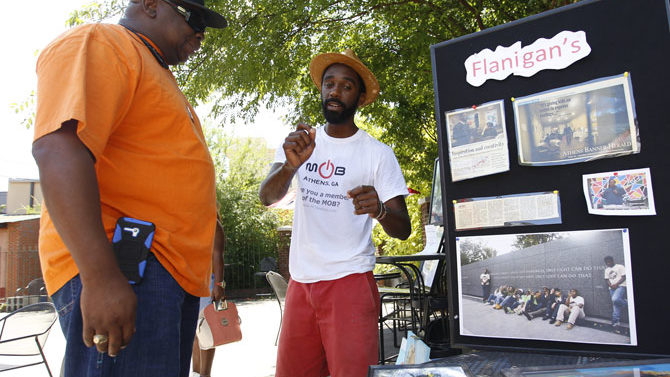 Rosewater and witch hazel floated through the air as Imara Dinkins, health educator and founder of Earth Palate, spritzed a sampling into the air, the smell crisp and the cool mist refreshing on one of the hottest Saturdays of the summer. She and six other vendors set up their booths in the shade of their tents at the first Black Market, which took place on the patio of Max on Aug. 6.

Mokah and Knowa Johnson, owners of United Group of Artists Live and leaders in the Athens Anti-Discrimination Movement, organized the market with artist Broderick Flanigan and others from the movement in order to “bring more diversity downtown” and support black businesses, Mokah Johnson said.

Black businesses are scattered on the Eastside and the west side of Athens, she said, and she hopes that the market will help bring them together to help them grow as a community. She explained that many black vendors go to Atlanta to sell their goods, because they can find a customer base there.

She aims to stimulate the black economy in Athens, to “uplift the urban community and also to educate people,” and though this is only the first event, she hopes to see it grow and says “the goal is to get off the patio.” The plan is to make the market a quarterly affair, though she was adamant that it would not compete with Hot Corner, but be more like an extension of that festival, carrying it throughout the year.

Profits from the market will be used to support the Johnson’s preteen dance troupe, the VIP Girls, and the Anti-Discrimination Movement, though she says “it’s not split 50-50, it’s [given to] what it’s needed for.” And they need all the support they can get, she emphasized. According to her, the Anti-Discrimination Movement is growing and on its way to becoming a nonprofit, at which time she says it will really become focused on social justice for everyone, the idea to “make it a community eye.”

“We would like for it to expand to all businesses,” she said, and she also wants a community board established that will help provide a system of checks and balances on the new ordinance. Because the ordinance is the first of its kind here, she said it’s important that it’s easy and clear to follow. The community board is important because “people will have a place to go and know what to do.”

The market, featuring not just vendors but performances by artists like Lingua Franca, LG, Squalle and Ziggy RoxXx, may not seem like it has much to do with the proposed ordinance, but Johnson said both missions have the same ideals in mind. “I want to break the monotony of the division between blacks and whites,” she said. And she’s finding every avenue she can to do this, whether it’s through the VIP Girls, the anti-discrimination ordinance or the Black Market, which she says “is a lot of work, but people need to know we’re here.”