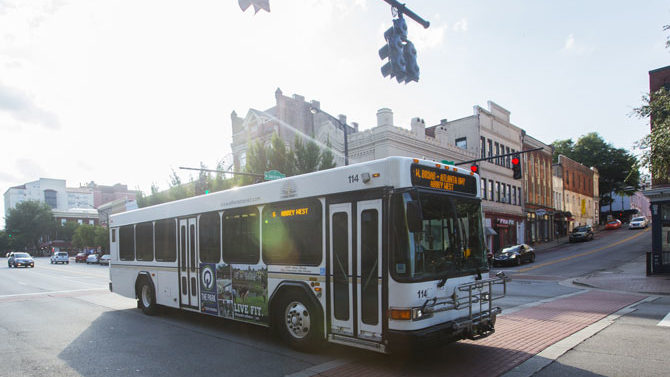 RS&H, a Jacksonville, FL-based consultancy, surveyed or interviewed several hundred citizens and bus riders, and analyzed location and census data to find likely riders in underserved areas. It specifically recommended a new route along Danielsville Road and Highway 29. Rachel Hatcher of RS&H presented an overview of the study to Athens-Clarke County commissioners last week—prompting Commissioner Jared Bailey to ask Transit Director Butch McDuffie why Bailey’s earlier suggestion of a route to that area had been dismissed. (McDuffie said he hadn’t hadn’t realized the potential demand there.)

A summary of the $185,000 study is on Athens Transit’s website. Survey respondents especially asked for more frequent service (an expensive item, requiring more drivers and buses), better on-time service, changes in routes and longer hours. Fares (at $1.75 for most adults, with free transfers) were not a big concern of bus riders, McDuffie said.

“There’s some history behind these routes,” McDuffie said, noting that the existing Barber/Chase route runs through low-density areas with a “very low propensity for transit ridership” and hasn’t been changed in 20 years. “Maybe some [official] had some constituents out there, and wanted to run a bus out there,” he said. Consultants suggest eliminating the portion of the route that loops along Vincent Drive, near Holland Park in the northern part of the city. Other loops, too, could be eliminated, with most routes becoming more like direct shuttles, although there are no immediate plans for any route changes.

Running buses to Caterpillar’s factory off Atlanta Highway is not justified by the density or likely ridership, but van service might be an option, McDuffie said. The Epps Bridge shopping centers are a much-desired destination, but would require Oconee county’s permission. “We’re not leaving this county unless somebody else helps pay for it,” McDuffie said. (Transit costs are split among riders, local taxpayers and federal subsidies.) In the past commissioners have resisted making it easier for Athens residents to spend their money in another county. And reaching outlying locations takes longer, so it would require more buses or transfer points to the existing system.

Five Points residents want better bus service and have the density to support it, but the Milledge bus takes too long, Hatcher told the commission. Eastside residents “are either happy, or they didn’t show up to talk to us,” McDuffie said. The study recommends improving bike and pedestrian access within a mile of all bus routes, so people can reach the bus stops.

“Many of the things we’ve recommended in the past, they’ve recommended again,” he said. Surveys said over half of riders take the bus even though they own a car, and they ride because of environmental, parking or traffic concerns. (Many Athens Transit riders are students or UGA personnel.) Already, real-time bus tracking is available via Google Transit, the Athens Transit website or a UGA mobile app that gets 10,000 hits a week.