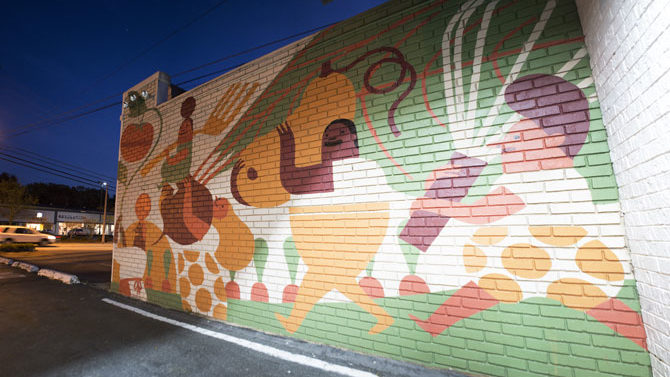 A survey of public opinion concerning art was conducted by the ACAC and then presented at the open house, revealing that many respondents look to cities such as Asheville, NC, Greenville, SC and Chattanooga, TN for inspiration. The types of art most desired are murals, sculptures and infrastructure such as bike racks. Survey-takers identified the bulldog statues, artist-designed bus shelters and murals as the most successful public art in Athens, with others mentioning Lou Kregel’s mums and Harold Rittenberry’s folk-art installations.

Todd Bressi, an art consultant visiting from Philadelphia, has been working with the ACAC since August to garner community input and help orchestrate new public art throughout Athens. “In order to keep the creative juices flowing, you have to let artists bring their own ideas, because they might have ideas about doing things in a way no one ever thought of. I think that if you’re doing public art that’s what you’re looking for. You’re looking for artists to do something fresh and innovative and unexpected,” Bressi said.

Bressi has helped to bring three renowned artists to visit Athens, to give their input and help connect with the community. The first two artists were Seitu Jones and Matthew Mazzotta. Here since Monday is Wing Young Huie, a Minneapolis photographer whose project is “chalk talks.” Huie’s vision is to bring people out of their bubble by photographing them with a chalkboard on which they write the answer to a personal question that a stranger asks them at Huie’s prompting.

Since his arrival in Athens Apr. 18, Huie said he’s interacted with about 70 people in Athens, from veterans in restaurants to students at Cedar Shoals High School and UGA to the Sparrow’s Nest, a local Christian ministry. “I was confronted by my own assumptions and biases,” Huie said, reflecting on the hundreds of people he’s photographed in his career, and he hopes his subjects have the same reaction.

His work is under consideration by ACAC, which is still figuring out how and where they want to display his project. UGA is considering turning it into a mural. You can see his “chalk talks” by searching the hashtag #athenspublicart on Instagram.

While public art has always been an important part of Athens culture, with the help of Bressi the ACAC has developed an Athens Public Art Master Plan. The plan incorporates some features of the Downtown Master Plan but encompasses a larger geographical area, the idea being to bring public art to all areas of Athens.

Athens-Clarke County Commissioner Diane Bell said she agrees strongly with the vision, believing that “letting each area have their own identity” is important for inclusion of all residents of Athens, adding that “I want us to do more to tie in with the university. We need more connectedness with all the interest groups.”

Currently nine ACAC projects are underway, paid for through SPLOST, the commission’s main source of funding. The ACAC has a national request out in order to find an artist to design an interactive feature for the upcoming World of Wonder playground replacement at Southeast Clarke Park. They also have money set aside to begin work on the Firefly Trail and Greenway extension around Dudley Park, which should see some revamping soon. A meeting in early May will decide the direction for these projects, according to Helen Kuykendall, an ACAC commissioner.

Potential SPLOST projects also include bus shelters and bike racks and a downtown cultural trail showcasing Athens’ history through art. “The Downtown Master Plan identifies some of the downtown areas as priority corridors for public art,” read the information posters presented at the open house. It also calls for improved links to downtown like walkways and greenways.

“Public art is an opportunity for businesses to sponsor, artists to produce their ideas, a way of making Athens prettier,” Bell said. “We have so much art that needs presenting.”