A Grocery Store, Student Apartments and Plans for George Dean’s 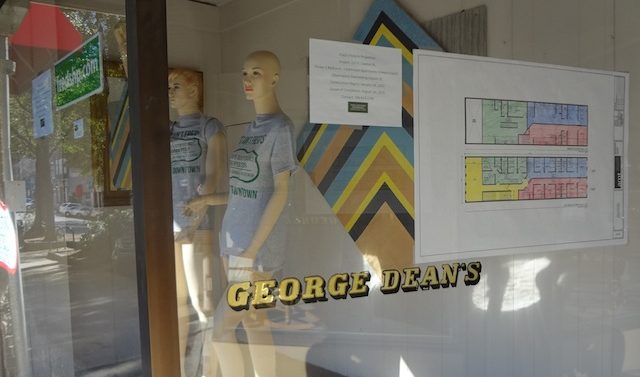 Chattanooga, TN, developer Hutton Co. is finalizing plans for a 40,930 square-foot grocery store with an adjacent multi-pump fuel center on a vacant lot at 3130 Atlanta Highway (near the intersection with Athens Town Boulevard). And while there is no word on the company behind the grocery store—Jeff Soble, senior development project manager with Hutton, cited a confidentiality agreement—he did say the company is in the process of closing on the property and they hope to begin construction by the summer.

Commissioner Jerry NeSmith, who attended the plans review session last Thursday, said he was happy to see the developers taking care to work with the site and its unique topography—it’s hilly, densely wooded in areas and wet in others. And, he added, it’s good to see some development happening along Atlanta Highway.

What kind of grocery store could it be? The proposed store is a stone’s throw from the grocery-enhanced Target, as well as Ingles, Aldi and Publix. The Alps Road Kroger and Fresh Market are two miles away, while the only Clarke County location of Walmart is on Athens’ east side. Although it’s unconfirmed, here’s a hint: Walmart is in the midst of opening “neighborhood markets” across the country, which are specifically grocery stores up to around 40,000 square feet. More than two dozen of these stores have opened so far this year.

In other development news, Athens-based developer Landmark Properties spent the past week tearing down buildings and ruins on the Armstrong & Dobbs property in preparation to start construction on a massive mixed-use student apartment complex at the corner of East Broad and Oconee streets, a similar but Walmart-less successor to the failed Selig Enterprises project that caused so much sturm und drang a couple of years ago.

The menswear store George Dean’s, a downtown institution, closed last month after 50 years in business, as owner Wayne Dean, George’s son, is retiring. Fred Moorman, in his ongoing quest to have Athens renamed “Fredville,” is renovating apartments on the building’s second floor and plans to add a third floor of apartments, as well. The ground floor will be leased to Zaxby’s.