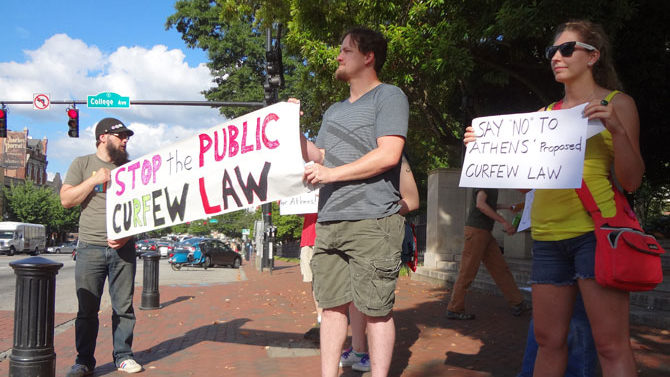 The controversial Occupy ordinance—also known as the public curfew law—is on its last legs after the Athens-Clarke Commission’s Legislative Review Committee voted June 18 to recommend that the full commission not pass it.

As they have in months past, commissioners valiantly struggled to find a reason to pass the law, which would limit access to the City Hall, courthouse and Dougherty Street government building grounds during certain hours, in response to Occupy Athens camping outside City Hall for several days last year.

Commissioner Doug Lowry quizzed Police Chief Jack Lumpkin and ACC Attorney Bill Berryman on what could be done to stop people from lurking around the landfill or the water treatment plant at night. They could be charged with trespassing or criminal damage to property.

Meanwhile, about 20 protestors stood around the room holding signs (public comment is not allowed at committee meetings). Occupier Jesse Houle wrote on a whiteboard: “Sounds like we already have laws for anything we need them for.”

Lowry also envisioned a scenario in which people camped out at fire stations, blocking the trucks. Lumpkin said the fire chief could have them removed, and they could be charged with trespassing or interfering with a government function.

Berryman wasn’t so sure. “If somebody wanted to set up a tent on the Five Points [station] grassy area, I’m not sure the chief, the fire chief, could legitimately say that’s interfering with a government function.”

But the proposed law doesn’t deal with fire stations or landfills. It would restrict access to City Hall, the courthouse and the planning department grounds. Lowry and commissioners Allison Wright and George Maxwell said the public should be able to see the veterans’ monument, the Spirit of Athens statue or the double-barreled cannon anytime they want.

“Those are symbols that I think people should have access to at all times,” Lowry said.

Maxwell and Commissioner Kelly Girtz talked about their protesting experiences. “I have been one of those who demonstrated for equal rights back in the day,” Maxwell, a former civil rights activist, said.

People should be able to demonstrate and promote their ideas, Girtz said, but not in a way that impedes other citizens or damages public property.

There may be a need for a public curfew law in theory, but in practice? Not really, Girtz said. Wright decided “this doesn’t address my concerns.”

And Lowry made one. Wright seconded it, and it passed 4-0. The recommendation makes it unlikely that the 10-member full commission would pass the law when it comes up for a vote, probably in August, dealing a political blow to Mayor Nancy Denson, who had assigned it to the LRC.

Downtown Plan: People for a Better Athens asked downtown master plan author Jack Crowley to present it to the group last week. It was mostly stuff we’ve heard before, but Crowley dropped a few interesting tidbits about the plan, which he hopes to wrap up in the coming weeks.

• Crowley predicts an astonishing 10 million boardings a year on a passenger train he’s proposing for the railroad running through the Multimodal Center and East Campus. For comparison, Athens Transit carries a little under two million annual riders.

• ACC can lease city-owned land to developers if they promise to use it for artists’ studios, affordable housing or something else the community wants, that the market won’t provide.

• Firefly Trail is “the single most stunning opportunity” for downtown. (Please see references to the Selig development elsewhere in this issue.)

• Speaking of Selig, its plans call for demolishing the Jittery Joe’s Roasting Co.’s old metal warehouse. But Crowley wants to move it across the street, where he wants to convert a stormwater pond in front of the Multimodal Center into a park.

• For $10 million, we could publicly finance a 2,500-seat amphitheater, managed and programmed by the Classic Center. Sports more your thing? How about a baseball stadium and a minor league team at Lay Park?

Need for Speed: Should drivers set their own speed limits? In a sense, they do, according to ACC traffic engineer Steve Decker.

To be enforced by radar, local speed limits must be approved by the state, and they must be set no higher than 85 percent of the traffic is already moving.  “Typically, 85 percent of the drivers drive to the conditions of the roadway,” Decker told Flagpole.

After making some speed checks, ACC is proposing to lower speed limits on Whitehall Road and on Atlanta Highway near Caterpillar. Drivers on Whitehall “are actually doing 40” rather than the posted 50 miles per hour, Decker said, so that will be the new speed limit.

Decker thinks car crashes are relatively few in Athens, compared to other places he’s worked, perhaps because of good policing here.  And those that do happen aren’t usually about speed, he said:  “Most of our crashes have to do with people on a cell phone.” [John Huie]

Roundabouts: Americans aren’t used to roundabouts—traffic circles that often handle traffic more efficiently than stoplights—but they are widely used in other countries, and the Georgia Department of Transportation now encourages their use.

Athens’ first roundabout will be built at the intersection of Tallassee and Whitehead roads. At a recent public hearing, “approximately half were for and half were against” building a roundabout instead of a stoplight, said ACC Traffic Engineering Administrator Jerry Oberholtzer. A second roundabout is planned at the far end of Milledge Avenue at Whitehall Road but may not be built until increased traffic counts justify it, perhaps around 2020. In the meantime, that intersection will be graded to improve sight lines.

Oberholtzer thinks drivers will get used to roundabouts, because, “If you [design] the first one right, then people understand it.” At least a dozen modern roundabouts (as opposed to courthouse squares, which operate similarly) already exist in Georgia, according to GDOT. [JH]