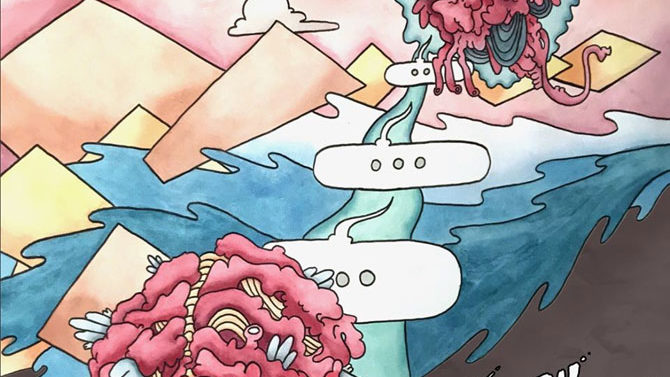 (Independent Release) Kudzu Samurai, a psychedelic six-piece based in Athens, released their self-titled album at the end of March. The prog rock band first formed in 2017, and is influenced by music from Palm, Mild High Club, and King Gizzard and the Lizard Wizard, though the members explore a diverse array of genres within their own work. Kudzu’s first full-length features four songs, starting with “Dream Machine,” a hazy, lo-fi track that steadily slides on a nonlinear plane of fluid time signatures and layers of craggy reverb. This cosmic orientation overflows into “Politico One,” introducing elements of surf punk and smokey bass flavors that darken the melody’s cyclical descent. Flute and other wind instruments highlight notes of bossa nova in this song, as well as “Boss Battle,” which pairs cacophonous jazz with abstract imagery while maintaining its consistent interstellar twang. “Letter” brings the record to a close, incorporating jangle pop into Kudzu’s trippy, tidal repertoire.