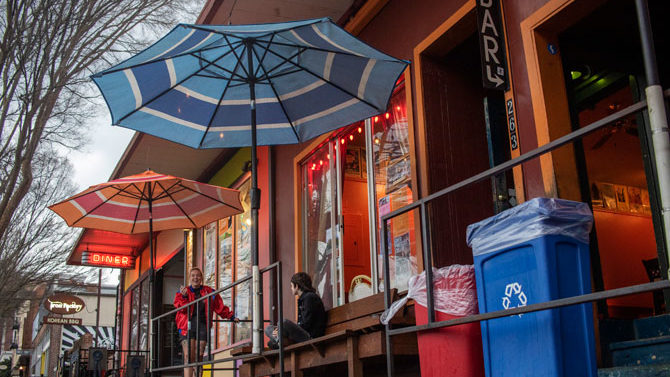 For two decades, Flicker Theatre and Bar has been a downtown destination for townies, students and visitors who love local music, underground cinema or simply grabbing drinks with friends. On Friday, Flicker celebrates its 20th anniversary with a blowout show. Featuring Elephant 6 favorites Elf Power and Scott Spillane, as well as local indie rock stalwarts Deep State and a late night DJ Mahogany dance party, the party will ensure that Flicker’s next 20 years start with a bang.

“Every Athens band I’ve been into has probably played there a couple times, so I’m just glad to be included in the 20th anniversary celebration,” says Elf Power frontman Andrew Rieger.

Flicker began at the turn of the century as an upstart film society. Organized by Angie Grass, and without a proper location, Flicker hosted classic movie showings at prominent local establishments, including the 40 Watt Club.

“The whole reason it’s called Flicker is that they used to show old movies,” says Rieger. “I used to be part of this thing called the Flicker Orchestra, where we would play live music to [accompany] silent movies.”

Eventually, Grass moved Flicker into its current location on West Washington Street. “Flicker has remained more or less the same since 2000,” says current co-owner Jeremy Long. “It’s still orange.” In the following years, Grass renovated the building to include a proper sound system and stage, and the venue became known as a hotspot for local live music. “I’m biased, but I do think it’s one of the best sounding rooms in town, acoustically,” says Long. “It’s a great natural space.”

In 2007, Long and co-worker Clint McElroy decided to purchase Flicker on a whim. “When we heard it was for sale, I just said, ‘Hey, we should buy Flicker,’ and within a few days, we owned the bar,” says Long, who says Grass sold the bar to them over “business-savvy types who were sniffing around,” because she knew they would keep the cinema theme alive.

Under Long’s management, Flicker has expanded from its roots in movies and music. “There isn’t a type of event you can think of that Flicker hasn’t hosted at some point,” he says. Over the years, Flicker has hosted BB gun tournaments, spooky campfire stories and a cowboy documentary featuring a guest appearance from actual modern cowboys.

“They rode them down Washington Street and tied them up out front like it was a Deadwood saloon or something. That was pretty magical… or nuts,” says Long, adding, “I look forward to hosting many more crazy events in the future, so that 20 years from now, I’ll be able to look back, shake my head and wonder how we got away with it all.”

Despite its more eccentric events, Flicker remains a favorite among local and touring musicians, as it provides an intimate and quirky performance space for bands of all sizes. “To me, it’s just really strange that it’s already been 20 years, so it’s hard to even fathom that it’s that old,” says Spillane, known for his work in Neutral Milk Hotel and The Gerbils. “It’s crazy.”

Elf Power’s Rieger expects the anniversary celebration to be special. “Because we’ve been around for so long, we kind of try to just play a couple shows in Athens a year to make it more special,” he says. “We’re in the middle of recording a bunch of new songs, so we may possibly play a couple new ones that we’re working on.” Spillane says bluntly of his set, “I guess if you’ve seen it before, you’d know what to expect. If not, I don’t know.”

Despite the changing face of downtown, Flicker’s future seems bright. Conceding the “struggle to keep an art scene and music scene alive when you’re competing with football money and real estate,” Spillane says Flicker is “sort of a meeting place for people to get together and say, ‘Hey I got a band going. You want to come sit in for a while?’ And you go over there, and it blows your mind.”

Flicker still hosts up to five events a week, and Long says he has no plans to stop. “In the future, I look forward to keeping Flicker growing and improving,” he says. “It’s a constant tightrope walk to improve and modernize while not losing what is organically beautiful about it.”