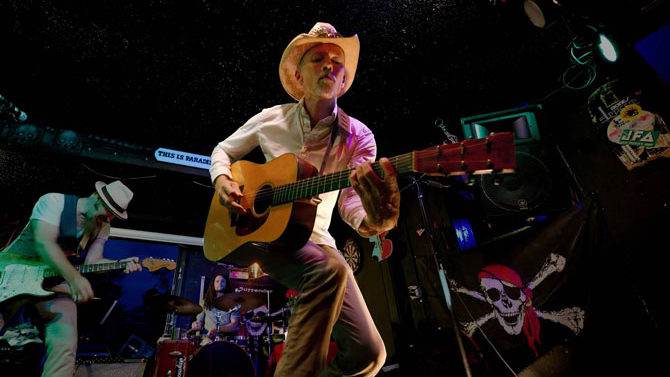 With fall weather setting in, it’s once again time for a longstanding Athens tradition. On Oct. 12, the North Georgia Folk Festival returns for a 35th year to Sandy Creek Park, bringing a diverse array of live music, art, kids activities and food.

“We really tried to curate [the music lineup] very carefully so we could get an interesting mix of things,” says festival director Tommy Jordan. “One of the things I’m really pleased about is that we got Caroline Aiken back to close the festival this year. She got rained out in 2015, and she was the headliner. She’s kind of a local favorite.”

The Skillet Lickers, a multi-generational band whose grandparents were among the first popular recording acts in the country genre during the 1920s and 30s, also headline this year’s festival. In addition to the scheduled acts, festivalgoers are encouraged to bring their own instruments and play under the covered jam tent.

According to organizers, the North Georgia Folk Festival is unlike other local festivals—or even other folk music festivals. “We focus on folk music in all its wide varieties. It’s not just Peter, Paul and Mary, which is a lot of people’s stereotypical folk music. We try to make it different,” says Jordan.

The festival further differentiates itself from other Athens events by purposefully scheduling during home football game days as cultural counter-programing. “Last year, we did it on a home game weekend kind of as a gamble… and we were right,” says Jordan. “Actually, our attendance was up [from the year before]. That’s what we’re doing again this year, and hopefully we’ll win again.” Upwards of 1,200 people attended in 2018, and organizers expect even more this year.

For families, the festival looks to create a lifelong experience. “There’s a lot of people who came here with their parents as kids who are now coming here as parents themselves and bringing their kids. That’s pretty awesome,” says Jordan.

Rebecca Sunshine, a local librarian who makes music specifically tailored to children, plays at 11 a.m. Following her band’s set, she will lead a parade of children from the stage to a tented area featuring crafts, face painting and an animal petting pen sponsored by Bear Hollow Zoo. The kids will be supervised by Montessori teachers until 3 p.m. “It’s a nice thing for families,” says Jordan. “The whole day is good for families.”

Sandy Creek Park provides a gorgeously unique setting for a festival, characterized by sprawling forests, winding trails and Lake Chapman. Lovers of water sports, disc golf and nature can expect to discover a new favorite park or simply take a break from the festival’s events.

Beyond the wooded, natural setting, the Folk Festival’s performers are always excited for the opportunity. “Athens has an unmatched musical community,” says Byrd, of the Pickup Cowboys. “Other cities in the U.S. have a strong music business, but Athens has community.”

Jordan concurs with Byrd’s assessment. “It’s an act of love to put this thing on each year,” he says, “and it turns out to be a party for your 1,000 closest friends.”