Screaming Females Map Out a Road to Indie Success 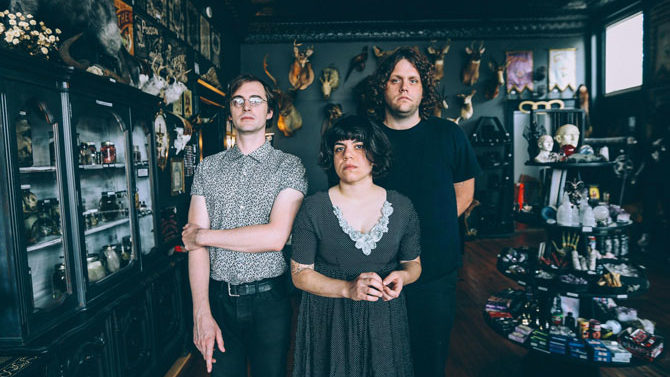 Punk, indie, alternative—call Screaming Females whatever you want. Just not “garage rock”—that’s one “thing that I never understand,” says drummer Jarrett Dougherty. Formed in New Brunswick, NJ, in 2005, the three-piece rock band defies easy classification. Yet it has developed a reputation as one of the hardest-working groups around, transcending buzz band status to become a touring circuit mainstay.

Since its formation nearly a decade and a half ago, the group has toured the country in several (equally loved) tour vans and played on bills with bands such as Garbage, Dinosaur Jr., Arctic Monkeys and Waxahatchee. Led by vocalist and guitarist Marissa Paternoster, the band, which also features bassist Mike Abbate, has released seven full-lengths. Paternoster’s guitar licks go from pounding with an iron fist to swiftly falling like glitter, and her soulful cries feel like a great awakening. It’s evident that the three members of the band have spent a substantial sum of time together, as the start of each track feels like clicking into gear, a fluid shift from park to drive.

On Oct. 18, the trio dropped Singles Too, a collection of non-album recordings, rarities, a remix and covers that vary from Patti Smith to Sheryl Crow. It functions as a road map of the past 15 years of music-making, through the playful and polished recordings of the band’s best B-sides. (To make it a true historical account, the album includes an actual road map, physically marking their journey as a band.)

Dougherty was the last to join the group. Paternoster and Abbate had a band together in high school named Surgery on TV before graduating and attending Rutgers University, where Dougherty was part of a club that released music made by Rutgers students. One of the group’s compilations featured songs submitted by various students. Dougherty had two favorite tracks on the CD, and he soon found out they were by the same person playing in two different bands: Paternoster.

He introduced himself to her and asked her to hang out, “not really thinking anything about it,” he says, “and pretty quickly, she asked me if I wanted to play drums with a project she was doing.” Thus was born Screaming Females.

Never meant to be taken literally, “the name came from a book of poetry in my house that I was living in at the time,” says Dougherty, “and it was a random occurrence, flipping open a page, pointing at it—that was it,” leaving the listener with a powerful yet ambiguous image.

Today, Screaming Females is maintaining a reputation as a band that’s done things its own way. Making it and staying relevant in indie music doesn’t happen by accident, and fellow musicians and fans alike have taken notice. “Pretty much everybody that we’ve ever toured with has reached out to us directly, which is really special,” Dougherty says.

Even megafans are not likely to recognize all of the tracks on Singles Too, much of it having been released on 7-inch singles, while others were exclusive digital tracks, and the rest found on various obscure playlists. All in one place now, these songs span from about 2007–2018, so one can hear the changes the band has made and see how it’s developed while maintaining its essential qualities. It’s “like a time capsule of a moment,” says Dougherty.

Explaining Screaming Females’ longevity, Dougherty says, “We still operate essentially the same way that we did when we started, and that means that we self-manage and we really work hard on everything that we do.”

In addition to the music, the band handles artwork, T-shirts, emails and phone calls as best they can, only bringing in middle men when they absolutely have to. As they see it, their inventory and music is theirs, so why should their decisions not be? And the way to build a reputable band, brand or anything else worthwhile is by forming real relationships with a like-minded community of people.

The advice that Dougherty gives to young musicians is to “learn all the different facets—even if you don’t do them all, don’t be scared to make mistakes, and then when you work with people in the future, make sure you work with people who you really want to build long-term relationships with.” People, that is, who “aren’t just about music, but are about life.”