WesdaRuler Has Something Important to Say 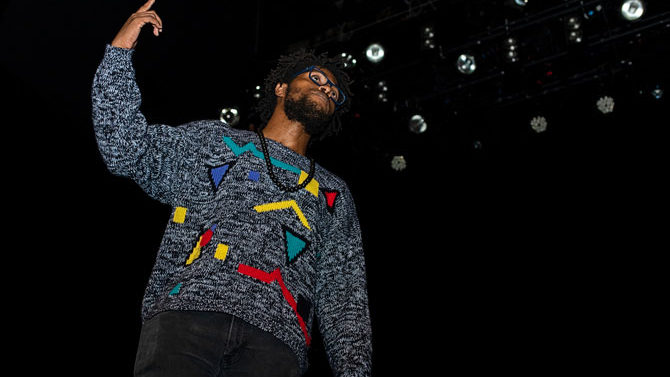 For years, Wes Johnson has been a go-to in the Athens hip-hop community for his signature laid-back beats. A pivotal figure in the Space Dungeon collective, his production work as WesdaRuler has served most notably as the foundation for emcee turned county commissioner Linqua Franqa’s raps. And while Johnson has stepped out from behind his laptop from time to time to share verses of his own—most notably on the 2017 EP 4da99—with a new full-length album at the ready, Athens is poised to discover that often, the supporting players have something important of their own to say.

Even a cursory listen to Ocean Drive, WesdaRuler’s debut long-player, gives the impression that the boom-bap impresario is wise beyond his years. Sure, he has two boys of his own, aged 6 and 3, so you know he’s relayed his fair share of fatherly advice. But the nuggets of knowledge encapsulated in songs like “Butterfly” and “GeturAssintheCar” are so clearly communicated that they comprise one of the strongest, most cohesive musical mission statements to come out of Athens in some time.

A large part of Johnson’s outlook—and by extension, Ocean Drive—has been shaped by his proximity to and experiences with mental health struggles. What started as a personal test to step out of the boom-bap box quickly turned personal.

“By that point, a lot of cats thought of me as the boom-bap guy—that was strictly my production style,” says Johnson. “So, I was just trying to do some different styles a little bit, still rooted in hip hop. But then, some personal stuff happened with my family, and with my mother in particular, and that kind of started to shape what was happening, just because I couldn’t help but be thinking about it.”

Johnson says several of the tracks on the album have been finished for about two years, but it took a while to get to a place where he felt comfortable putting them out into the world due to how close to home the subject matter was.

“It took some time. It took me a little bit to be willing to just talk about it, especially without getting super emotional,” he says. “You’ve got to put it out, and you’ve got to be able to perform it, and it took me a little time to get to a place where I could do that and not cancel the set,” he adds with a hearty laugh.

Ocean Drive’s second track, “Butterfly,” grapples with the range of challenges Johnson faced over the course of creating the album. His introductory refrain of, “Let’s take a ride through the mind/ One time, one time” floats over a sea-breeze synth pad before he launches into a series of raps about friends’ check-in calls, the performer’s unique challenge of providing listeners with a good time while he himself is having a tough one, and the difficulty of being away from his mother while she struggled with issues of her own.

As mental health is more openly talked about and grows progressively less stigmatized—especially within the world of hip hop, where artists like Kanye West and Kid Cudi opened up the conversation 10 years or so ago to a younger generation of listeners and artists—Johnson acknowledges that there’s still more to learn.

“[There’s] still progress to be made,” he says. “I feel like certain realms of it come up. I know a lot of people are willing to talk about depression or anxiety and things like that, but you don’t hear much talk about schizophrenia or the fact that we actually know very little about the human brain, period,” he adds. Johnson even brings up the fact that he takes his sons for physical check-ups, but mental health screenings aren’t yet commonplace, as an example of how society has yet to take a holistic view of health as seriously as it should.

With a manifesto designed to resonate with the masses, WesdaRuler is seizing his opportunity to make sure the conversation keeps moving forward. Above all, he wants listeners to know that they’re not alone, and there’s still happiness to be found.

“You can still find those good things that are goin’ on,” says Johnson. “At least, that’s the message I’m trying to portray. At the end of the day, you can still depend on family, depend on friends or just depend on yourself and go out and have a good time. And it’s OK to do that—even if you’re going through something.”