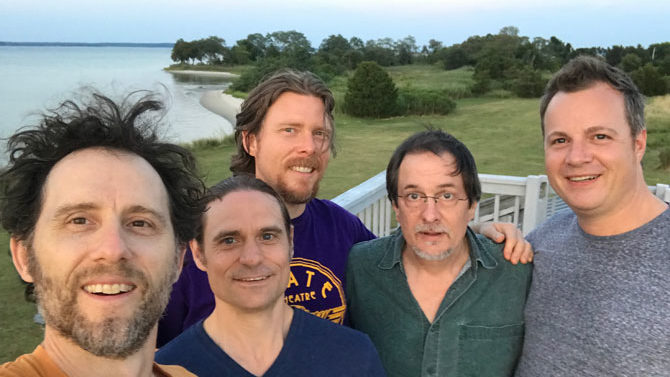 In the summer of 1999, five local musicians banded together under the name One More Saturday Night to play the music of the Grateful Dead. Now, 20 years later, the tribute band has played roughly 800 shows as Cosmic Charlie.

Growing up, many of Cosmic Charlie’s members were committed Deadheads who traveled around to see their favorite band. Yet, like most listeners, their tastes shifted over the years. Frontman Michael Wegner’s musical path was long and winding. After falling in love with the Dead in high school in the early 1980s, he became disillusioned with the group’s newfound massive popularity.

“Their audiences had doubled or tripled in size, and many of the newbies were there just because it was cool to be a Deadhead,” Wegner says. “They seemed more interested in tie-dyes and hacky-sacks than actually paying attention to the music.”

Wegner began to explore punk and power pop, joining a punk band called Coat of Arms that played with many noteworthy acts of the time, including the Pixies. But the Dead’s music kept calling.

“I came to terms with the fact that I loved the Grateful Dead and their musical philosophy, and realized that I could go on appreciating them without worrying about the ‘scene,’” says Wegner. “And I also stopped worrying about whether my punk [and] indie friends thought I was lame for liking the Dead.”

Wegner’s journey is mirrored by a recent increase in cachet for the iconic rock group, evidenced by a spike in younger, hipper bands who cite the Dead as a primary influence. Wegner says it can be compared to how fashion choices and styles popular in the ’80s and ’90s are coming back into vogue. But it’s also purely about the work, he says—the Grateful Dead’s music and performances are unlike any other. “It’s kind of a musical experience that you can’t get elsewhere,” he says.

Over the years, Cosmic Charlie has been joined by many guest musicians on stage—even members of the Grateful Dead, including keyboardists Vince Welnick and Tom Constanten. The list also includes members of RatDog—Dead guitarist Bob Weir’s band—as well as Disco Biscuits, Dark Star Orchestra, Deerhunter, Harvey Milk, Dubconscious, Perpetual Groove and others.

“Across the board, I’d say the people we played with that had direct connections to the Grateful Dead were also amazing musicians, and you can feel that when you’re playing with them,” Wegner says.

Cosmic Charlie recently returned from a 10-day tour of the East Coast, playing in clubs and venues for new and old fans alike. Reflecting on touring over the years, Wegner shares stories of wild experiences, including a venue catching fire while they were performing, a tree falling on their van, attempted robberies in parking lots and police accidentally showing up to their hotel room in the middle of the night.

The band has experienced a lot over the past 20 years, and its members are excited to celebrate it this weekend at the Georgia Theatre, where it all began. Saturday’s anniversary show will feature original and current Cosmic Charlie members, as well as an earlier acoustic set on the rooftop.

Wegner says he and the rest of the band are excited to continue sharing the music of the Grateful Dead with the town they love the most. “We appreciate Athens,” Wegner says. “Part of the reason this band is having its 20th anniversary is because Athens is such a great town.”

Dave Domizi (bass, vocals): I always enjoy playing the live standard double-shot of “Scarlet Begonias”/“Fire on the Mountain,” which offers a bright and exciting energy, allows the band to really stretch out on an improvisational level and always seems to connect with and bring joy to the crowd.

Nate Hale (drums): “The Other One” is my favorite Grateful Dead song to play live, because it has so much potential to go places that are unexpected. It has an up tempo, a great, swinging 6/8 time signature and a creepy minor menacing feel that I like.

John Miley (guitar, vocals): “Dark Star”—a song that delivers much in relation to what one contributes. This piece provides a wide harmonic field where improvised phrases often become instantly familiar. The song seems to contain its own compositional software.

Kane Stanley (drums): “Playing in the Band” has always been a favorite of mine to play live. With its 10/4 time signature courtesy of Mickey Hart, the music weaves between rock and jazz, and the middle jam section allows the band to explore new improvisational territory.

Michael Wegner (guitar, vocals): “Brokedown Palace.” Beautiful harmonies, compelling chord changes, themes of love, death, loneliness, nature… This song would put me in tears every time Jerry sang it. If we can convey even a fraction of that emotional content to our audience, I feel successful as a musician.

Walt Austin (keyboards, vocals): I’m drawn to the slower tunes, but “Bird Song” in particular has a certain hope and awe to it. The song is tailored to have space between the notes. There is even an amazing pause at the end of each chorus, before the verse comes in, where the music just hangs in the air.