Grand Vapids Plow Ahead With Eat the Shadow 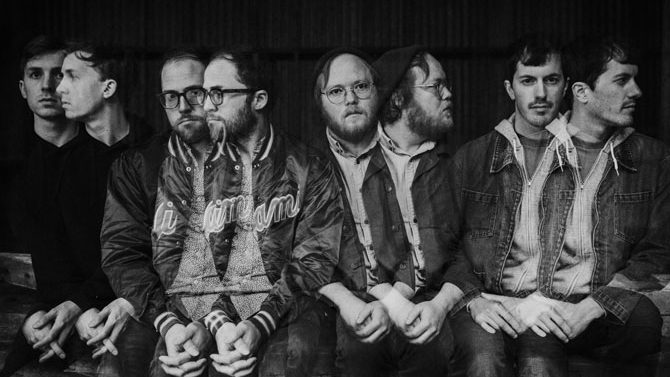 In January 2015, local alt-rock quartet Grand Vapids released a stunning, slowcore-steeped debut album, Guarantees. Though it likely wasn’t intended as a statement, putting out a record that early in the year—before much of Athens’ college-aged population is back in town and the music industry has time to snap out of its year-end-list holiday coma—implies at least a modicum of confidence that it’s going to stick. And it did—Guarantees was named Flagpole’s No. 1 album of the year, with Grand Vapids landing support slots on lots of bills featuring need-to-know touring bands.

But while the band became a citywide name, it never quite gained the traction to propel it to the national stage. The years since have been characterized by losses of momentum due to lineup changes, the dissolution of romantic relationships and other forces beyond the group’s control. Now, refashioned and renewed, the group is set to release a long-awaited second album, Eat the Shadow, a disaffected yet triumphant testament to the power of plowing ahead.

The band’s chief setback came on the heels of the release of Guarantees, when fellow up-and-comers Mothers were beginning to turn heads beyond Athens. Grand Vapids singer and guitarist McKendrick Bearden had assisted with Mothers’ breakout debut, When You Walk a Long Distance You Are Tired. When it came time to tour, he recommended his friend, Patrick Morales, for the role of bassist. “I kind of quit everything in my life to sort of chase that for a while, because it seemed to be going somewhere,” says Morales. “And then it exploded.”

Mothers quickly climbed the indie ladder, garnering critical acclaim for their album and touring their asses off as a result. The stress of that attention, coupled with various personal issues, led to Morales being replaced, ironically, by Grand Vapids’ bassist at the time, Chris Goggans.

While Morales, who would eventually step in to play bass for Grand Vapids, describes the whole scenario as an “emotional clusterfuck,” he now looks back on what transpired and sees his addition to the group as “weirdly fitting… I’ve always been a fan of my friends’ music, and this was a really awesome opportunity to get to play on all the songs I’d kind of been backseat driving.”

“To quantify it,” though, adds Bearden, “I feel like it more or less took a year out of our band’s life. It was still productive, but it was just a year of hard work and some healing.”

The band committed to getting back on solid ground, rehearsing and tightening up again as a live unit while also writing new material as time allowed. (Full disclosure: I heard most of these songs being demoed, as I shared an apartment at the time with the band’s other songwriter, Austin Harris.)

In early 2018, Grand Vapids stepped into Chase Park Transduction to begin recording their sophomore album. The group enlisted producer David Barbe to helm the process, explaining that they wanted a set of fresh ears on the material. Barbe’s approach proved to be a natural conduit for the band’s restored energy.

“I think he assumes your ability and your confidence, and he’s just like, ‘OK, well, you like this sound, so let’s do that,’” Bearden says. “Maybe it’s sort of in the line of Steve Albini’s school of thought, to let the band be what they are.”

Many of Eat the Shadow’s nine songs were recorded live to tape, with Harris’ writing credits outweighing Bearden’s by a slight five-to-four margin. Stylistically, the album retains many of the more gauzy elements of Guarantees, but Eat the Shadow balances them with post-punk influences, conveying an immediacy indicative of the band’s behind-the-scenes goings-on. New York transplant Jesse Lafain has since replaced original drummer Paul Stevens, and he proves a natural fit in accentuating those elements in a live setting.

As much as the band now wants to do the record justice in terms of promoting and touring behind it, Bearden acknowledges that, given all that delayed and then informed its creation, releasing this highly personal document into the world is bittersweet.

“It’s perfect until someone hears it,” he says. “I get a lot of joy out of the making of it, and I’m excited for it to be out and for people to hear it and have it. But yeah, I think the unknown is more tantalizing than the known.”

“It’s like the Schroedinger’s cat of recordings,” Morales chimes in with a smile. “You enjoy it until it leaves the box.”

“It’s more thrilling in that way,” Bearden adds. “I guess where I’m at is, ‘Cool, I’m ready to do it again.’ This has been a few years of our time. It represents a lot for all of us, and now it’s like, ‘Well, it’s not ours anymore.’”