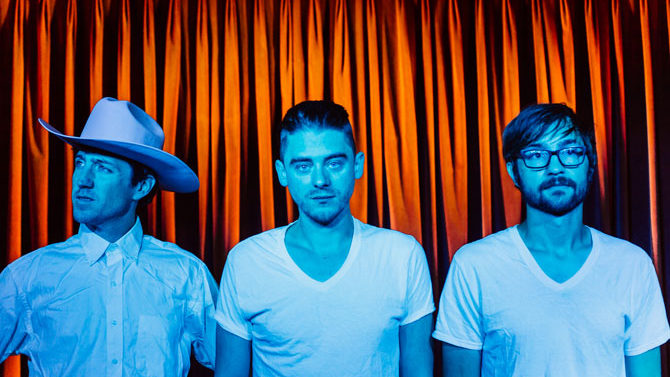 Spring has sprung, and Athens’ musicians have emerged from what seemed to be a scene-wide hibernation with a colorful burst of new releases. This month and the next will see lots of notable offerings, five of which we’ve singled out and rounded up below. Head to local record stores, Bandcamp or your preferred streaming service to scope out the albums listed here, and look for coverage of other releases, including records from Four Eyes and MrJordanMrTonks, in coming issues of Flagpole. [Gabe Vodicka]

What started as of Montreal touring members Nicolas “Dobby” Dobbratz and Davey Pierce’s side project has since morphed into as much of a focus for the now-trio as hitting the road with Kevin Barnes—which, by the way, they still do regularly. Yip Deceiver’s new EP follows the “if it ain’t broke” philosophy, serving up six tracks of simmering, disco-inflected electropop. For the most part, Koniec tempers Yip’s high energy in favor of more laid-back grooves that still sparkle and shine, but closer “The Wave” ends the extended play with the biggest bang, in all its glamorous hi-fi glory. [Andy Barton]

On Wanderwild’s second full-length, the Matt Martin-led trio scales back the rafter-reaching ambience and ethereality of prior releases in favor of more taut yet still anthemic and melodically potent tunes. Mid-aughts indie-rock darlings from both sides of the pond serve as touchstones, as Sleep Tight spills over with the infectious, danceable rhythms and sharp guitar work of The Strokes and their ilk. Album opener “Platinum,” as well as singles “All Around the Room” and “Andy,” position Wanderwild as Athens’ best bet to crack the streaming algorithm, with the band honing its songwriting chops to fit squarely between edge and access. [AB]

Ryne Meadow: There Are Clouds in the Sky

On the surface, it’d be easy to categorize singer-songwriter Ryne Meadow as another Americana-ish artist rambling down the road. Dude allowed himself to be photographed in overalls, even. But There Are Clouds in the Sky is deeper than all that. Although the record begins with a little bombast and orchestra (“Not The End”), it comes into its own on the electric piano-led “Hot Air Balloon.” Overall—no pun intended—Meadow belongs to a school of songwriting that could include Mick Hucknell (Simply Red), Harry Nilsson, Warren Zevon and a few more modern things, like Arcade Fire, et al. This album is a treat. [Gordon Lamb]

Hazy surf quintet Outersea has been a local fixture for some time, drumming up swells of intrigue around its psychedelic take on the instrumental rock offshoot. The band’s first batch of recordings—which have been years in the making, and were pressed on beautiful, swirling ocean-blue vinyl thanks to Kindercore—are an excellent introduction to a unit that has put in ample time navigating the waters and coming into its own. The opening track, “Traitors (One and All),” is a radical sonic odyssey, utilizing classic tremolo surf-guitar techniques and drum rhythms to create a push-and-pull tension befitting a Greek tragedy. Deeper in, “Chad” slows things down a bit and carries just as much emotional weight without a touch of vocals. [AB]

On his slyly dubbed upcoming LP, recorded at Atlanta studio Standard Electric, Athens musician Tyler Key winks at scene conventions while delivering one of the finest local folk records in some time. Key is an occasional member of chameleonic local roots-rock group Georgia Dish Boys, and he and head Dish Boy Seth Martin share a seasoned vet’s songwriting sensibility and an unapologetic affinity for weathered melody. Album opener and lead single “Change My Mind” is all joyous refrain and Music Row finesse, while the gorgeous “West Bethlehem” should be a balm for Ryan Adams fans unsettled by recent allegations against the Americana pied piper. [GV]