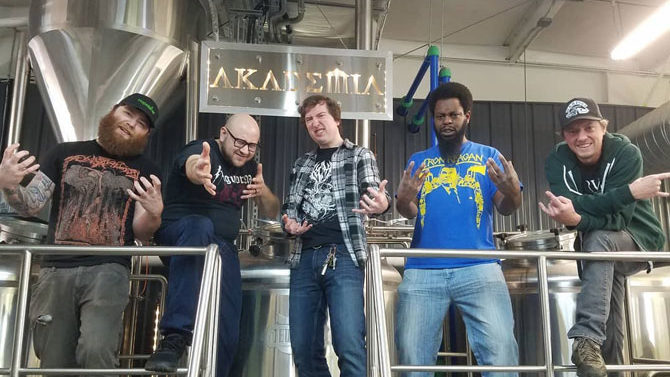 Since opening in 2017, Akademia Brewing Company has served up some of Athens’ tastiest brews. And recently, it opened a new, separate event space dedicated largely to live music. On Friday, the venue will host local metal band Beast Mode, which is teaming up with the brewery to release a new beer as part of this year’s Athens Beer Week, a week of specials and events held in tandem with the Classic City Brew Fest.

The room adjacent to Akademia’s main area has mainly been used for storage since the brewery opened in 2017, but general manager Donnie Malone had other ideas for it, giving it a new name and purpose. For the past two months, it has been known as the Odeon, a new event space and music venue.

Odeon was a term used in ancient Greece and Rome for buildings used for musical performances, which is appropriate for a new addition to the Grecian-themed brewpub. The new room is about the same size as the brewery, and the walls are already somewhat soundproofed, since it was once a Musician’s Warehouse. “It’s like the nicest house show you’ll ever go to,” Malone says.

Malone is a hands-on manager, running sound as well as sometimes setting up a cash bar in the space. With his DIY ideas and talents, he aims to turn it into a venue that books “everything from Christmas parties to, obviously, sick metal shows,” Malone says, referencing Friday’s event.

Akademia’s brewmaster, Morgan Wireman, teamed up with Malone and Beast Mode to brew the band’s own signature beer. Akademia has previously brewed collaborative beers for various occasions, but this one was a direct project, meaning the members of the band actually helped brew the beer and were directly involved in the process. Given heavy metal’s Norwegian ties, they decided to dub the black lager Ølen Av Odin, which means “the beer of Odin.”

Beast Mode bassist Cameron Yohr describes the lengthy process of crafting the beer and says they wanted to make sure it wasn’t too citrusy, hoppy or piney. “It’s gonna be nice and black, which is our favorite color,” Yohr says. “Just a really crushable, good beer to drink.”

The can design was done by Wireman, and it is straightforward, with both the Beast Mode and Akademia logos tied together in a simple design. About five barrels are currently fermenting, and Malone says Wonderbar, Caledonia and possibly some other places in Athens will carry the beer for a limited time after the release party.

“It’s an amazing feeling. I don’t know how many other bands get a chance to brew their own beer and get their logo on the label, and to work with such cool people as Akademia,” Yohr says.

The can release party on Apr. 5 will feature two sets by Beast Mode, exclusive event T-shirts, no cover charge and lots of Ølen Av Odin. Yohr says they’ll play their older music, some newer music and many of their favorite covers. The band is working on a five-track EP to reflect its current lineup of four, re-recording some of its older songs after some member turnover.

The event will also offer attendees a chance to check out one of Athens’ newest concert venues. Malone says he continues to imagine the possibilities for the new space, adding, “This place is a beast.”