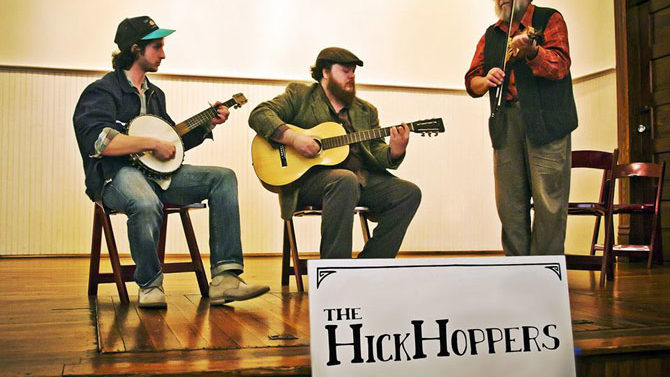 For almost 40 years, the Athens Folk Music and Dance Society has been providing our community with a variety of events, both traditional and modern. One that has continued to be an Athens staple is the group’s contra dance, offered once each month. For a minimal charge, locals can come to Memorial Park to enjoy some live music and traditional dancing.

In contra, a style dating back to the 17th Century, parallel lines of dancers in groups large or small line up and and stand opposite—or “contra”—to their partner. A designated “caller” will explain the steps to the dancers throughout the event, typically accompanied by a live band playing bluegrass or folk-style music. There is no exact formula, allowing contra dancing to be enjoyable for both the novice and experienced dancer.

Athens’ Stuart Whipple has played an integral part in keeping the series alive by organizing the events and bringing in different bands and callers each month. Alongside a small team of volunteers, Whipple keeps the dances running smoothly and works to raise interest throughout the community.

Whipple first participated in contra dancing while he was a graduate student at the University of Georgia, before he relocated for a job. While he was away, he continued dancing and even learned to be a caller. Upon returning to Athens years later, Whipple joined the Athens Folk Music and Dance Society volunteer board and took the lead with the contra dances.

“Some people might call it a little old-fashioned, but it’s not that different from people that are into other kinds of things,” Whipple says.

Whipple says, on average, the number of dancers at the events range from 25–60, and the ages vary greatly. Typically, there are a lot of beginners, which adds to the fun. He says it’s a very physical activity that you can’t fully appreciate without trying it. “If I’m calling, my favorite part is to have some new folks there,” he says.

Bands and callers are a crucial part of every dance, and Whipple does his best to switch it up each time, with both local and out-of-town guests featured. Local bands that frequent the event include String Theory and Joe Willey and the Movin’ Men.

The range of musicians and callers brings a variety to the series, but the core of contra dancing is always there. “It takes a tradition that’s been going on a long time, and it basically brings it up into the modern era,” Whipple says. “I think the spirit of the dances has remained pretty consistent over the years.”

Indeed, the people involved have changed, but they have always had the same goal: keeping the tradition alive. Whipple says participants see themselves as the ones keeping the flame going and preserving the culture of contra dancing.

In fact, the popularity of contra and the organizations promoting it continue to grow in Athens, Atlanta and beyond. Over the years, Whipple has met many people at various events and workshops who now come to his dances to participate and call. He says their goal is to share this style of performance with the community and give people both a change of scenery and a way to get their minds off their daily stresses.

The local dances are held the third Saturday of each month at the Memorial Park administrative building from 7:30–11 p.m. Guests of all levels of experience are welcome to join, as there’s always a short introduction at the beginning. This month’s dance features music from Atlanta band The HickHoppers, plus caller Janet Shepherd. For more info, visit athensfolk.org.