With First Album, The Voltures Prove the Athens Music Kids Are All Right 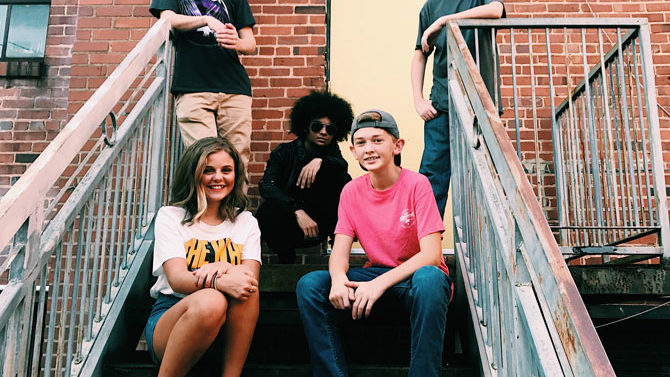 On Wednesday, Nov. 14, The Foundry will host The Voltures for the release of their first album, Kaleidoscope. The five-member, all-teen rock group will perform a set of their original indie-rock music, plus a few select covers. The show kicks off at 8 p.m. with a set from local band Box of Rawks.

Vocalist Grace Kanavage says the young band’s music has already evolved. “Over the course of time, we started figuring out how we worked and what we sounded like, and we decided that we wanted to make an album,” Kanavage says.

The Voltures—whose other members are guitarists Alex Redmon and Owen Hebenton, drummer Blaze Mason and bassist Jake Pence—have played around Athens at various events like farmers markets, AthFest, AthHalf and the Twilight Criterium, as well as venues like the 40 Watt Club and The Foundry. (As for why they chose the latter club for their album-release show, Kanavage says, “It’s just a really cool venue—and you get to eat.”)

Though their sound is undeniably classic, The Voltures primarily hope to reach their peers with their music. “The older people appreciate it more, but when [the younger people] get into it, they bring a really good vibe to the shows,” says Kanavage. She adds that she hopes people relate to her lyrics in a personal way, to realize that “you’re not alone, and at least one person understands it.”

While balancing high school and social activities, band members met for weekly practices at Nuçi’s Space. Initially, they played exclusively covers, but they eventually began to create their own songs. Kaleidoscope is the culmination of a year-and-a-half of hard work.

Kanavage says all the songs on the album have different inspirations and were written in different places. The title track was written on the way home from band practice one night, and the familiarly titled “Bloom” was written after guitarist Alex Redmon played a riff that “stirred up all my Nirvana teen angst,” Kanavage says. “Bloom” is her favorite song to play, she adds.

The whole band laughs when discussing the origin of “Sunny Days,” which was apparently inspired by drummer Mason’s “attitude problem.” (“I think we’re very honest,” Mason says about the song’s lyrics.)

Kanavage says that, so far, feedback for the album has been good, but that “there’s definitely room for improvement.”

While admitting they often have differing opinions, The Voltures say they tend to avoid conflict by being honest with each other and working together to create. Above all, they bond over a love of music, and a desire to share that music with the wider world. “I really like being able to put my feelings into words and being able to share them with people,” Kanavage says.