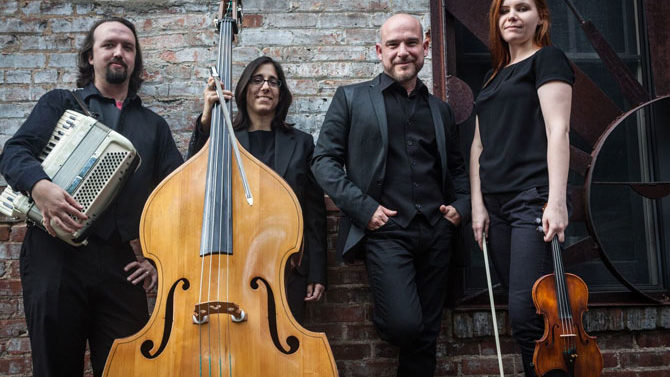 On Friday, Hendershot’s will host the rich cultural force that is Athens Tango Project. But this won’t be an ordinary performance from the local Latin-music standout. The group will combine its high-energy modern and traditional tango with versions of rock and pop songs by iconic Athens bands. Special guests will include Jason NeSmith and Vanessa Briscoe Hay of Pylon Reenactment Society, percussionist Eddie Glikin and others.

“I want to invite people to celebrate the music of Athens and celebrate the spirit of being creative and keeping things exciting and different,” says Athens Tango Project founder and double bassist Laura Camacho. “I think that’s the spirit in Athens: They welcome you.”

The concert will include tango-infused covers of tunes by Kishi Bashi, R.E.M., Neutral Milk Hotel, The Olivia Tremor Control and Pylon, all of whom have impacted members of Athens Tango Project personally and musically. Camacho says the renditions will hold true to the songs’ original melodies, but also use rhythm and instrumentation to give them a traditional tango style. Violinist John Cooper says the show will be “a big celebration, [a way] to have a good time, celebrate Athens and put out some awesome music.”

Now six years old, Athens Tango Project won the World category at both the 2014 and 2016 Flagpole Athens Music Awards. Since its formation, it has broken local listeners’ preconceptions of tango and introduced them to the culture of Argentinian music—often by blending it with the modern flavor of American rock.

“This event comes from our [desire to bring] together types of music that we love. It might seem different on the surface, but it’s all related to human experience and music that we all enjoy,” says Camacho.

Members of the band describe the rehearsal process for Friday’s show as a lot of experimentation and working with one another to find what worked best for the songs and the group.

“We wanted to branch out with stuff that we loved and basically honor the town,” Camacho says. “Tango is not one thing, like rock is not one thing—it’s a really rich musical culture. The fact that they’re gonna see us do different arrangements of the songs they know is gonna show how the structure and soul is the same.”

Vocalist Monique Osorio describes the event as a merging of traditional and modern sound “that shows the extensiveness of tango and how it really is a relevant dance style… you can make it shine in anything.”

Friday’s show is yet another example of how deeply Athens Tango Project has integrated itself into the Athens scene and the local community since its formation. The group has worked in schools and at the University of Georgia teaching seminars on tango music, which Camacho says is one of her favorite things to do, as many people don’t know much about the style.

Also performing will be Atlanta-based Identikit, a six-piece ensemble playing original music from a wide range of influences, including Latin, jazz, rock, swing and more. Audiences will also enjoy local dance groups Athens’ Tangueros, Dancefx and SALSAthens. The three dance groups will kick off the event at 8 p.m. followed by Identikit at 8:30 p.m. and Athens Tango Project at 10 p.m.