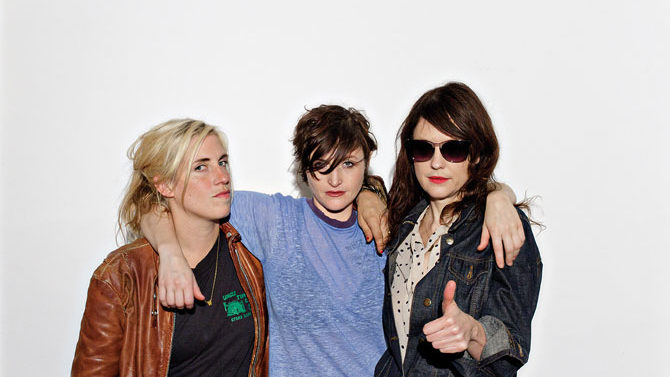 After a decade-long hiatus, Brooklyn, NY band The Essex Green has returned to the fold with a new album, Hardly Electronic, on Merge Records. The power-pop group boasts a long-distance Elephant 6 membership and even released its first full-length on Athens’ Kindercore Records, which should give enough hints as to the type of playful yet poignant ditties it’s capable of crafting. Despite the years, Hardly Electronic finds the band picking up just where it left off and even taking a few steps forward. [Andy Barton]

Ohio quartet Guided by Voices has been making music since the mid-1980s, and is known for pioneering a lo-fi aesthetic that would define a generation of indie rock. While its lineup may have changed—with frontman Robert Pollard the sole constant—the band’s pop prowess and insane prolificacy has remained. Not only did GBV release the 15-song full-length Space Gun earlier this year, it also hammered out a two-song 7-inch last month. To keep the party going, the guys stop by Athens as part of Popfest 2018. [Lauren Leathers]

Washington, DC has catapulted a number of punk acts to national underground prominence in recent years, which isn’t totally surprising given its history of foundational Dischord artists in the ’80s—and, you know, that dude who’s our current president. From the same scene that propped up Downtown Boys and Priests comes Flasher, a slightly more danceable post-punk group that flashes a new-wave smirk every once in a while. The band’s debut full-length, Constant Image, has been turning critics’ heads since its release in June, so get it while the gettin’s good. [AB]

New Zealand-born, New York-based singer-songwriter Dean Wareham has founded two highly influential indie-rock acts—Galaxie 500, whose airy slowcore inspired a generation of like-minded (and generally lesser-talented) acts, and Luna, the immaculate dream-pop outfit that returned last year with an album of covers and a bonus set of new instrumentals. Wareham, who also moonlights as an actor and film composer, hits Popfest by his lonesome to play tunes from his bands’ back catalogs, as well as his self-titled 2014 solo album. [Gabe Vodicka]

Public opinion hasn’t always been kind to punk, with the genre being associated in the minds of many with violence and rage. Ex Hex proves the negative stigma wrong with every ebullient track from its 2014 debut, Rips. The trio is no stranger to the scene, with its seasoned performers including singer and guitarist Mary Timony (Wild Flag, Helium), bassist Betsy Wright (Bat Fangs) and drummer Laura Harris (The Aquarium). Though the group hasn’t released any recordings since the debut, its lasting impression echoes with every live performance. Punk may have always been about making noise, but Ex Hex’s loudness burns with joyous enthusiasm. [LL]

Popfest 2018 will end not with a whimper but with a gauze-wrapped bang, as reunited garage-rock weirdos The Mummies take the Georgia Theatre stage. The California band, whose wild, scorching “budget rock” features elements of surf, punk and horror, only released one proper studio album in its original heyday—1992’s Never Been Caught—but remains a cult favorite for its DIY ethos, outlandish stage presence and give-zero-fucks live show. [GV]