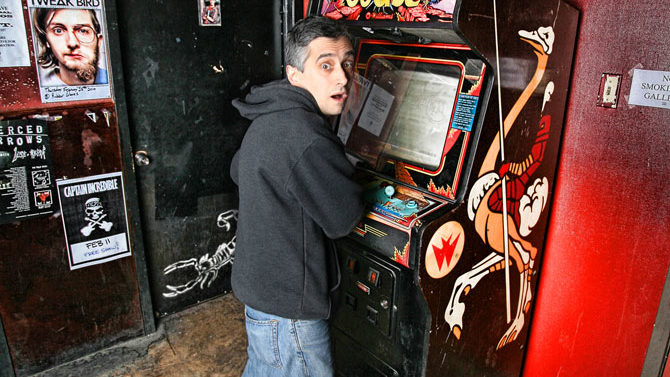 As a teenager in Philadelphia, Joe Genaro dreamed up the character Joe Jack Talcum for the then-fake punk band that would soon practically change his name and consume his life.

“I was listening to lots of British Invasion stuff and Bob Dylan, and I envisioned the Jack Talcum character as a folk singer turned punk,” Genaro says. “He wanted to front a punk band. It’s just an imaginary story. I made up the Dead Milkmen as the band he infiltrated with his brand of folk-punk.”

Home-recorded cassettes of songs about this pretend world gained enough momentum through fanzines to necessitate a live band. Although the future Joe Jack Talcum, singer Rodney Anonymous and bassist Dave Blood almost balked at using a band name so similar to Dead Kennedys, drummer Dean Clean unknowingly twisted their arms into sticking with the original plan.

“Dean, our drummer, more or less insisted that we keep it, because he made the cow logo,” Genaro says. “He auditioned for us, and of course we said yes. He came to our first practice with ‘Dead Milkmen’ stenciled onto his drum cases. At that point, I thought we couldn’t make him cover that up.”

The ramshackle Dead Milkmen ascended to a record deal with Enigma within two years of their debut show. The group’s ’80s run needs no introduction, thanks to the staying power of several songs, namely “Punk Rock Girl.” Originally written by Genaro and Dave Blood for their Ornamental Wigwam side project, it became the best-known Dead Milkmen song sung by the real Joe Jack Talcum.

In the ’90s, two lesser-known yet solid Dead Milkmen albums issued by Disney-owned Hollywood Records featured more songs sung by Genaro than past releases, making them previews of future projects. Among the better songs is “The Secret of Life,” an oddly gorgeous selection inspired by the Unarius cult’s campy film The Arrival. It’s one of several Dead Milkmen songs, including old standby “Dean’s Dream,” that translates well to Joe Jack Talcum solo sets.

“What was happening at the time is Rodney started sending out for pamphlets and tracts from weird conspiracy people,” Genaro says. “He even had a video from a church that believed in UFOs. When we were reading all this stuff, it was the inspiration for the UFO theme. It also inspired ‘All Around the World,’ which is about a guy who really thought he was implanted by the government.”

The Dead Milkmen went on hiatus in 1995, but Genaro continued recording and touring with other bands, including Butterfly Joe, Touch Me Zoo and The Low Budgets. In 2004, an opportunity for a one-off solo gig became a long-term means to perform his large catalog of home-recorded songs, many of which had never been performed live.

Performing with just his guitar and harmonica, Genaro’s solo sets draw from his longtime interest in Dylan and the 1960s folk revival. It also helps that he used to sop up folk standards discovered by Alan Lomax through an unusual source: kids’ records.

“I remember very well from my very early record-listening days a kids’ version the song ‘Rock Island Line,’ which I guess is an old folk tune that became a skiffle tune as well in England,” he says. “I didn’t realize that until later on.”

Solo performances are simply billed as Joe Jack Talcum, a name Genaro adopted over time with the Dead Milkmen. He’s more or less stuck with the moniker now, as he’s been the embodiment of his traveling folk-punk singer longer than he was in the Dead Milkmen during its original 12-year run—or since the band’s 2008 return.