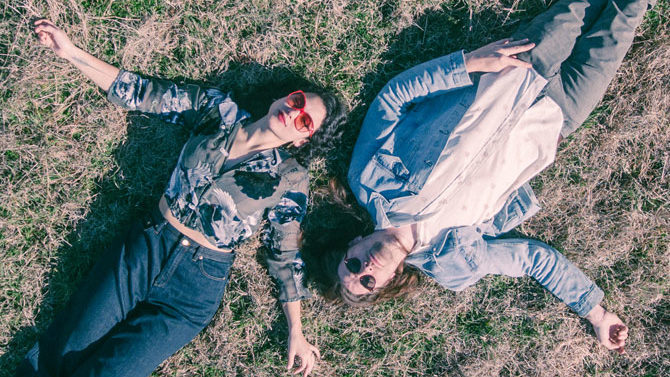 Although its name reflects that unavoidable summertime buzz that swarms the region every few years, local Americana duo Cicada Rhythm built a reputation beyond Athens off its modern interpretations of popular music’s Southern roots. On the band’s new album, Everywhere I Go, Juilliard-trained bassist Andrea DeMarcus and guitarist Dave Kirslis wrote songs in the same vein as past releases. But instead of working with a local engineer on stripped-down folk tunes, the duo sought help in Music City. This turned what otherwise might’ve been acceptable album tracks into solid foundations on which producers Kenneth Pattengale (Milk Carton Kids) and Oliver Wood (The Wood Brothers) could build a broader sound.

Pattengale did a lion’s share of the production work, recording the band at his Nashville home and in various studios. On Cicada Rhythm’s end, the group brought a strong selection of new songs and a willingness to be constructively criticized by its new supporting cast.

“It definitely took us out of our comfort zone,” DeMarcus says.”We always made our music in Georgia—primarily in Athens. We got quite comfy with our friends. Not that that’s a bad thing, but it pushed us to be a little bit better going into it. We had rehearsals just for recording, which had never happened before.”

“There was a lot of back-and-forth about that organ part,” Kirslis says. “Some people loved it. I loved it. But some people were like, ‘No, don’t do that!'”

As DeMarcus plainly puts it, the organ part adds a hook to a song that needed one. It doesn’t lessen the duo’s folk sincerity, nor does it water down its sound or turn it into a garage-punk band. If anything, it’s the same progression Bob Dylan experienced in 1965, when he first plugged in his guitar at Newport Folk Festival and had Al Kooper play that sweet organ part on “Like a Rolling Stone.” (Folkies are more prepared all these decades later to embrace such changes, so hopefully it’s not a polarizing development.)

Other added bells and whistles, including Pattengale’s own electric guitar riffs, came via forces outside of the band.

“A lot of the auxiliary instruments on the record came from Kenneth and his source of immeasurably talented friends,” DeMarcus says. “We would go up there and record, and then he’d spend the following week inviting his friends to his house and recording them. The violin and the cello are [played by] two of his really great friends.”

Wood produced three tracks—the rollicking duet “Shake Up,” DeMarcus’ socio-political statement “Do I Deserve It Yet” and the orchestral indie-rock opus “Even in the Shadows.” Among his creative wrinkles was the decision to capture these songs in an old church with high ceilings. When Pattengale wanted to record the tracks “Roses By My Side” and “Back Home” live, he took the band back to the church to recapture that same intimate feel.

By incorporating both producers’ similar yet distinct visions, DeMarcus and Kirslis added new facets to their already proven creative process.

“It was awesome, because we could fall in love with our songs in a different way,” DeMarcus says. “They weren’t completely overworked or even created from desperation. I feel like sometimes in the studio, you’re kind of like, ‘Oh, we’ve got to come up with something good.’ Kenneth kind of took that away from us so we could just look at it from the outside. That was really cool.”

However, neither band member sees this new recording process as cause to shake up their songwriting approaches or creative goals.

By placing more trust in ambitious out-of-towners, DeMarcus and Kirslis found themselves freed up to focus on their bread-and-butter—genuine, roots-based songwriting. As long as they keep writing straight from the heart, expect this fuller take on a proven formula to remain the perennial soundtrack of fans’ hazy Georgia summers.