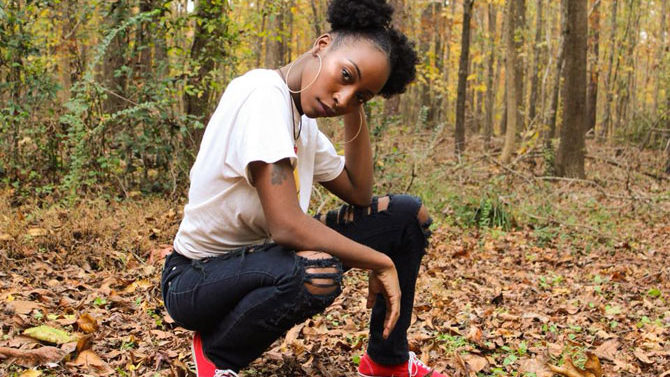 Karica Smith, aka Seline Haze, embraced music only a year ago, and she hasn’t looked back. “It just hit me last year, to be honest,” she says. “Before that, I was just doing freestyles. I was doing poetry, as well. I have my own blog, and it just kind of formed into music. Why not combine your poetry and music together as one?”

Haze says she was intrigued not only by the opportunity to share her story, but by possibly inspiring others and empathizing with them through music. “I’ve been through a lot in my life, [so I thought] ‘Maybe I should just do it… and maybe I can help somebody out there,’” Haze says. “Hopefully, someone can come to me and say, ‘You saved my life,’ or ‘You helped me get through something with your sound and your music.’”

At first, Haze spent most of her time freestyling with friends, before members of The YOD pushed her into performing. “I was nervous,” Haze says. “[Trvy] was like, ‘You can do it,’ and I did it. I was nervous, and I wasn’t making any eye contact on stage. I was looking down at the ground and at people here and there, but I was mainly looking down. Afterwards, I felt so good doing it… it was a great feeling.”

Haze brings a jazzy feel to her music, along with personal lyrics based on her life. Growing up, Haze says she listened to Tupac. His influence combined with that of newer artists such as Kendrick Lamar, Mick Jenkins, J. Cole and The Internet to mold Haze’s sound. “It’s me,” Haze says. “It makes you feel something, and it’s raw hip-hop.”

Dedric Knowles spent three years at Georgia State University chasing an accounting degree he wasn’t sure he even wanted. All the while, he was dealing with the pressure of becoming the first person in his family to get a degree. Knowles soon realized that he had a passion, but not for education. In fact, pursuing his education was keeping him from doing what he loved.

Knowles, who developed alopecia while in college, says he struggled with depression and grappled with the idea of dropping out. His release—and, he realized, his passion—was music. Listening to Kendrick Lamar’s To Pimp a Butterfly helped Knowles through that stretch. He decided he was going to make music in hopes of doing for others what that album had done for him. Knowles, whose stage name is DK, used inspiration from Lamar to craft his sound.

“My hair started falling out. I was hitting these deep depressions, but the way I was coping with it was through music,” Knowles says. “[Kendrick] had songs like ‘u’ that really dive into the very depressing mental state that comes as a result of survivor’s guilt, which I was kind of feeling. It got to a point where I wanted to recreate that feeling for others.”

The challenge was telling his family that he wasn’t going to stay in college. He was surprised and relieved that they supported his decision. “I brought it to their attention, and they were actually very receptive,” Knowles says. “My dad actually used to rap. It had kind of slipped my mind, because people were so bent on me going to college, and I’d forgotten they made music themselves.”

Kxng Blanco discovered his ability by accident. He’d grown up listening to Michael Jackson and Prince, so he took a shot at imitating them at the Cleveland Road Elementary School talent show. He’d never sung before, but once he did, the audience was shocked at what came out of the young Blanco. He, too, was a little surprised, as it was his first time singing in front of people. He quickly fell in love with the feeling of being in front of a crowd. “It was electrifying,” Blanco says. “Everybody was surprised. I was surprised, because I didn’t know I could sing… Just being in front of maybe those 20 people gave me a rush. I just got addicted to it.”

After a few years—and a voice change brought on by puberty—Blanco moved away from music. He gave football a try, but “I was not good at it,” he says. “I wasn’t physical enough.” Soon, music called again, this time in the form of rap. But it wasn’t as natural as it had been for him as a youngster. Hip-hop was a more skill-driven pursuit, requiring polish and rhythm. Blanco almost walked away again before friends talked him into writing lyrics and giving it another shot.

“I couldn’t write for nothing,” Blanco says. “I gave up on it. I came back to it when I used to freestyle with my friends on their porches in the summer. They were like, ‘You should try it again,’ and this time it worked.”

Blanco’s music comes from what he knows. He grew up listening to Jackson and Prince, but his influences these days are local artists. Blanco says he was heavily inspired by Dictator and Cassie Chantel. “I was raised around [music],” Blanco says. “It was around me, so why not try?”