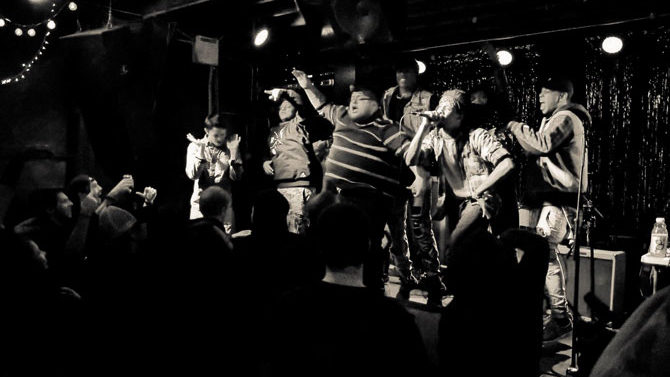 “Pack mentality is a huge thing [for us],” member Trevor “Trvy” Wiggins says. “People always want to find people that think the way they do, but [are] different enough that they challenge them. I think artistry works like that for us.”

Many of the group’s members even live together. “It’s a family, and I mean that literally, because we’re sleeping together under the same roof, we eat the same food, we break bread,” says Garrett. “When we eat, we all eat. We try to do everything together. Not everyone in the group came up the same way. Not everyone is going to have one thing that somebody else might have. We really try to do our best to share.”

The group’s home base, playfully dubbed Murder House after the haunted domicile in season one of FX’s “American Horror Story,” is a hub for many local musicians. It’s also host to a 24-hour studio, where, at any given time, someone might be found laying down tracks.

Despite the house’s nickname, it is never devoid of life. The house in “American Horror Story” played tricks with time, slowing it and speeding it up. For The YOD, this was the chief inspiration for the name.

“Time moves differently for us here,” Wiggins says. “If you leave for three days, you’ve missed a whole wave of things that have happened. You’ve missed the jokes, new songs. I’ve come home after working a 12-hour shift one day, and they had a whole album done.”

Since the group started half a decade ago, new members have joined, but its chemistry hasn’t gone away. Every member has a creative say, and everyone is confident in what he brings to the table musically. According to Wiggins, each member feels he could make great music if he were alone, but they have all chosen to enrich themselves by sharing their knowledge and talents with one another.

The group’s size is also a bonus for practical reasons. The YOD’s members also make sure to hype one another’s projects, especially on social media. Each member has a built-in army of backers that act as free advertisers and advisors for his own name and brand.

“We all are 100 percent confident that we can make the best [music] in the group. There’s that ego there, that Kanye West thing,” Wiggins admits. “But even Kanye West built G.O.O.D. Music, and he’s the epitome of what people consider an egomaniac. He built G.O.O.D. Music, which is just a collection of people he felt complemented him or added something. That’s the same thing with us. These days, you can’t do it alone—you can put out a song on the internet by yourself, but if nobody shares it, it doesn’t matter.”

Yet musically, The YOD works best as a unit, as proven by the group’s debut album, Checking In, which it will release at the 40 Watt Saturday.

“I don’t think any of [our] challenges have anything to do with music,” Garrett says. “It’s more of, who’s going to do the dishes today? Who’s taking out the trash? Who’s taking the dog out today? It’s never an issue with the music. I don’t how many times I’ve come home from work and I’ll go into the studio and somebody is recording or sitting there… Everybody is willing to share; everybody is willing to do their own part.”

When building the group, its core four members searched for people with different voices, takes on life and ways of thinking. But their main goal was to be unique. The YOD has achieved that, from the sound of its music to the personalities that populate Murder House.