Through Music and Politics, Linqua Franqa Calls on Athens to Act 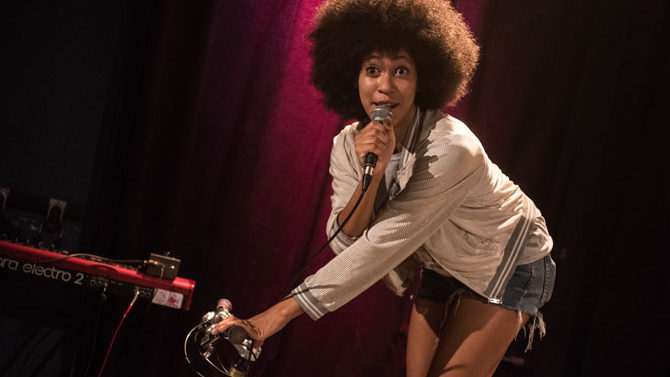 It was hard to miss Linqua Franqa in 2017. The linguistics doctoral student turned Athens It Girl—known to friends and family as Mariah Parker—released her self-titled debut last February and quickly took the Classic City by storm, bridging cultural divides and injecting a hefty dose of sociopolitical awareness into local music in the process. Her skillful turns of phrase, magnetic live show and nonstop activity paved the way for a best hip-hop artist win at last summer’s Flagpole Athens Music Awards, and she wowed at ensuing slots opening for of Montreal at AthFest and ESG at Athens Popfest.

With Model Minority, HHBTM Records’ impending vinyl re-release of her debut, Linqua Franqa is prepping for the limelight once again. The reissue includes a new track, plus a slew of remixes from her beatmaker-in-chief, Wesley Johnson, aka WesdaRuler, as well as Savannah emcee Dope Knife. But as attention continues to mount for the gold-bike-riding rapper, Parker is staying grounded, keeping her performing alter ego and musical ambitions in check with another personal passion: local politics.

“By some metrics, my life is in shambles,” Parker jokes over a beer at Walker’s Coffee and Pub. It’s a little after 8 p.m., and she’s just now finding time to decompress, revealing her secret to how she manages to wear so many hats without completely losing her mind. “At some point, when you’re so passionate about so many different things, and you feel called to do them… you learn to operate at a lower threshold,” she explains. “You have to either go insane or accept that 50 percent is good enough.”

It’s likely that Parker is her own harshest critic, though. After all, she’s partially responsible for putting Athens hip hop back on the map.

Parker adopted the Linqua Franqa name (then Lingua Franca; the spelling was recently changed) in 2015 after moving to Athens from Asheville, NC, new to the city and eager to create a fresh identity. As a regular at The World Famous, it wasn’t long before she approached a friend working there about organizing a hip-hop show. It drew an unexpectedly sizable audience, convincing Parker that there was more work to be done. “When I saw the amount of people that coalesced around it, from that first show, I knew that we had to keep doing this,” she says. “I knew we had to keep cultivating that.”

From there, Parker became instrumental in reinvigorating the local hip-hop scene, booking Hot Corner Hip Hop events, connecting like-minded artists and bringing outsiders into the fold. “She’s provided a platform for local hip hop to thrive,” says her friend and producer Johnson. “It’s even brought life to movements that were already in place, but struggled to continue [growing].”

With the scene thriving, Parker felt it was time to decentralize. She didn’t want to be viewed as the gatekeeper or spokesperson for local hip hop. She had also been taking a much harder look at the rooted issues permeating Athens’ political and socio-economic framework.

“It’s so much deeper than just getting people to come to shows,” Parker says. “Why do you think it was that there weren’t a lot of black people in the music scene? Those questions are not just a matter of, ‘Well, this bar is too kitschy and white,’ and that’s just it. It’s way, way deeper than that. If you want to have a really thriving and diverse and fruitful culture, one that’s constantly generating cool shit, you’ve got to fix the underside of it that’s creating [those] conditions.”

One particular message started to resonate more and develop a life of its own. As Parker raps in her song “The Con and the Can”: “Cuz everyone wantin’ to complain about the state of the system, congratulate themselves on Facebook for paying attention/ And homie, I know you’re right, but if nobody mobilizes and noble fights, shit/ We staying slaves for centuries.” It’s a comment on the trappings of being social-media woke without making motions towards progress in real life, but it’s also a personal call to action. “The only way I have to fix it is cashing my chips in,” she concludes.

“When it comes to Mariah’s music, the lyrics are what sets her apart, in my opinion,” says Pity Party house show organizer and Perfect Attendance Records head Taylor Chicoine. Chicoine and Parker have encouraged each other’s projects, and he recently produced the video for Linqua Franqa’s “Gold Bike.” “It’s real, raw truth,” he continues. “I’ve seen people become uncomfortable upon understanding some of her lyrical content, but that’s the point, I think. There are lots of issues in our society that don’t get properly dealt with because they make people uncomfortable.”

Parker’s rhymes often make those raw truths more palatable, so it wasn’t much of a jump when she dove headfirst into introducing those ideas to an even wider audience by joining Tommy Valentine’s campaign for Athens-Clarke County commissioner. Valentine saw a Linqua Franqa set and continued to run into Parker at activist circles before having a long conversation about music, language and politics and extending an invitation to join the campaign. Now, Parker serves as Valentine’s campaign manager. On their docket: improving community relations with police, fighting for a living wage, securing better public transportation and creating more opportunities for continuing education for adults.

“From the moment we started this campaign, we said that we hoped it would be about more than a moment. We wanted it to be a movement,” says Valentine, himself a former Athens emcee. “Thanks to Mariah, we feel like we’ve succeeded well before Election Day.”

As the campaign narrows in on the May 22 election, Parker continues to advocate on Valentine’s behalf by canvassing, organizing town halls and more. And while politics has taken the front seat most recently, Parker still has plenty of musical plans, and a few beats ready to go for a new album. She’s still mulling over subject matter, though it shouldn’t take long for her to piece things together once she gets into the studio. “Until I sit down with a beat and let it tell me what the story ought to be, I don’t really know what the story will be,” Parker says.

One issue she is interested in tackling is combating inaction. “It’s something I’ve wanted to write about and foresee being a very prominent theme in my next work,” she says, “especially as I deal more and more with trying to empower people politically, and [find] that a lot of a certain kind of person feel[s] very paralyzed with guilt into not acting. Like, ‘Oh, well everything’s so terrible, and I’m so terrible; I can’t do anything,’ and having to work around that with folks.”

Whatever the calling—politics, music or language—Parker is eager to continue bettering herself and her community. One thing is certain: She’s going to stay busy as hell.

“I haven’t worked around that with myself, of like, ‘I’m a garbage human; I’ll never amount to anything,’” Parker admits, before her tone turns from critical to hopeful. “People need more than that from me. People of the world need more of that from everyone.”

UPDATE: After this story was published, Parker announced her candidacy for Athens-Clarke County Commission in District 2. Read more here.