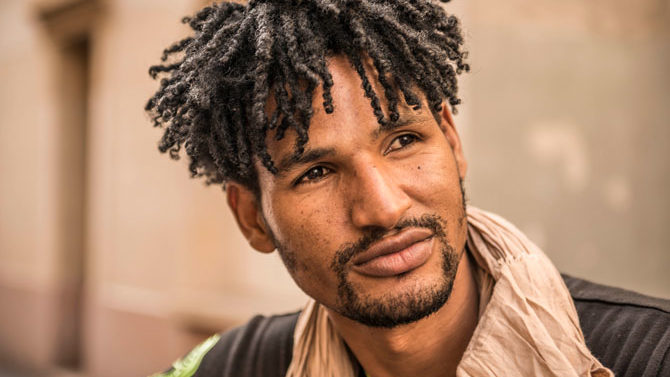 While much of the West’s exposure to Tuareg culture is tied to the ethno-political conflicts that have played out across North Africa over the past few decades—and the rebellious desert blues that’s taken shape as a result—a relatively fresh face is steering his people’s music into even more modern territory.

Anar, the first album from songwriter and guitarist Mdou Moctar of Niger, was released in 2008, featuring heavily autotuned vocals and electronic instrumentation largely avoided by most popular Tuareg musicians. The spaced-out tunes spread like wildfire throughout the Sahara as files were shared via cellphone SIM cards. Sahel Sounds label founder Christopher Kirkley included the title track on one of his Music From Saharan Cellphones compilations, sparking a working relationship that would lead to Moctar’s first film role.

Released in 2015, Akounak Tedalat Taha Tazoughai, which roughly translates to “Rain the Color of Red With a Little Blue in It”—an homage to Prince’s Purple Rain—is not only Moctar’s premiere screen appearance, it’s also the first-ever Tuareg-language film. The movie will be screened in its entirety at Trio Contemporary Art Gallery on Tuesday, Oct. 10 before Moctar performs a live set on the Georgia Theatre Rooftop.

More Tuareg Music to Check Out

The Mali collective Tinariwen has gained increased exposure over the last two decades with a string of critically acclaimed albums, positioning it as arguably the most well-known and influential Tuareg ensemble in existence. Formed in the late ’70s by Ibrahim Ag Alhabib and fomented in a Libyan military training camp, the group has consisted of a rotating cast of players throughout its three-decade lifespan. (It even played the baptism of its youngest member, Eyadou Ag Leche.) Tinariwen’s 2011 album Tassili, featuring contributions from Wilco guitarist Nels Cline and TV on the Radio members Tunde Adebimpe and Kyp Malone, won the Grammy for Best World Music Album, and is a great place to get acquainted with The Desert Boys’ sub-Saharan blues repertoire.

Niger native Bombino is probably the closest thing to a Western rock star you’ll find in the Sahara. After fleeing the country in the early ’90s amid Tuareg rebellion, Bombino taught himself guitar, studying the styles of Jimi Hendrix and Dire Straits’ Mark Knopfler before eventually forming his own band, Group Bombino. After some prodding by filmmaker Ron Wyman, Bombino recorded and released his standout, Agadez—named after Niger’s largest city and the guitarist’s home base—in 2011. Since then, Bombino has worked and toured with a range of notable names, including Robert Plant, Dan Auerbach of the Black Keys and David Longstreth of Dirty Projectors.

Founded by former Tinariwen member Diara Ag Ahmed and aided by his two nephews, Sanou and Pino, Terakaft dabbles in a brand of desert rock similar to Tinariwen, if not even more movement-inducing. The group draws its name from the Tamasheq word for “caravan,” and its melodies are equally roving, meandering and bobbing along with rhythmic sway as call-and-response lyrics trade off with evocative guitar leads.

Timbuktu group Tartit, taking its name from the Tamasheq word for “union,” is comprised of five women and four men. Formed in a Burkina Faso refugee camp in the early ’90s, Tartit began gaining traction a few years later after a handful of high-profile festival appearances and performances alongside Tinariwen, Plant and renowned guitarist Ali Farka Touré. The group’s music and humanitarian work focuses on community and culture, with the women all playing tinde drums and the men playing traditional string instruments as all chant. Tartit’s members have also been recognized by the United Nations for their work developing schools and opportunities for women in their native Mali.

Sublime Frequencies, a Seattle label focused on “acquiring and exposing obscure sights and sounds from modern and traditional urban and rural frontiers,” has a vast catalog of ethnographically inclined recordings, housing everything from the pop stylings of Syria’s Omar Souleyman to traditional folk songs from a variety of artists in South Asia. Dip into the Guitars From Agadez series on SF’s Bandcamp page for seven volumes of hypnotic Tuareg rhythms from Koudede and Group Inerane.