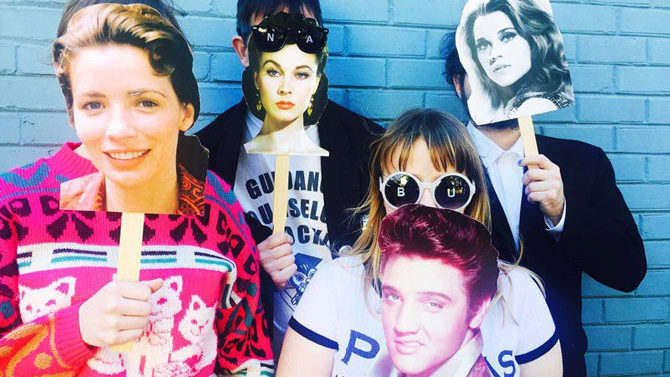 If there’s one thing to be said about Tunabunny, it’s that the adventurous local rock group isn’t afraid to take an idea and run with it, unencumbered and open to where the creative process might lead it. Take the band’s previous two albums, Kingdom Technology and Genius Fatigue, which ostensibly discarded and reworked decades of the rock and pop lexicon. Loud and fast punk numbers made way for hook-laden power-pop before coalescing into off-kilter, synth-tinged drones. In other words, when it comes to Tunabunny, expect the unexpected.

It only came as a small surprise, then, when the band announced in May that its latest undertaking was a double LP mirroring The Beatles’ self-titled White Album titled PCP Presents Alice in Wonderland Jr.

“On the last couple of albums, we had so much material that we always had to cut song lengths to avoid running over time on the vinyl,” writes the band, which insists on being quoted collectively, via email. So, instead of trimming fat from the longer tracks and leaving others off altogether, the band offered to front HHBTM Records head Mike Turner the cash to accommodate its more sprawling songs.

“But then, Mike being Mike, he said he’d just pay for it, and not to worry about it,” writes the band. “So we were stoked, thinking we could stretch out and do some longer songs like we used to do in the old days.”

Writing for the album commenced, but it didn’t involve sit-down sessions dissecting The Beatles’ masterwork song by song, notebooks haphazardly strewn about the room.

“We rely on accidents, serendipity, luck and inspiration to write our songs,” the band says. “Lyrics get written, but most of the time it’s just stuff that sounds cool or evocative—more like describing a film than straight-out telling a story. It’s only later, looking back, that we find connective tissue. There’s all kinds of clues and connections, but you’d have to put a lot of work in to find them.”

PCP Presents provides a welcome update to its original source material, now almost 50 years old. There’s a fair amount of “Ob-La-Di” pop playfulness on ”Incinerate” and “The Rest of Us,” but Tunabunny hits just as hard, if not harder, with a few “Revolution”s of its own. “Blackwater Homes” and “Boundless Informant” present cases of ominous danger, while the back end of the album follows a song cycle centered around motherhood, from delivery to postpartum isolation and the eventual reclamation of identity.

While the record is intended as a response to the White Album, it carries its own weight. The group admits it wasn’t its intention to write something so targeted at the perils and pleasures of 2017, though—it just kind of happened that way. “We didn’t set out to write a bunch of songs about life in the 21st Century—it’s because we live in the 21st Century that we ended up writing a bunch of songs about [it],” the band says.

Sonically, the album is as stimulating as the times and its title suggest. “We wanted the album to be as four-dimensional as possible, to sound as gloriously eclectic as our record collections—that is to say, we wanted to sound inspired by everything: hi-fi, lo-fi, mid-fi, Spotify; Bandcamp, summer camp and writer’s cramp. This album was our chance to spread out, to indulge every idea, to push everything to its limit.”

For its PCP Presents release show, the band is adhering to a philosophy of prompt and early shows born from recent music bookings at the arthouse theater, like the Experimentique Night series and other HHBTM-sponsored performances. There will also reportedly be free pizza and music-video screenings involved.

From there, it’s back to preparing for unpredictability. “We’re planning on this album being a huge success, breaking the indie market wide open and propelling us on to playlists like KEXP and Sirius XMU, whereupon we’ll embark on a U.S. tour playing 1,000-seat venues, which will then build into more mainstream success—late-night talk shows in the fall and then a triumphant ‘SNL’ appearance just before Christmas.

“But of course these are all just plans, and go ask Theresa fucking May what happens when you make plans,” says the band.