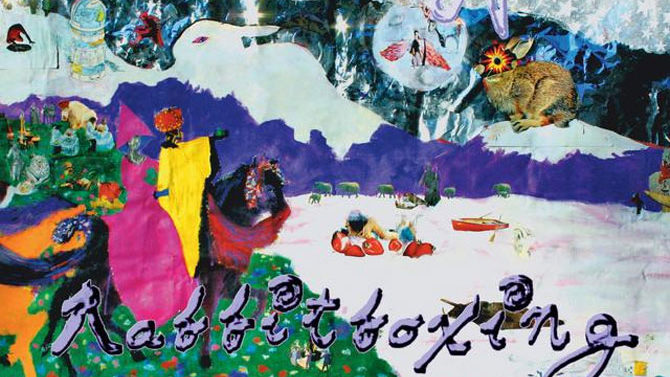 We cover a lot of local music in these pages, but due to the sheer volume of releases, good stuff often gets overlooked. Here are 12 albums from the first half of this year that we thought deserved a little more love.

Caulfield: Under the Influence (Independent Release)

Atlanta’s trap scene called, and Caulfield answered. The rapper has carved out his own space in Athens hip hop, declaring on the EP’s namesake track, “It’s been a minute/ Been itchin’/ I’m back in the kitchen.” In addition to radio-ready fare like “They Don’t Know,” featuring verses from Dictator and Squalle, Under the Influence has some downright dirty gems in “Zoom” and “2 Legit” that provide a pleasure-focused counter to the EP’s opening salvo. [Andy Barton]

Comprised of some of Athens’ most essential experimental musicians—including members of The Olivia Tremor Control and Bubbly Mommy Gun—Lavender Holyfield’s first full-length deftly balances talents and personalities in a surrealist smorgasbord of atmospheric texture, off-kilter melody and starry-eyed lyricism. The psychedelic lilt of “Where Do Those Lasers Go?” and cinematic build-up of “Yellow Crowned Night Hero” point to a group whose relatively short time together belies its chemistry. [AB]

The last couple years have seen the rise of a small but active group of experimental electronic performers in town, with one of its leaders being Michael Pierce, whose Leisure Service alter ego offers noisy variations on minimalist techno. Dank Hell, a four-song cassette released in April, features some of Pierce’s most putrescent work—see “Satan’s Sulphur”—but it isn’t all doom and gloom, as the 808-laden “Human Intention” can attest. [Gabe Vodicka]

Larry Gresham is Blacknerdninja’s right-hand man, contributing both fire and gravitas to that project and its popular live show. His latest solo offering establishes L.G. as a local hip-hop force in his own right. The nine-song record rejects current trends in favor of an early-’90s smooth-rap and R&B sound, nicely situating it apart from the rest of the scene. Two tracks of spoken-word poetry—courtesy of Squalle and Shedrick Barnett—reinforce the album’s contemplative approach. [GV]

Featuring members of Ceiling Fan and The Salt Flats, new local band NSM dropped its debut EP in May. Its five tracks are minimalist dance-pop delights in the vein of ESG, complete with absurdist lyrics and squeaky-clean production. If you’re someone who thinks Athens music has become a tad too self-serious, NSM provides a playful alternative. [GV]

The spaced-out adventure that is the aptly named Uhura is a sample-based experimental techno album from Severe Blush, aka Logan Shirah. The record provokes imagery of lighthearted communications between fantastical alien creatures, but could just as easily soundtrack the building of an ant hill with effervescent tracks like “Ascent to Negation,” “Toad Boogie” and “Moss Garden.” [Frances Newton]

Running a mere six tracks, Visions is a prime example of quality over quantity. Son Zoo’s rapid-fire spitting never lets up. Even when he slows down slightly, like on “Lucid Dream,” his melodies are so on point and sing-along ready there’s almost no reason to ever turn on the radio. Need proof? Spin “What If” and get back to me. [Gordon Lamb]

Scooterbabe’s Evan Tyor released this solo folk album in early May, a forlorn, intimate work permeated by rich instrumentation and nostalgic lyrics. The rest of the Scooterbabe crew is credited on the songs “Homebody” and “Pine Trees,” and while Tyor’s solo project lives and breathes as a separate entity from his other band’s works, it is filled with a similar genuine, tender musicality. [FN]

Under a Sky So Blue: The Spectacle Provides (Star Rats)

After a year-plus hiatus, anarchist band UASSB released this metalcore-influenced screamo album earlier this year. The Spectacle Provides is a truly killer EP imbued with trudging, heavy guitar and drums and reinforced by chaotic, throat-shredding dual vocals. The group’s lyrics feel personally generated but societally motivated, like in “Make a Spectacle”: “You’ve succeeded in cheapening everything, and we can see your sharpened teeth/ What hypocrites.” [FN]

Since 2013, Drew Kirby’s Bananagrams project has brought Athens and Atlanta musicians together to collaborate. Vol. 4 was recorded live to tape, and everyone shared a room, making the project feel more cohesive. The result is an incredible 24-track collection of lo-fi pop and noise songs from some of the best local artists working today. Not every song is a home run, but the amount of talent, combined with Kirby’s excellent direction and curation, make this a valuable time capsule of Athens music in 2017. [Nathan Kerce]

Known as a taste-making, forward-thinking producer, Wes Johnson pushes himself further on 4da99. On his first outing as a rapper, his voice is rich, deep and sharp. Though it’s stylistically similar to several conscious rap artists from the ’90s, those comparisons seem intentional. (Check the title.) The EP is less a change than a continuation, and it’s exciting to anticipate where Johnson will go next. [GL]