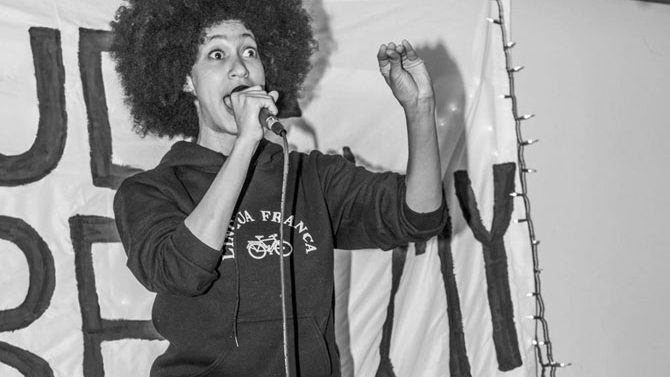 Best known as a co-founder of NYC punk legends Television, Richard Lloyd opted to forgo that group’s recent string of reunion tours in favor of continuing to cultivate his own musical journey. The innovative Strat-slinger released his first solo album, Alchemy, during Television’s heyday in the late ’70s, revealing an affinity for classic American pop and rock sounds. With his touring group, he plays his previous band’s hits, like “Marquee Moon,” as well as original solo gems and unexpected covers. [Gabe Vodicka]

The duo of KyKy Renee Knight and Garrett Knighton have been playing together as Harlot Party for some time now, but became scene fixtures after releasing a breakout EP, I Want to Be Recalcitrant, I Am Just Exhausted in January. The EP’s six songs feature only Knight and Knighton’s interweaving guitars as instrumentation, providing focus for Knight’s heartbreaking poetry. The band has grown considerably this year, and now plays live as a four-piece with drums and bass. Catch them sandwiched in between Mothers guitarist Drew Kirby’s solo project, Civils, and dark gazers Feather Trade. [Andy Barton]

Blue Blood’s Hunter Morris casts himself in a starkly different light on his new sophomore album, Pretty Wars. His latest effort, again produced by Kuroma’s Hank Sullivant, sheds the shadier, Sparklehorse-esque trappings of 2015’s This Is the Life in favor of sunny, ’80s-inflected pop-rock that bounces and bobs like the baited lines Morris has grown familiar with as a fly-fishing guide. Blue Blood headlines the Laser Brains showcase, the freshly minted label also housing Drew Beskin and Palace Doctor, at Little Kings, which serves as the band’s album release show. [AB]

Hit up Ciné on Saturday for something decidedly different from AthFest’s other offerings. For its fifth annual installment, the festival’s official hip-hop showcase is featuring an all-female lineup of local and touring rap, R&B, soul and more, including Atlanta pop trio B.O.Y., local MCs Cassie Chantel and Minnie Lea, and spoken-word mainstay African Soul. The night begins and ends with mega-mixes from two talented local DJs, if you feel like shaking a rug. [GV]

Mariah Parker has called out and crossed over the invisible and unspoken line between Athens’ hip-hop and indie-rock scenes—a divide steeped in racism, classism and a general lack of imagination. Parker has made great strides in bridging that divide to build a better community. The linguist approaches her flow with an academic precision that allows her to kill just about any beat, rapping about social issues as well as her own personal struggles. With the release of her debut self-titled EP and a tour under her belt, Parker has had a stellar 2017. It would be a crime for anyone to miss out on what is sure to be a festival-defining set. [Nathan Kerce]