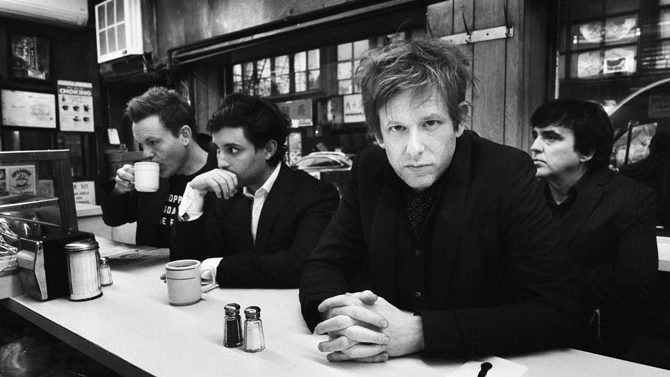 Austin, TX indie-rock icons Spoon can’t seem to make a bad album. The foursome has churned out a slew of solid records over the past 20 years, coloring outside the lines enough with each release to challenge listeners and itself while maintaining a commercial viability necessary to keep its household name. A montage in a TV drama? A rom-com soundtrack? There’s a Spoon song for that.

It comes as no surprise that Hot Thoughts, the band’s most recent album and first for the famed Matador label since the late ’90s, contains plenty of infectious, body-moving grooves. But in the wake of a dismal 2016, Spoon stepped further left of center this time around.

The group’s reinvigorated sense of experimentation stemmed from the final stages of writing and recording 2014’s They Want My Soul. “This one just kind of felt like more of a continuation of ideas, and the way the band was playing together towards the end of [that] tour,” says bassist Rob Pope, speaking from Mexico City, where Spoon recently played three shows before returning to the U.S. “The band was in pretty good shape, and it felt like we were playing really good shows. And so we just got right back into it.

“We had talked about how we kind of wanted to make a record that sounded a little different,” adds Pope. They Want My Soul track “Inside Out” served as the best jumping-off point.

“There’s no guitar on it,” Pope explains. “There’s all these kind of crazy things. It’s kind of a non-traditional arrangement: There’s a big, long outro, and that felt really fresh and cool to us. When we started working, we kind of wanted to stay on that path and maybe get a little more into songs that sounded like the future, or meshing a couple things that weren’t supposed to fit together, like really lush string sounds and hip-hop drum machines.”

The result is an album that features no acoustic guitar, a heavy reliance on synthesizer and other out-of-the-box approaches to instrumentation and arrangement. “We wanted to push the acoustic piano back to the corner of the room, and maybe put the acoustic guitar away and try our hand at some other stuff,” Pope says.

A disheartening calendar year also played a role in shaping the sound of Hot Thoughts. The influence of Prince and David Bowie, their legacies fresh on the band’s mind, can be found in the titillating “Hot Caress” and “Can I Sit Next to You.” For the latter, Pope even admits to a slight melodic nod. “It originally started out on a stringed koto, which gave it kind of a ‘China Girl’… feel to it,” he says.

Additionally, “Tear It Down,” with its refrain of “Let them build a wall around us/ I don’t care, I’m gonna tear it down,” took on greater significance. “We were working on that one pretty early on in the record—early 2016,” Pope says. “I remember the first time Britt [Daniel] sang that lyric. I was like, ‘That’s great. It’s very relevant to right now, but Trump’s not going to win this election. That isn’t going to mean anything a year from now.’ And here we are.”

There’s no longer a need for Spoon to prove itself, but with Hot Thoughts the band has delivered a captivatingly catchy record with plenty of sonic deviations and intrigue. The group’s schedule for the rest of the year speaks to that end, with jaunts across the States alongside Tennis, the Shins and the New Pornographers, among others. “We’ve got stuff lined up for a long time,” says Pope.