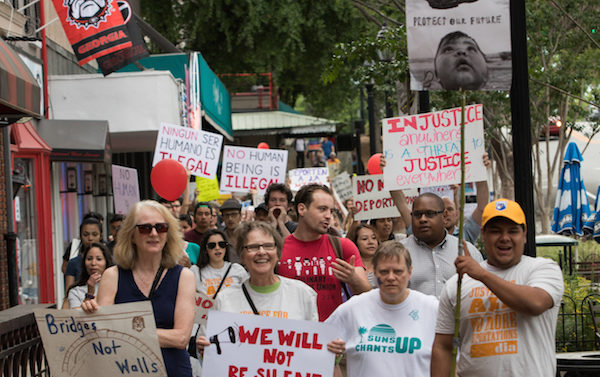 At least 150 people gathered in downtown on Monday—May Day, or International Workers’ Day—to protest the deportation of undocumented immigrants in Athens.

“In our community there have been many cases of deportation,” said Beto Mendoza, coordinator of the Athens Immigrant Rights Coalition, which organized the rally.

In many cases Immigration and Customs Enforcement has split up local families by arrested and deporting parents, while the children, who are U.S. citizens, stay behind, he said. Those families need support from the community because often they’ve lost a breadwinner.

While many acknowledge the positive economic impact of “Chicano” immigrant communities in the U.S., their cultural contributions are still not often recognized, Mendoza told the crowd before the march began.

“We think our food, our music, our language is embued in this nation, in the South,” he said.

Demonstrators marched from First Christian Church at the corner of Pulaski and Dougherty streets, past City Hall to the Arch, then to the county courthouse.

Immigrant rights groups marched in cities across the country Monday to oppose crackdowns on undocumented immigrants under both the Trump and Obama administrations.