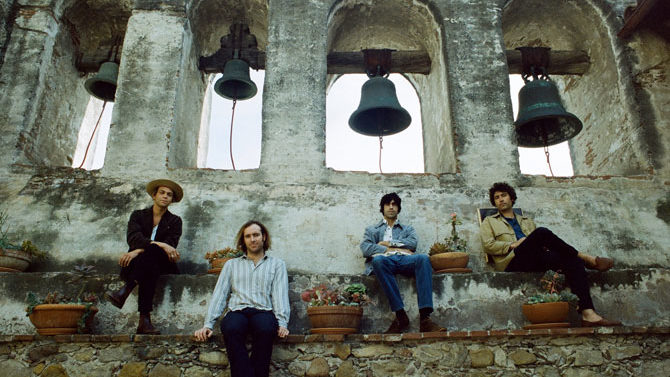 The four-piece Los Angeles band Allah-Las, which includes three former employees of the legendary Amoeba Music store, bonded around a shared appreciation of 1960s garage and psychedelic rock. But though Allah-Las are built on a foundation of that style, the band’s music applies a modern-day sensibility.

Siadatian says time spent working at a record store helped expand his musical world. “Working at Amoeba was like working in a library,” he says. And the group kept on learning: As the four musicians became more familiar with the process of making records, they took on a more involved, collaborative role in their music’s production.

“On our first two records, we had some involvement with the production,” says bassist Spencer Dunham. Those sessions were produced by Nick Waterhouse, an artist in his own right. “We were mostly involved in listening back and making sure that the sounds were what we really wanted. But we weren’t necessarily working the engineering console or setting up microphones.”

In the early stages of developing what would be Allah-Las’ third album, the band spent time making demo recordings with producer Kyle Mullarkey at his studio in Topanga, CA. “When it came time to record Calico Review, it seemed like a good match to have the people we had been working with help engineer and produce the record,” Dunham says. Calico Review‘s production is co-credited to Mullarkey and the band.

Another change was the use of select outside musicians to expand the group’s sonic palette. While the band’s members—Siadatian in particular—are adept on multiple instruments, Dunham says that “sometimes people in the studio have specific musical talents.” Session musicians on Calico Review include keyboardist Thomas Dolas of the band Mr. Elevator and the Brain Hotel, and string player Laena Geronimo.

Even though Allah-Las are relatively young as a band, they’ve already observed some significant personal milestones. “My fondest memory is from around the time we put out our first record,” Dunham says. “We got an email from a friend; he sent us a photo of Primal Scream’s Bobby Gillespie at Amoeba, holding up our record… and smiling!”

Siadatian cites the release of the band’s first single as another milestone. “Catamaran” was released in 2011. The B-side, “Long Journey,” is a cover of a 1965 tune by Rudy Wyatt and the Roots, an obscure garage band from Greenville, SC. Wyatt is reportedly a fan of Allah-Las’ cover, and has seen the band live when they’ve played this region in the past.

The group has come a long way in a short time. As recently as 2013, Allah-Las were second-billed on a three-band lineup with like-minded acts Elephant Stone and headliners The Black Angels. Today, Allah-Las are headlining their own tour, bringing along a supporting group from New South Wales, Australia. Similarly rooted in ’60s styles, The Babe Rainbow makes music that’s more pop-oriented than Allah-Las’ darker sounds. The Australian band’s four-song, self-titled EP was released in 2015, and the dates opening for Allah-Las mark the trio’s first tour of the U.S.

Allah-Las will crisscross the country in March and April, hitting 20 cities. “We never thought it would go as far as it has,” Siadatian says. “It keeps snowballing. Knowing you have an audience in some of these places is pretty incredible.”