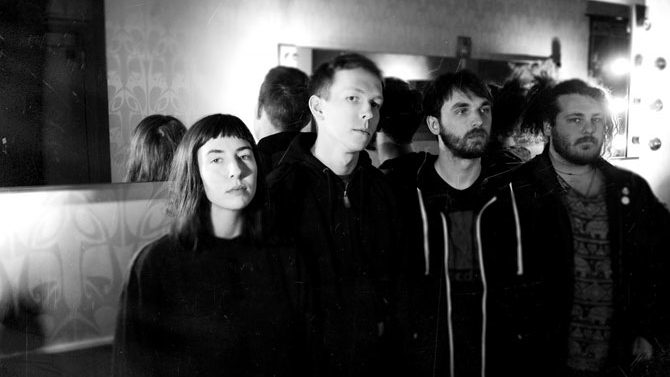 It’s the middle of December. Trees are bare, temperatures are falling, and it’s getting dark at like 4 p.m. Which means… we’re nearing the end.

Of the year, we mean! Although 2016 wasn’t the cuddliest, most lovable year in recent memory—and, let’s be real, 2017 ain’t exactly killing it on the reasons-to-be-hopeful front—in the world of Athens music, at least, there has been plenty to celebrate.

Indeed, we’ve been heartened by steady upward and outward creative movement over the past 12 months. From specific bands and albums to concert experiences and broader scene developments, here are 16 things we loved about Athens music in 2016.

Although women have always had a presence in the Athens scene, 2016 saw a powerful surge of female-fronted or majority-female acts, all of which kicked serious ass.

Mothers received international success and recognition for their tender, folksy debut, When You Walk a Long Distance You Are Tired. Nihilist Cheerleader ruled the punk scene with tons of high-energy performances around Athens and all over the Southeast. Jianna Justice basically became a household name locally, reviving a dormant twee-pop scene with tracks like “Twenty” and growing creatively with each release and intimate performance. Although the newly formed Pansy has only played a few shows, its deconstructed glitter-punk sound identifies the group as a formidable addition to the scene.

Women have thrived in our predominantly male music scene for years, but it seems they’re finally getting the spotlight they deserve. Local female artists are enjoying more airplay on community broadcasting platforms, more honest and objective publicity in the press and a more involved audience.

There’s no doubt women still face hardships when it comes to the industry, and there’s still work to be done in Athens. But if 2016 is any indication, local ladies are just getting started. [Maria Lewczyk]

General consensus on 2016 ranges from mild malaise at best to downright despair at worst, but Athens music had some stellar accomplishments in between all the moments where hope seemed lost. In our case, the hard work of several established bands paid off, ushering in a new wave of projects that began to stake their own claim around town. Label signings, releases and plenty of touring for groups like Mothers, Muuy Biien, New Madrid and Arbor Labor Union left a void to be filled back home by a plethora of up-and-coming talent, including Wanda, Neighbor Lady, Linda and Juan de Fuca. [Andy Barton]

Throughout 2016’s fantastically fucked-up election season, some of Athens’ highest-profile musicians gave us reason to be proud. Drive-By Truckers preached progress with their marvelous, mutinous American Band album, continuing to risk backlash from their mostly white, mostly Southern audience and even making the political-television rounds to talk protest music. And R.E.M.’s Michael Stipe and Mike Mills were among the most outspoken celebs when it came to taking on Trump. [Gabe Vodicka]

2016 was one of the best years on record for Athens’ noiseniks and envelope pushers. Renewed senses of community and creativity flourished, as did sublime collaborations. Aside from several scene stalwarts stepping up their game, there were notable and new figures on the Athens scene, like Sean McDonald (MMM Sound) and Ryan Rudder (Echo Constant), as well as the live outlet of The World Famous’ Experimental Mondays series. [Gordon Lamb]

“It’s like gumbo—there’s so many different ingredients out here, and we’ve got a little bit for everybody,” local rapper Larry “LG” Gresham says of his hometown.

Athens has become a hotbed of hip hop over the past few years. With the hip-hop mecca of Atlanta sitting just over an hour away, many artists have historically flocked there in search of recognition and support. But 2016 saw the local scene grow. This year, some of Athens’ best put their heads together to create and promote their music.

“The unity has started to really come together, unlike in past years,” LG says. “People are really starting to work together, and it’s really getting serious. There’s a lot of artists coming out with different stuff, and new artists hopping on the scene. It’s getting exciting.” 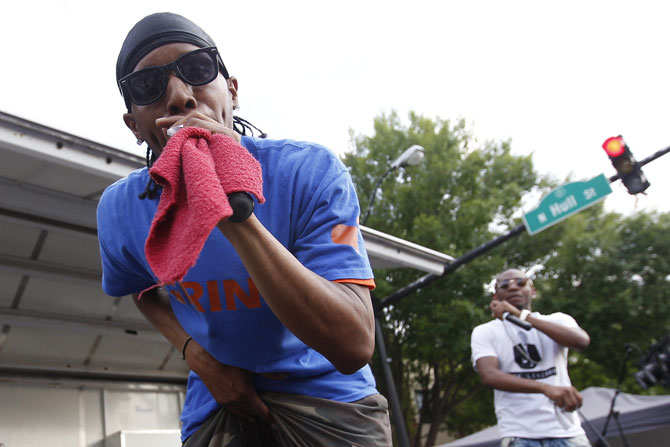 That unity was on display at the Athens in Harmony event at The Foundry on Oct. 30, where artists like Squalle, Blacknerdninja and Repunza performed and the community came out in droves to build positive relationships following social unrest nationwide. The event also exposed the lighter side of hip hop.

“In the past, I know hip hop wouldn’t have been anywhere near that event,” LG said. “But the fact that hip hop was able to participate in that event was big… It just kind of opened eyes to a whole new audience. It was love, and when those guys went up there and they performed, those people were really rocking with us… To me, it opened their eyes to another side of hip hop.”

Many local rap artists feel they are on the cusp of putting Athens on the map nationwide. Young stars such as Yung’N Restless, Tony B, Dictator and Profound, plus budding collectives like We’re Weird and Space Dungeon, made noise in 2016 and are names to watch heading into 2017. One performer, in particular, is destined for good things, says LG. “Yung’N Restless is like a silent assassin right now,” he says. “He’s just killing everything.” [Jeremy Johnson]

6. We Celebrated a Milestone

The fact that Wuxtry Records is still slinging vinyl downtown after four decades, with luxury condos now the norm and Urban Outfitters having moved in essentially next door, is reason to celebrate. Celebrate we did with a Flagpole cover story and blowout party at Little Kings in September featuring legends The Woggles and an appearance from author Rodger Brown, whose Party Out of Bounds reminds us that Athens will always be a creative hotspot, no matter what the real-estate market says. [GV]

Two of Athens’ strongest singer-songwriters are also Athens’ strongest power couple. Erin Lovett, who performs as Four Eyes, specializes in folky pop with a strong emotional bent. Patrick Brick, aka Futo, plays confessional electropop. Over the past few years, their releases have shaped and informed one another, creating a nearly unmatched run of consistently great music. Their 2016 albums are their strongest to date. In Futo’s Greatest Hits’ dedications, Brick refers to Lovett as “the only living person I write about,” and her presence is felt in every brief ounce of brightness that shines through the often dark album. Brick is listed as a co-producer on Welcome to Earth, and the collaboration resulted in a new level of quality for Four Eyes. Here’s hoping they stay together forever, for all our sakes. [Nathan Kerce]

Everything seemed to click and coalesce this year for the overlapping worlds of dance, electronica and remix culture. Vaporwave, which reared its head fully in 2015, became less of a branding tool and more of a point of reference. No one led this charge more than the Plus 100 Records label, with its solidly global reach. Others of note included the genre-shifting Astroshaman/Bills Clinton and the deeply informed EDM compositions of DJ Variant. [GL]

9. The Past Blasted Back

Three of the most pleasant surprises of the year came courtesy of local groups that were thought to be either dormant or long gone. In May, we got a self-titled album from post-rock warriors Japancakes, the band’s first record in nine years and its first-ever to feature vocals. Of course, there was Cinemechanica’s triumphant return in September. And last month saw the release of Post, the first album in 25 years (!) from Classic City mood-rockers Seven Simons. [GV]

10. Athens Returned to Its Roots

Many recent success stories have reached new audiences without commercial airplay or major-label backing, such as former Buffalo Clover singer Margo Price and Atlanta-based Southern rockers Blackberry Smoke. These artists toiled in obscurity for years. Like DIY punks, they toured nonstop, perfecting their craft instead of hobnobbing with industry types. This path of most resistance intrinsically breeds the type of earnest, heartfelt songs craved by country purists.

One local taking the long way is Daniel Hutchens, a 30-year veteran of the Athens scene known best for his work with rockers Bloodkin. A solo album, The Beautiful Vicious Cycle of Life, arrived in the spring, and exhibits much of the roots-based charm that’s made Sturgill Simpson and Jason Isbell household names. His gritty approach is a little bit Haggard and a little bit Springsteen, so it should appeal to Americana fans as well as his preexisting rock audience.

Hutchens isn’t the only local artist whose mastery of roots-based sounds deserves a listen at a time when Chris Stapleton somehow seems less out of place on a pop-music awards show than Queen Bey. Caleb Keith and the Calaveras and Grassland String Band are two more groups whose 2016 releases would sound at home on a playlist of recent and real country. [Bobby Moore]

11. It Became Cool to Dance Again

Normally, a band plays a few songs, people nod their heads, and that’s about it. Something about 2016 inspired more upbeat jams, more bouncing around and more group grooving. Much local music released this year—see The Quiet Pack’s “Let’s Make Some Plans” or Scooterbabe’s “Scooterbabe 2”—had stronger beats, catchier riffs and simpler, more repetitive choruses, making it easy to dance and sing along with, even if you were hearing it for the first time. [ML]

12. We Grooved With the Groceries

Set among a vegetable garden run by students in the Athens Land Trust’s Young Urban Farmers program, the West Broad Farmers Market in 2016 wasn’t just a charming alternative to that other Saturday market, but a chance to discover a variety of musical acts, like one-man band David Court, teenage rockers Cheese Dream, gospel singer Zeke Turner and the Palms of Fire drum circle. Booked by manager Sallay Jabbie, outreach coordinator Jessica Brooks and the rest of the market team, each provided a mood-enhancing shopping soundtrack and a great start to the weekend. [Marc Schultz]

It wasn’t exactly an atypical 12 months for local composer Killick Hinds, whose creative fecundity has always been mind-boggling. But his work in 2016—which spanned 14 releases, all available on Bandcamp—seemed newly energized. From the hip-hop-influenced Swerve Inversion—a team-up with poet Life the Griot—to the Henry Kaiser collab Xenosynchronicity II, Killick’s turbulent music provided a fitting soundtrack to a dark and stormy year. [GV]

Of all the venues in town, none captures the same feel as the Pity Party Social Club. Founder Taylor Chicoine has created a safe, calm space away from the hustle and bustle of downtown where people can enjoy intimate sets by their favorite local artists. Pity Party also records videos of the performances, capturing the down-to-earth interactions between band members and their audience. Athens’ music-video scene is on the come-up, and Pity Party is blazing the trail. [ML]

UGA’s student-run radio station has long been known as one of the best places listeners can be exposed to local music. But the station is also a breeding ground for that music. In 2016, WUOG’s young staffers had a notable impact on the year in local sounds.

Also part of Pansy is DJ Conor Lacey, whose solo project VHS Collectors Club put out its first EP, Amateur Hour, this summer. There’s also DJ Jianna Justice, who made a name for herself last year with two excellent EPs. 2016 saw her turning her self-titled project into a full band and releasing a few singles before heading to study abroad in Oxford.

Justice was also a major player on the debut album from Scooterbabe—which itself is led by former music director JJ Posway—providing backing vocals on nearly every track. 2016 has been a great year for local music, and WUOG has had one hell of a helping hand in getting us to this point. [NK]