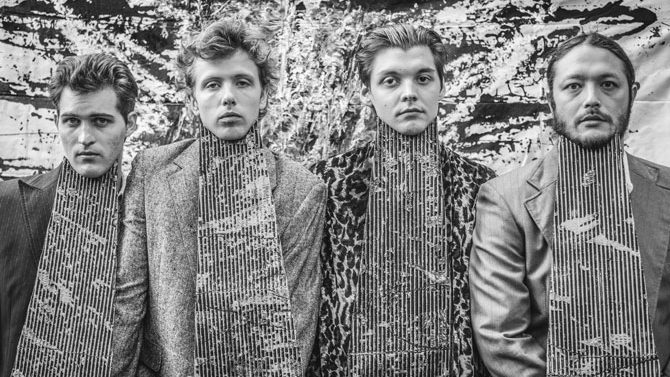 Amid the carefree abandon of New Year’s Eve, the night typically provides an opportunity for reflection. It may present itself early on in the evening before meeting up with friends, or it may sneak up suddenly, as the midnight countdown approaches. Whatever the case, one takes stock of the past year and begins to develop plans for moving forward. What didn’t work out? Where does one go from here?

As those thoughts began to seep into the minds of countless individuals across the world last Dec. 31, Muuy Biien was already putting its plan into action. The punk group, whose members call both Athens and Atlanta home, took the 40 Watt stage an hour before Times Square’s televised ball drop. Anyone familiar with the group’s signature hardcore sound had no clue what was going on. The lights were dim and cold, the air was thick with fog, and the music itself provided a newfound sonic atmosphere touched on previously only by the band’s ambient instrumental recordings. The songs were a little slower, a little funkier, even, and—wait, was that John Fernandes on violin?

“Naturally, that was kind of how I saw [Muuy Biien’s early music] at the time. It wasn’t something I thought I was going to be doing now, but [I thought], ‘In order for me to get to where I need to be, I need to get [that] out of the way,’” Evans says of the band’s initial releases: a five-song set of his own 4-track recordings and the band’s debut, This Is What Your Mind Imagines, a smattering of raucous, breakneck punk and experimental drone. Muuy Biien cemented and capped off this formula with what the group considers its first true full-length, D.Y.I., released on local imprint HHBTM Records in 2014.

From there, the band consolidated its lineup and began approaching songwriting in a more collaborative fashion. Muuy Biien is now a four-piece comprised of its most consistent players: Evans, Rapp, Lake and bassist Parks Miller, who’s played with the band for some time but makes his recorded debut on the band’s brand new LP, Age of Uncertainty.

“Now that we’re all working together a little bit more, there’s just this other element of a rhythmic, funky nature to the newer stuff,” says Lake, describing that as the biggest overlap in interest and style for the group’s four members. Recorded live to tape with minimal overdubs at Chase Park Transduction and pieced together with other material Evans and Rapp had recorded, the album’s groove and bite showcases a band now closer to The Birthday Party than Minor Threat.

The foursome wasn’t just bouncing ideas off each other more freely—they openly accepted contributions from outsiders, too. Although the band has worked with others in the past to record and help produce, they say Athens veterans David Barbe and Fernandes had an instrumental role in helping shape the sound of the record.

And underneath the slinking groove of Miller’s bass lines and Lake’s accented snare pops, there’s also a noticeable change in the music from a lyrical standpoint. Though still uniquely Muuy Biien in tone, Evans says Age of Uncertainty is “not as personal.”

“D.Y.I. was a lot of inward thinking and a lot of paranoid shit,” he says. “Ridiculous stuff.” This time around, he chose to write from a more thoughtful and observant place, taking on morality and public shaming in one fell swoop. The title, then, characterizes both how the band viewed its future at the time of writing and recording as well as the broader cultural climate.

“I think with time… it’ll make more sense later, but that doesn’t make it bad or unapproachable now,” says Evans of the album. “I don’t know if old fans are going to dislike this record as much as [say], ‘Oh, that’s catchy, I like this,’” says Rapp. “It’s not watered down at all. It’s not a cop out. We didn’t go pop or anything,” he adds. “I feel like it’ll just have a broader appeal.”

Indeed, it does put the band in a strange position—releasing a record it’s proud of, showcasing a sound it’s been building upon and moving forward with for over a year, while the public’s reception and reaction remains up in the air. Even so, Muuy Biien continues to move forward, a little surer of where it’s going.