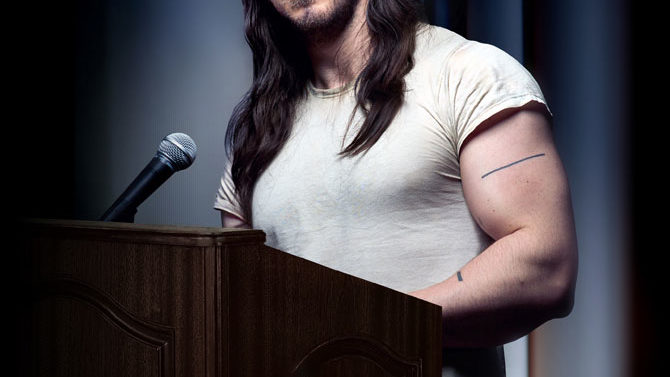 It has been just over 14 years since rock and roll innovator and popular media personality Andrew W.K. last performed at the 40 Watt Club, but he still hasn’t forgotten that night.

“I remember that night very well for a variety of reasons,” he says. “It was the one-year anniversary of 9/11. It was extraordinarily hot, and I was really exerting myself. As soon as I got off stage I vomited. It actually felt really good. Most people are familiar with this—your body only vomits when it needs to feel better. It was kind of a euphoric feeling.”

On Saturday, W.K. returns to the 40 Watt on his “Power of Partying” speaking tour. Though W.K. is primarily known for his rambunctious punk songs and frequent TV appearances, he has spent the last 10 years giving lectures about his unique, positive outlook on life. This specific tour comes on the heels of the creation of the Party Party, W.K.’s somewhat tongue-in-cheek attempt to enter the 2016 political process with a platform that centers around bringing communities from all across America together—to party.

But what does it mean to party? To W.K., the word has a deep, almost primal origin.

“The best way to describe it is that all of my efforts in life are to conjure up a kind of raw energy,” he says, before admitting, “It is a bit indescribable. How do you describe the feeling music gives you when you like a song? How do you describe the feeling you get going down a rollercoaster? Is it happiness? Sure, but this goes beyond a mood. There’s something physical about it. It involves nearly every aspect of your being.

“I thought maybe the best way to describe that situation was as a life force, a sort of vitality,” he continues. “This feeling of not only being alive but being glad that you’re alive. My whole goal is to just try and immerse myself in that feeling personally. It helps me feel better about life and all its struggles. That’s partying.”

While some labeled the Party Party as a joke, W.K. says it came from a place of genuine desire to help people. “The Party Party was just another attempt to conjure up that energy I described, but in the political realm. I’m not a politician. I don’t have much to offer to politics, but I always have something to offer to partying.”

Unfortunately, the Party Party didn’t make it to the voting booths this year, but the basic spirit of bringing America together has transferred over to this speaking tour, for which W.K. is hitting all 50 states in just three months, a goal he says he’s always wanted to achieve.

“I believe I’ve performed in every state in some capacity, but I’ve never done one tour where I hit every state back to back,” he says. “There’s always that basic feeling of not wanting to leave anybody out. Nobody’s left out of the party. Also, for my own sake, I wanted to feel this connection to the entire nation. To be bonded and to travel through the whole realm. The spirit of embracing the entire United States is important to me.”

W.K.’s lectures are not typically pre-prepared and feature no visual aids or notes for him to read from. Similar to how he writes his music, he’s speaking solely from the heart and mind. It’s because of that, he says, that his performances—musical or otherwise—always have the same result.

“I’ve talked to so many different people who don’t like my music, or even rock music in general, who were able to get a shred of a positive feeling through either an interview they read or hearing me speak on the radio or reading something I wrote,” he says. “So I wanted to be able party with those people too. I wanted to use any means or mode of partying that I could to connect with people and to connect with that feeling myself.

“I’m not ashamed to say that a lot of what I do is for my own good. Being happy about life has not come easily to me for as long as I can remember. So a lot of my efforts are to cheer myself up. Sometimes I feel like my life depends on being able to do this. Fortunately, if that kind of thing works for one person, it usually works for other people too.”

While he does plan to have a new album out “relatively soon,” until the end of this year W.K. is focused on traveling across the country and preaching the power of partying—something that, when looking back on it, he’s been doing for his entire career.