With Players of the Lyre, Misty Alfonso Honors a Fallen Friend 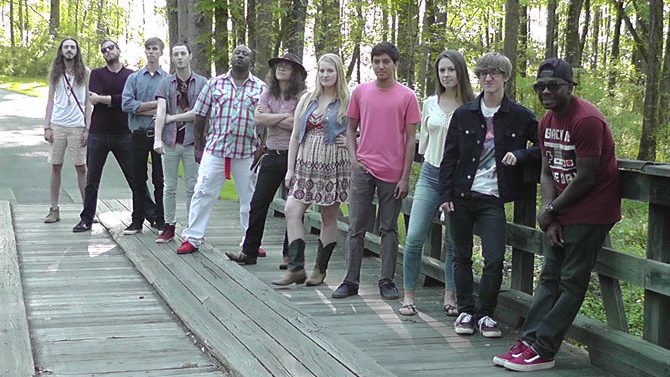 When Misty Alfonso and her company Duck Cloud Productions began work on the Players of the Lyre album and documentary project, she never expected it would be in memory of her best friend, Shannon Lay.

“That was a place my mind wouldn’t even go” says Alfonso. “This benefit was always going to be dedicated to her, but… my prayer was that she would just be able to hear the album, go to the concert, see the documentary, that she would see all the hard work we put in.”

Alfonso and Lay met when they were both just 10 years old and living in Oconee County. “I was a really shy kid [who] didn’t talk much. Shannon was the complete opposite,” says Alfonso. “She made sure nobody ever messed with me.”

For decades, Misty and Shannon’s friendship remained strong. Both women battled cancer at different points in their lives. “Shannon had lost her mother to cancer,” says Alfonso. “So the disease was on our radar even back when we were young… Shannon’s first rodeo with cancer was not even 20 years ago—she had breast cancer and had to get a double mastectomy. She went into remission, though she did develop autoimmune disease as a result of the battle.”

Last Christmas, Lay received horrible news. “Shannon had a pain in her side [that] got to the point where it was unbearable, so she went to go see a couple of doctors to get it checked out,” says Alfonso. Lay was diagnosed with lymphoma.

From there, Alfonso outlined plans for an album, a documentary and a celebratory concert. For the album, 20 different local artists were paired together to write 10 songs, with only two rules: The collaborators had to have never worked together before, and their songs had to be about cancer.

Though she would go into remission from her lymphoma, Lay developed stomach cancer earlier this year and died in August. After Lay’s death, the album took on new meaning for all involved.

“I pretty much lived at the studio,” she says. “Watching the artists record kind of became my therapy. The artists really came to love her, and they felt it when she passed away. I feel as if they stepped it up a notch to really honor her memory.”

Though it comes under tragic circumstances, Alfonso is proud of how everything turned out. “I have a few favorite tracks. One that’s really eclectic and unpredictable is the collaboration between Seth Hendershot and Blacknerdninja—that may be the most unique track out of the bunch. I also really like ‘Love Will Get Me Through’ by Elite tha Showstoppa and Justin Granados. It’s so upbeat and positive… I don’t think any song on the album uses the word ‘cancer’ at all, which is amazing.”

Made in conjunction with the album is a documentary in which Lay played a significant role that will see release in November. It covers the subject of music therapy for cancer patients, as well as the making of the album. According to Alfonso, it’s “an ambitious attempt to prove that music can be physiologically healing” inspired by an incident where she watched a live harpist play to patients on the chemo floor at Emory hospital in Atlanta.

Saturday’s benefit concert for the American Cancer Society features 15 of the artists on the compilation, including Caroline Aiken, Conner Tribble, Cortez Garza and others. “I have no idea what to expect out of the show,” says Alfonso with a laugh. “The reason I say that is because, outside of AthFest, not much like this has ever been attempted before.”

While she is heartbroken that Lay passed away before this project was completed, Alfonso knows her work was not in vain. “I still feel Shannon is here with us in many ways, and I think she does see all the work we’ve put in. It’s just from a different place than we thought she’d be.”