With Deep In the Well, Vincas’ Profile Continues to Rise 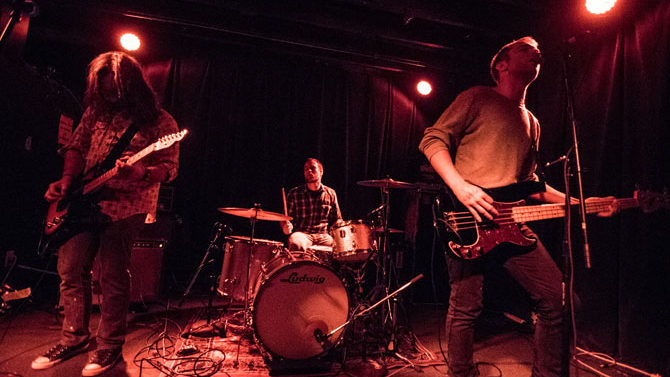 Athens and Atlanta-based noise-rockers Vincas’ forthcoming second album, Deep In the Well, simmered in the minds of bassist and vocalist Chris McNeal, guitarist and vocalist Scott Kviklys and drummer Joe McMullen for over three years. That wait has been a blessing in disguise, with Athens’ heightened profile as a noise-rock destination landing the long-awaited LP on Minneapolis label Learning Curve Records.

The wait was in part due to an unorthodox creative process that sometimes leaves McNeal’s ideas dormant.

“I had the bass and drum part on ‘Unburied’ down for almost a year before we finished it,” McNeal says. “There’s probably like 30 versions of that song. It’s kind of insane. But there’s also songs on the record we wrote in three minutes at practice. Half of it is super organic and fast. For the other half I’m like, ‘Why is this taking so long? It’s not Pink Floyd. I’m not writing The Wall here, dude!’”

Most songs began with McNeal humming an idea for a melody or riff into his cell phone. Those ideas often became rough demos of proposed lyrics and bass parts, waiting to be fleshed into songs by Kviklys and McMullen.

“It’s strange sometimes to kind of weave in guitar, but that’s how we’ve been writing since we’ve been playing together,” McNeal says. “Sometimes I’ll throw down a little guitar as a placeholder to help Scott, but usually I let the guys do their thing. We’ll work around it with drums and guitar, or it gets thrown away.”

McNeal also performs with Athens-born post-rockers Maserati, and his song ideas usually suit one band more than the other.

“Most of the time when I sit down to write with this band, I’m in a more aggressive headspace,” he says. “There’s been a few times when I thought a bass line for Vincas sounds more like spacey jam stuff I can use for the other guys. I almost used the bass line from the last song on the record, ‘Lost Spectre,’ as a Maserati song. I kind of approached it like a Can song with the rhythm and everything, which is strange for this band but not for Maserati. It’s cool to do something like that with these guys.”

The end result of this grueling process is Deep In the Well, a worthy successor to Vincas’ 2012 debut, Blood Bleeds. At times, the new album is a swift, violent display of noise-rock brawn with a hint of psychedelia, as on “Not Home” and “Hammer.” The slower, haunting rhythms of “Death March” and “Unburied” maintain that aggression while sounding like sped-up stoner jams.

Once the album was complete, McNeal sent it to Mike Keenan, lead singer of Atlanta rockers Hawks. Keenan passed the recordings along to Rainer Fronz of Learning Curve, who agreed to release the album. “He was the second person we sent it to,” McNeal says. “It worked out pretty quick, which is great, because I was super stressed out about spending a couple thousand dollars to press it myself and hack my way through being a fake record label dude.”

Both Vincas and The Powder Room are recent Learning Curve signees. McNeal sees this sudden outside interest in loud, heavy rock and roll from Athens as a direct effect of The Powder Room and Motherfucker’s willingness to tour and put effort into sharing the city’s poorly-kept secret with the Midwest.

Vincas will also tour in the fall, spreading the good word of both Deep In the Well and Georgia’s booming noise-rock scene—once a couple of hurdles are cleared. First, fill-in drummer Tim Payne (Powerload) needs to learn the band’s set. (McMullen is taking a break from touring because his wife is having a baby soon.) Also, the longstanding curse on Vincas’ tour vans needs lifting.

“I think I’ll bite the bullet and buy something kind of nice this time,” McNeal says. “The last two were shitty medium-grade vans that lasted a hilariously short amount of time. My drummer bought one he paid $3,000 for and it lasted one trip to Atlanta. The head gasket exploded. I bought one and it lasted two weeks total, so I’m definitely gunshy on the van thing.”