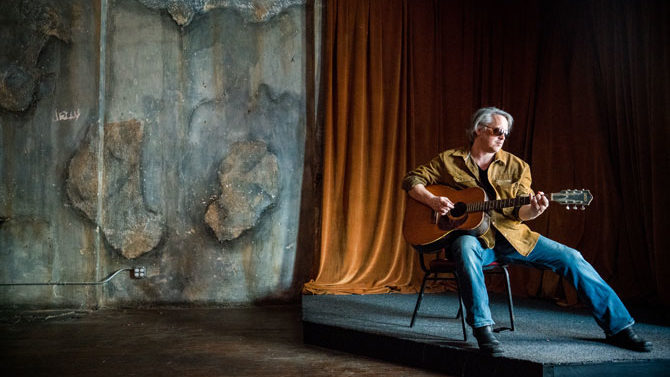 Local musician and Bloodkin co-founder Daniel Hutchens’ status as one of Athens’ most gifted songwriters remains intact on his latest solo album, The Beautiful Vicious Cycle of Life. It’s an honest slice of Southern storytelling that should resound with fans of the current mainstream crop of roots-based songwriters.

For the uninitiated, Athens-based rock band Bloodkin formed not long after Hutchens and childhood friend Eric Carter relocated here in 1986 from Huntington, WV. “At that time, if you were playing music in Huntington, you pretty much had to be in a Top 40 cover band to get a gig,” Hutchens says. “When Eric and I got to Athens, it was like heaven, because it was the reverse. You were expected to get up and do your own material.”

Hutchens made the most of living and playing in a songwriter-friendly town, building a reputation that by the ’90s had him touring and recording with the Velvet Underground’s Moe Tucker. More notably, Hutchens’ peers Widespread Panic netted a hit with their 1994 cover of Bloodkin’s “Can’t Get High.”

Parts of Bloodkin’s ongoing story are marked by life on the road’s many pitfalls—the group’s 25th-anniversary box set is appropriately titled One Long Hustle. Today, Hutchens enjoys the stability of fatherhood. “Probably the biggest difference in my life now is that I have kids,” he says. “That’s obviously a game changer that changes your perspective in a lot of ways. Your life situation is bound to reflect in your songwriting. But I still play rock and roll, and there’s hopefully still a lot of impulse and spontaneity and fun in that.”

“The people I always listened to are people like Neil Young, who’d do the Crazy Horse rockers and the gentle acoustic stuff too,” Hutchens says. “I never saw any reason to pigeonhole yourself into one tempo or type of song like that. Even listening to bands around here when I first moved to Athens years ago like Drivin’ N Cryin’ or R.E.M.—those guys covered a lot of territory. I always thought that was cool and interesting. It keeps things fresh for me.”

Hutchens’ newest album reflects his open-minded approach to songwriting. Like Steve Earle before him, Hutchens sometimes erases those thin lines that separate rock, country and folk, as heard on B-side opener “Touch Up Time.” Other tracks pay homage to specific styles, such as the serene and surreal “American Country Ghosts.” In this chilling tale, deceased country legends warn a 90-year-old about her son’s reckless lifestyle. It resembles Sturgill Simpson’s unorthodox yet successful approach to country songwriting. Hutchens embraces his rock roots as well. The title track borrows from blues-rock traditions, while “Pretty Girls in Summer Dresses” and “Epitaph Town” could pass as John Fogerty deep cuts.

You have to be true to yourself and do what you feel.

Bloodkin bandmates Carter and William Tonks, Widespread Panic’s Dave Schools and Duane Trucks, David Barbe (Sugar), Coley Dennis (Maserati) and Thayer Sarrano are among the local luminaries who appear on The Beautiful Vicious Cycle of Life. Schools and Barbe double as the album’s producer and engineer, respectively. “Although it’s a solo album technically, I did not make the record by myself,” Hutchens says. “Essentially what we’re talking about is it’s a different group of people than my long-term band… It’s still a collaboration.”

Hutchens and friends’ end product arrives at a time when his roots-oriented approach syncs up with the popular sounds of Jason Isbell, Chris Stapleton and recent Athens visitors Alabama Shakes. But it’s not a matter of capitalizing on a trend, as Hutchens is merely following his heart.

“I’ve loved that type of music all along,” he says. “It just seems to me like if you’re around long enough, you’ll see things go around in cycles. Sometimes the music I love has been more or less in vogue. It’s the kind of music I love, and it’s what I like to do. Anything else seems unnatural to me. The way I look at it is you have to be true to yourself and do what you feel.”

After all, it’d be nearly impossible for even the most seasoned songwriter to force roots-rock and country’s earthy honesty for the sake of profit.

“If your No. 1 motivation is to make money, that’s fine. There’s much easier ways to do it than the music business, I guarantee you,” Hutchens says. “You’re taking the long way around, man. The thing is, if you love it and do it anyway, hopefully you find a way to pay the bills and make it work for you.”

Hutchens isn’t alone in enjoying varied styles or collaborating with friends he’s known for decades. Nor is he the only veteran performer whose love for music survived the ups and downs of an eventful career. What sets him apart from most and validates The Beautiful Vicious Cycle of Life is an innate ability to maintain an earnestness that’s not bound to a genre, song topic or supporting cast.