The Practical Power of Eureka California 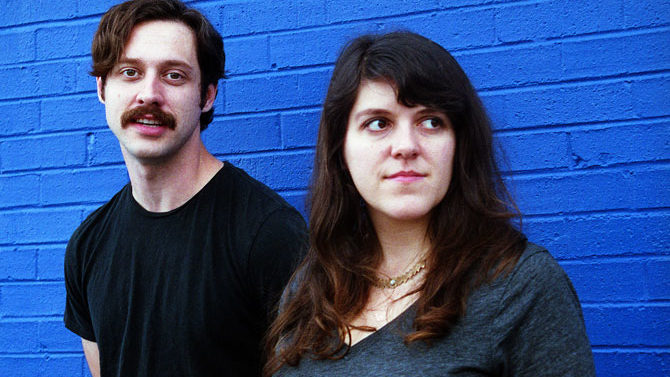 “This is more our speed,” says Jake Ward as he lifts a piece of Popeye’s chicken to his mouth. Cajun-tinged jazz is playing over the fast-food restaurant’s speakers, and there are two TVs—one in front of and one behind Ward and bandmate Marie Uhler—set to a low murmur. The first is on ESPN, which is airing a bowling competition; the second is tuned to CNN’s coverage of the Michigan Uber-driver murders. The family at the next table over is glued to that screen, except for the young daughter, who’s on the verge of a breakdown.

Uhler and Ward, who comprise the noisy garage-pop duo Eureka California, aren’t distracted. They just wrapped up a meeting with their label head, Mike Turner, and are in need of some serious sustenance. Among the topics discussed: upcoming tour dates; plans for the release of their third full-length album, Versus; and other, more far-off intangibles that need to be solidified. This is the calm before the Eureka California storm, which is fitting, given the dark clouds moving in overhead on Prince Avenue.

Up to this point, Eureka California has crafted the sort of high-energy, ramshackle power-pop that recalls Superchunk, Japandroids and Jonathan Richman. That’s not to say Versus, which the band will release Mar. 25 on Turner’s Happy Happy Birthday To Me Records, is a huge departure in terms of style or influences; they haven’t stopped writing straight-to-the-point rock songs with hooks and bite. They have, however, taken a big sonic step forward, which is even more distinct considering their two-person lineup and past recording approach.

“It was really just kind of super-sad DIY,” Ward jokes about the recording process for their first three records: the “Modern Times” 7-inch, Big Cats Can Swim and Crunch. Those were tracked primarily on Ward’s laptop with Pro Tools, using simple stage microphones. “When we did Big Cats, we didn’t even have mic stands,” Ward recalls, listing off Athens street names and the corresponding houses that served as recording locales for each release. “I remember we had to take down a curtain rod and crudely have the curtain rod hanging off the end of the couch.”

The experience was aggravating in a logistical sense, but it was all the more frustrating given the root of the problem: money. “Since we could only have two mics going at the same time and we only had so much input, we would have Marie play with headphones on to my amp so that my amp wasn’t really making any noise, and then we’d record all the drums. Then I would go through and record everything on top of that,” Ward says. “We didn’t really have a choice in doing that, because we didn’t have any money. We were super broke.”

“By Crunch, we had bought a mic stand,” Uhler chimes in lightheartedly. “Still not enough to buy a new computer or anything,” she clarifies.

Eureka California made the best with what they had, working multiple jobs at once to fund their endeavors. But good fortune was on its way. Over the summer of 2015, the band embarked on a UK tour booked by Turner, with plans during its final week to record a new album with Leeds producer MJ at his Suburban Home Studios. With a CV that includes credits on records by Leeds post-punks Eagulls and Welsh noise-pop band Joanna Gruesome, MJ’s involvement seemed ideal. Turner and MJ shared a mutual friend in HHBTM artist Jonathan Nash, who had played Eureka’s previous records for the Brit; likewise, Turner had played MJ’s records for the band. Both parties quickly became distant admirers.

With the songs well-rehearsed and road-tested by the tour’s end, the band managed to knock out recording in roughly three and a half days, mixing for just another one and a half. “It was really efficient,” says Uhler of the experience, noting how well the band’s personality matched with MJ’s. “With the wrong type of personality, there’s pressure,” she says.

“He was just really professional and really efficient and knew what he was doing,” Ward adds. “I mean, compared to how we were doing it before, it was like night and day. I remember so many times when we were recording, we would talk to each other and be like, ‘This is so much easier.’”

Steering clear of substances also made the process a smoother one. “We’re pretty mild. We don’t really drink,” says Uhler. “I mean, we used to do that stuff. And I know some people just do that all the time, like it’s their vacation, but we treat [touring] more like we’re going to work.”

Songs like “Everybody Had a Hard Year” and “Sober Sister” portray a newfound perspective, a look back on a life left behind. The former is a short acoustic number in which Ward reflects on personal hardships before making a final broad appeal, finishing the song with its titular line: “I grew a beard to hide my sins/ I spent all last year lonely and soaked in gin/ But I never thought to disappear/ Everybody had a hard year.”

The latter is a blistering track that could easily be passed off as a party anthem. Ward’s six-string is channeled through both guitar and bass amps as Uhler keeps the song from veering off course. The song’s breakneck pace easily buries Ward’s underlying concern, as he belts: “And it’s so sad that you never got the chance to see/ All of the beautiful things you could have seen in me/ Just before the start of the season/ I would drink them away for no apparent reason.”

Indeed, much of the new record sounds like a jet-fueled lamentation of the stagnation one can feel working and aging in Athens. But rather than cloaking those fears and regrets in dismissive one-liners, Ward lays them out plainly.

“I think with this record, more so than the other ones, I was really trying to write from an honest place and just be maybe more blunt than I had been in the past, or maybe more vulnerable on some songs,” he says. “I think, given Big Cats and then Crunch, the songs were always moving in that direction.”

The approach reveals a band more grounded than before—so much so that all involved are fixed in a state of firm realism. “Everything’s kind of moving forward in a natural progression in a way that’s really comfortable and really nice,” Turner says, taking a break from screen-printing T-shirts during his day off from Wuxtry. With many things coming together—a one-week, pre-release tour; slick posters for their release show; and filming underway for another music video—the pieces are in place for Eureka California’s biggest splash yet.

“I try not to put any [pressure] on records in that way,” says Turner, though he says he’s pleased with the band’s progress. “I like the pace that it’s happening [at],” he adds, before parting to work on some press emails for the band.

As focused as Eureka California is on the lead-up to Versus, gears are also in motion for out-of-state shows in April, a tour with label mates Witching Waves in May and a return to the UK this fall. Now, it’s just a matter of covering all the bases. “It is harder, the older we get and the more jobs we have, to take off huge chunks of time,” says Uhler, as the nearby tables become a little less noisy and the two finish up their meal.

Regardless of where they’ve been or where they’re going, Eureka California will always be a band to rally behind, a genuine pair of people who have never asked for much. “We’ve always, I think, tried to maintain that we’re the same exact people offstage as we are onstage,” says Ward. “It really is consistent.”