McIntosh County Shouters and Skillet Lickers Pay Homage to the Past 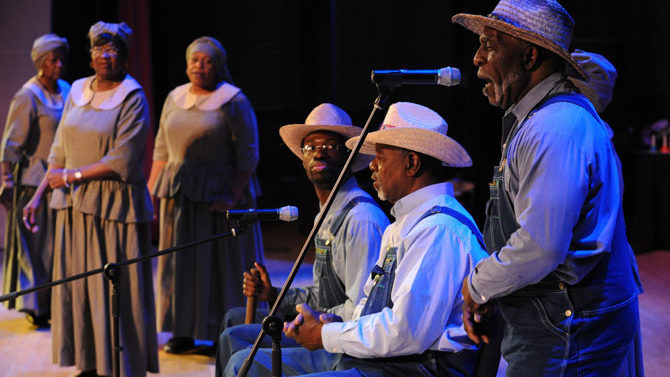 When you hear the word “shout,” you think of a loud sound from deep in the throat. But the term used by descendants of slaves in coastal Georgia, on the mainland near St. Simons Island, is derived from the Afro-Arabic term “saut,” the counterclockwise dance around Mecca, according to Art Rosenbaum, a folklorist, musician, artist, author and teacher in Athens. Rosenbaum, who is well-versed in Southern folklore, explains the history and meaning behind the shout as performed by the McIntosh County Shouters.

The shout isn’t a dance, and the shouters don’t refer to it as one. A dance is secular, while the shout is a series of movements with no crossing of the legs, and it typically has very deep religious connotations. A family tradition that has been passed on since today’s shouters’ ancestors were kept as slaves, the shout honors the original shouters, who had to shout in fields and in secret in wooden houses, using sticks as drums. Drums were banned by slave owners because they were thought to be used to signal and start slave rebellions.

Beginning the shout, the leader, who knows the songs, will start at a slow pace. “Basers” respond to the lead singer; the style is similar to call-and-response gospel singing, though the shout is much older. Percussive hands quicken the pace and then the sticks begin, beating tirelessly on a wooden floor. A narrator explains the songs to the audience. Though tradition and honoring of ancestors is an important part of the shout, personal variation is encouraged, and high standards of performance are desired.

Most songs are religious, and some tell stories going back to the days of slavery. “Daniel” is about a slave of the same name who was caught stealing meat. The song urges him to go away, to run from the master’s whip.

The shout is about movement. Members add their own variations, which range from “eagle,” demonstrated by outstretched arms, to “rock,” portrayed by a rocking motion of the body, to “run away,” as used in “Daniel,” in which the shouters reverse their counterclockwise rotation.

While the McIntosh County Shouters exaggerate some movements for audiences and display a little more showmanship and costumery, they strive to maintain authenticity. The songs and movements are embedded in history and evocative of a certain era; the group wears similar clothing to that of their enslaved ancestors, with their dignity in mind.

On Tuesday, Mar. 29, the shouters will perform in Athens for the second time, gracing the stage of the Morton Theatre downtown along with another group whose roots run deep: the Skillet Lickers, a Georgia string band that started in the 1920s. Four generations ago, Gid Tanner, a Georgia chicken farmer, was hired by Columbia Records to record the Skillet Lickers’ “hillbilly” music, according to their website’s biography. The record was phenomenally successful, and the band has grown into an influential group still led by the Tanner family.

Both the Shouters and the Skillet Lickers represent folk, bluegrass, gospel and other Southern styles of music. Though the styles and content of each are vastly different—strings and drinking songs versus sticks and religion—both have survived thanks to strong family ties.

Tuesday’s show will mark an important first: Though the McIntosh County Shouters and the Skillet Lickers are both native to Georgia, have historic beginnings and were highly influential to the development of Southern music, the two have never performed together.